The biggest and baddest control everything - and they know it.

Sometimes Life is Just a Day at the Zoo

Have you ever gotten an unexpected bonus? I have. About ten years ago, a mining exploration company that employed me was taken over by an operating gold company. This resulted in “golden parachute” salary adjustment and bonuses being paid out.

So, what did I do with mine?

Well, at that time, one of my brothers, an airline pilot, was continually gushing about how he enjoyed “the land down under” and how it would be a good idea to take a trip there. When you work very hard, get rewarded for it, and then have some time available to consider what to do next, that is the time that you are prone to suggestion.

In a matter of a few weeks, the decision was made – off to Sydney, Australia.

We spent a day or two in Sydney but made Manly Beach our “vacation base” for the duration of our two-week trip. “Manly,” as it is known, is a rather idyllic place along the sea with a long walkway that stretches from one end to the other.

There are places to rent surfboards, rollerblades, beach umbrellas – the usual tourist offerings.

One day, during a long morning walk to get coffee, fruit, and carbs, I noticed that the park benches we passed every day were made of stainless steel to prevent rust and stay looking smart in the salty air.

They were made of stainless steel tubing bent and folded over in the shape of a chair. These park benches must have cost a small fortune to make, both in materials and labor; stainless-steel welding requires more skill than melting and gluing back together items made from standard steel.

Good on the Australians for thinking ahead – regular steel would probably rust out in a very short time, but the much more expensive stainless variety would last much longer.

Then I noticed that almost all of the metal near the beach was also stainless steel, including the metal fittings attached to the side of buildings to hold up stainless steel rods that formed the framework for shade canopies. I remember thinking at the time that there would always be a good future for specialty metals.

After a week at the beach, well rested from the long flight and toned down from the natural excitement of being somewhere new and different, it was time for some day trips.

Naturally, a pre-requisite of going to Sydney must include a trip to the Sydney Zoo. So off we went to see what interesting things the zoo might have in store for us.

The wide variety of unusual animals, the collection of highly poisonous snakes, and the sounds of the different birds made the trip to the zoo a pleasant assault on the senses. We were taking it all in when our slow walk through the zoo led us to the caged enclosure that held our closest human counterparts – the chimpanzees.

Not only that, we arrived at the proverbial “feeding time at the zoo.” The chimpanzees were about to receive their meal and were making quite a commotion.

They knew what was coming next. I thought that I did too, but I apparently, I did not.

The chimpanzees formed a cluster around a zookeeper who had dragged a large plastic garbage container full of all kinds of different fruit into the center of the cage. With each step she made from the door to where she stopped, the chimpanzees got louder and louder and more aggressive with each other. Then, suddenly she unceremoniously dumped the fruit on the cement floor and quickly stepped aside.

The chimpanzees went into a frenzied free for all – pushing, biting, and screaming at each other as each chimp tried desperately to get the exact piece of fruit that another had its eye on as well. What a sight!

The biggest chimpanzee in the cage made his presence known by a loud, piercing cry that caused all of the other hungry chimpanzees to stop fighting with each other over the scraps of food and focus their attention on him.

Slowly and with purpose, the large ape pushed aside the smaller, weaker ones, took what he wanted, and then scurried up to the highest perch, well above the commotion that had resumed in earnest below him.

He proceeded to eat his meal alone and, when done, would rain down the leftover bits to the cage floor. He seemed to take particular pleasure when his discards hit a target that responded by emitting a yelping sound.

Now, I know what you are thinking, where is this story going?

Be patient just a while longer, and you will see.

Soon, the large ape had finished eating, and then he did something rather unexpected. He began urinating on the other apes. They quickly retreated out of range.

So, what made me remember “a day at the zoo” now, especially since it happened so long ago? Was it because we went to Sydney around Christmas?

What was I thinking about subconsciously?

Then it hit me.

It was the congressional testimony of the BigTech leaders. It was the expression on their faces as the government probed them over their censorship of the New York Times article on Hunter Biden. Where had I seen that “look” before?

Yes, that same crooked, concealed grin was on the face of that ape at the top of the cage. It was unmistakable. The haughty look that conveyed the same thing by the ape as it did for the leaders of tech:

At least 73 million Americans will understand the point of this article. The rest won’t. Maybe it’s best to strive for unity. You know, be an uniter, not a divider.

In the spirit of the Christmas season, I think it would be a charitable gesture for the 73 million to show a gesture of support and understanding of their 79 million counterparts by the act of gift-giving.

Since many on the Left prefer dark colors (remember ANTIFA and the rioters), perhaps a gift of a sweatshirt is just what the zookeeper ordered to remind them of exactly how the rest of us see the changes currently underway.

Enjoy the holidays and don’t put up with any “monkey business” – in these times, silence is not an option.

PS – here is a gift idea with a caption for the gift card: 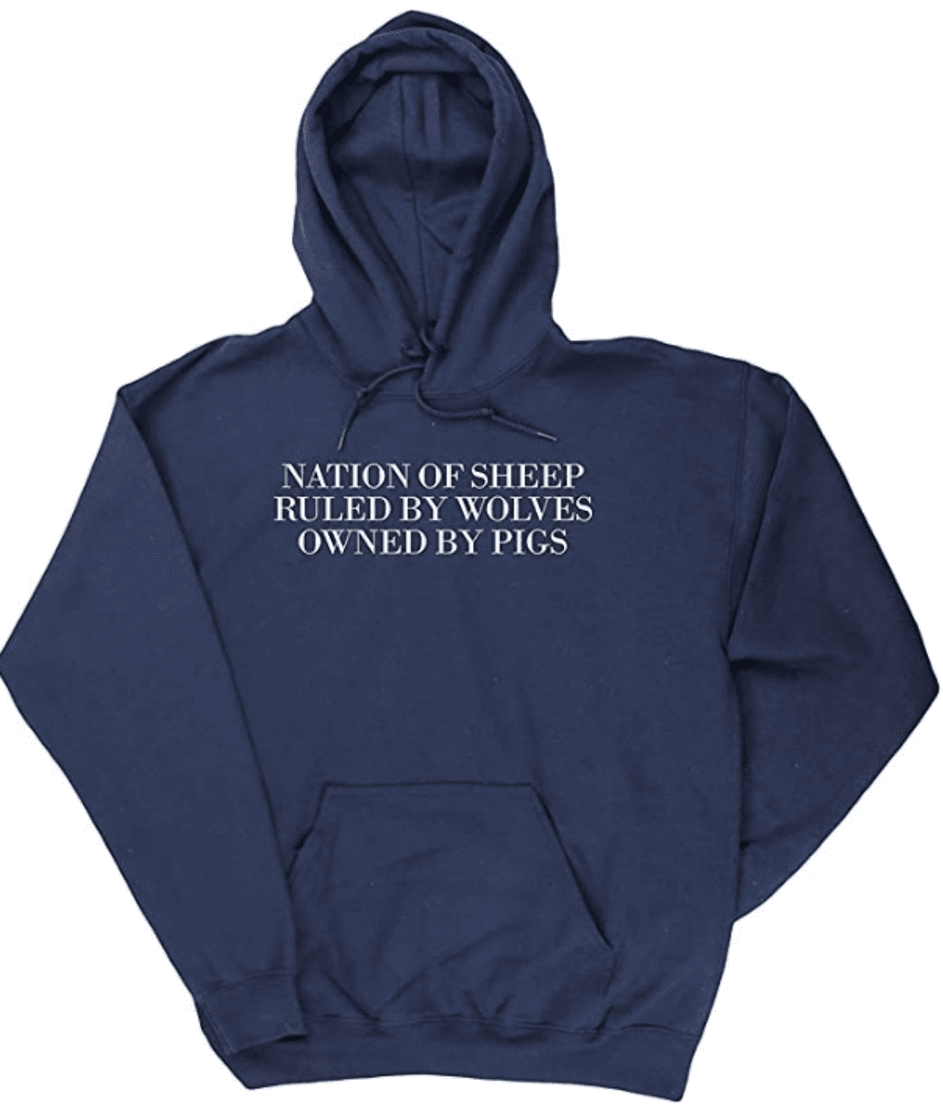