And why you shouldn't trust them. Here's what they really want and their plan to achieve it - and it's not what you think.

Here’s the hard truth about inflation.

And be sure to read this very carefully.

Because, contrary to what you’ve been told, the government does not have a plan to stop inflation.

Nor has that ever been the plan!

Sure, the Fed and other central banks have jacked up rates and offloaded some assets to tame inflation.

But now policymakers are compensating for this tightening with trillions of dollars in fiscal money.

Remember that $1 trillion in spending for energy subsidies?

Do they really think that pouring more money into the economy is the best way to fight inflation? Obviously not. Not even politicians are that stupid.

But with so much money swishing around, the government knows it can’t tame inflation without “rebooting” the financial system – a reboot they don’t want because equilibrium is not what they’re after.

In fact, equilibrium is exactly what they don’t want – especially when it might affect the the wealthy elites politicians answer to.

So they came up with a workaround.

Notice how people are already getting used to inflation?

It’s not that they’re happy about it, but once it peaked, they became somewhat complacent.

BUT inflation is still much higher than the Fed’s 2% mandate, which presents technocrats with a dilemma.

It’s become politically viable to keep inflation higher, yet the Fed is mandated to fight it.

So now they are calling to free the central bank of this mandate.

The supposedly non-partisan Economist even had the audacity to make the case that this inflation is our chance to bring interest rates higher:

“The good news is that out of crisis springs opportunity: to fix a fundamental problem with the system. Interest rates have fallen close to their zero lower bound in part because societies have aged, creating a global glut of saving and a dearth of investment opportunities. These conditions determine the real (ie, inflation-adjusted) rate of interest in the long term, and are not going away. Yet for any given real rate, higher inflation raises the nominal rate that can be set by central banks. As a result, long before the pandemic, many economists were arguing in favour of a modest increase in the inflation target, to 3% or 4%, to get rates away from zero and build up monetary-policy firepower.”

Of course, these are just a few op-eds, but they give away a lot of what Wall Street is so fiercely lobbying the Fed for.

“In 2022 alone, over 120 groups reported lobbying the Fed… Postings on the Federal Reserve website in the past year record meetings with Discover Financial, Student Loan Servicing Alliance, National Bankers Association, Capital One, JPMorgan Chase, Morgan Stanley, and Goldman Sachs. (US banks saw their profits rise 7.8 percent in the second quarter of 2022 because of the rate hikes, though profits were still down year over year.)”

While Fed Chair Jerome Powell officially refuses the idea, the reality is that he doesn’t need all the fuss of announcing a new inflation target. The “flexible targeting” already gives Powell a right to keep inflation above the mandated target.

And if the historical pattern holds, these “flexible” “4%” targets are just the beginning.

While official inflation targets were only introduced in 2012, unofficially, the concept has been around for nearly 50 years.

When the dollar was pegged to gold, there wasn’t a need for inflation targeting.

But then Nixon broke the peg and began the fiat era.

Soon after, America went through its first inflation breakout: the Great Inflation of the ’70s.

A decade of untamable inflation urged lawmakers to put someone in charge of prices.

So they passed The Full Employment and Balanced Growth Act of 1978—which set “price stability” as one of the Fed’s key mandates.

Back then, this term had a very straightforward definition.

In the legislation, lawmakers explicitly defined stability as 0% inflation:

“Upon achievement of the 3 per centum goal . . . Each succeeding Economic Report shall have the goal of achieving by 1988 a rate of inflation of zero per centum.“

However, in 1994, unable to bring inflation to 0%, FOMC members across all Feds began tossing around the idea of targeting a 1.5% inflation instead.

“In the March 21, 2007, meeting, then-President of the San Francisco Fed Janet Yellen stated, “I remain comfortable with the goal that I enunciated some time ago—a long-run inflation objective of 1½% for the core PCE inflation rate.” Searching over the entire archive of publicly available historical transcripts of FOMC meetings, we track the explicit statements made by participants about their preferred inflation target.

The analysis shows that participants generally expressed a preference for an inflation target around 1½% from 2000 to at least 2007.”

Still, that target was more an unspoken guiding principle than an official rule.

After the post-2008 printing, for the first time, the Fed officially declared that they’d pursue inflation.

The target was pinned at 2% — that is, until Covid.

In other words, even if inflation rises above 2% for an undefined period, the Fed is no longer mandated to enforce policy to tame it.

If that’s the case, that 4% target Wall Street wants is not far off from reality.

In fact, the pattern is rather obvious.

At first, the goal was zero inflation.

This progression isn’t a coincidence.

As we discussed in “Inflation is a Lie,” because of the “base effect,” over time, the government has to debase more and more money:

“But if you compare today’s inflation to the ’70s, you’ll discover something mind-blowing.

In absolute terms, this inflation breakout has already surpassed the inflation of the entire 1970s: 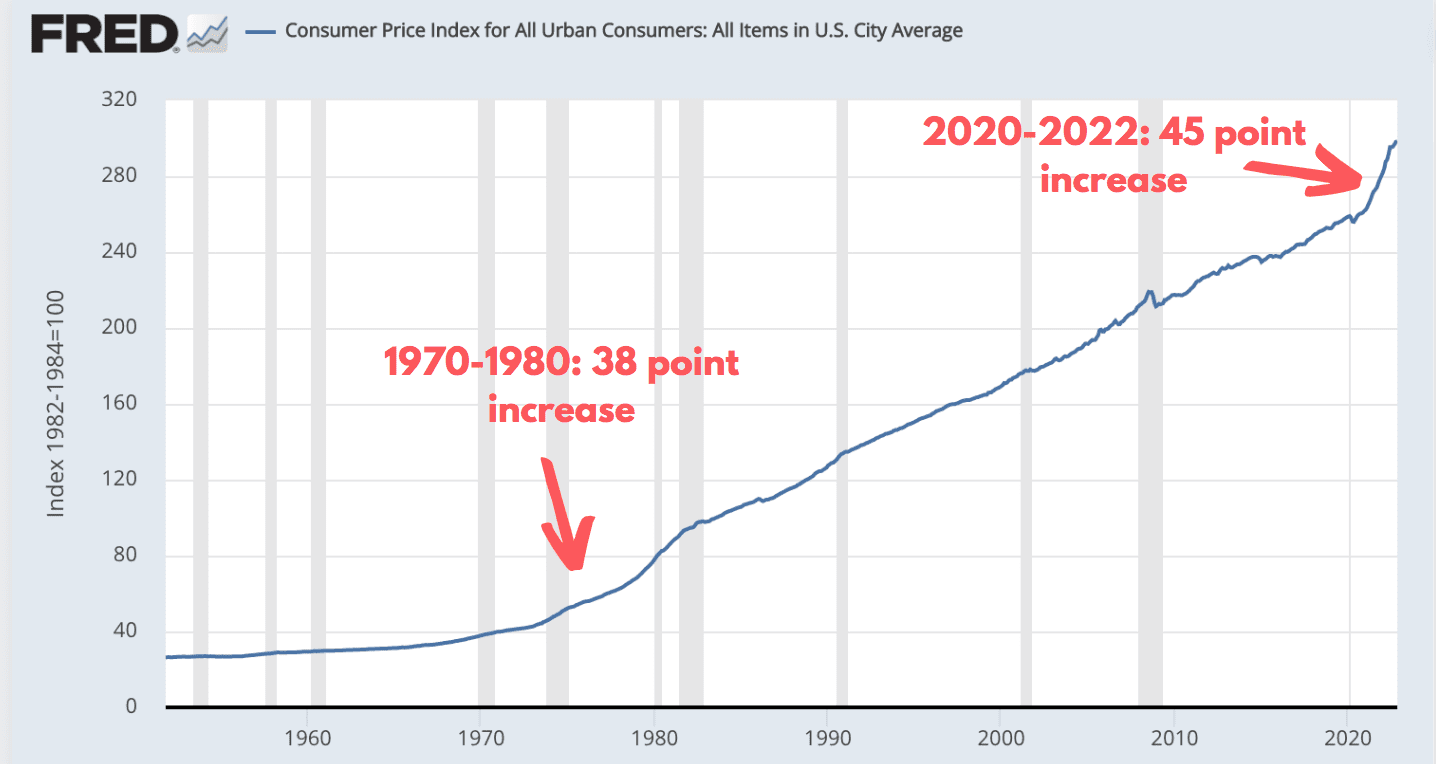 In other words, in the past two years, we have had to debase as much money as we did during the entire 1970s.

That’s why a minimum of 4% inflation is required to keep up with the money supply.

Keep this up, and soon you’ll have to normalize a 6% inflation target—or even 8%.

And while this sucks for citizens, higher inflation is actually in a government’s best interest – especially governments with reckless spending habits.

A government has four essential tools to pay down its debt: reduce spending, raise taxes, go bankrupt, or debase its currency via inflation.

We already know the last thing politicians want to do is reduce spending.

We already know that politicians who love to spend also love raising taxes – especially in countries where most voters pay little taxes or the tax increases are targeted at those perceived as “wealthy.”

Yup, Canada and the US come to mind.

However, raising taxes too much could discourage investment capital and lead to an economic downturn. This would decrease overall tax revenues, ultimately leading to an increase in the country’s debt as the government would need to borrow more money to avoid making spending cuts.

Then there’s bankruptcy. No country wants that.

That leaves one more tool: inflation.

But how does inflation reduce debt?

Instead of thinking of prices going up, think of the value of currency going down.

The same goes for government debt.

The higher the inflation rate, the less that debt is worth in the future.

They Can, You Can’t

The governments of all major nations are heavily in debt. That means they have no choice but to rely on inflation to reduce that debt burden.

“The evidence is that steady 4% inflation imposes very small additional costs compared to steady 2% inflation. Either way the economy adapts. . . . Perhaps the inflation target should be 3 or 4%?”

Now consider that when inflation targeting began in 2012, total US debt was around $15.5 trillion.

In other words, it only makes sense to double the targeted inflation rate from 2% to 4%.

Using the same 10-year outlook with a 4% inflation rate, the $31 trillion debt will be worth less than $21 trillion ten years from now.

This thinking is testimony to what a self-serving view of inflation Wall Street and its puppets on Capitol Hill hold.

They look at inflation as a mere function of one figure: GDP.

And in that context, they are right.

Once higher inflation becomes a norm and fear fades, there will be little difference between 2% inflation and 4% in terms of economic output.

Corporate America will simply pass rising costs on to the consumer, which will grow corporate earnings and, in turn, GDP.

For the economy, it’s a zero-sum game.

But the economy isn’t just a concept in textbooks. It’s real people living paycheck to paycheck and struggling to get by.

And these regular people will have to suffer through that 4% year after year.

It may seem like a mere couple of percentage points today, but in the long run, this inflation target will drive most average households into poverty.

For wealthy bankers and technocrats, though, higher inflation isn’t just a zero-sum game.

It’s their bread and butter.

The rich have assets such as stocks, real estate, or bonds – all of which appreciate with steady inflation.

What cripples purchasing power for the poor can be a money maker for the rich.

And that’s why the powers-that-be would rather mandate higher inflation than fix it.