“I think it’s — it’s probably a good time to retire that word….”

Later he added, “It now appears that factors pushing inflation upward will linger well into next year.”

What happened? Didn’t he say that inflation was simply due to a temporary supply hold-up not long ago? And inflation would let up as it did after 2008’s money printing?

If you’ve been following this Letter, you’d know exactly why and how Powell has been misleading you into believing that our current inflation is transitory.

And in a moment, I’ll show you why Covid’s stimulus is fundamentally different from 2008. More importantly, how it created a dangerous economic anomaly that’s driving prices up.

Spoiler: It’s much more than a supply bottleneck. And there’s a real risk the current 6% inflation is just the beginning.

We’ve touched on this long-held myth quite a few times lately. And at the risk of sounding like a broken record, I’m going to recap it yet again – because it’s essential to understand what has actually been driving prices higher in the past months.

Money printing itself doesn’t cause inflation. It’s where that money goes that affects prices.

For example, after the 2008 housing collapse, the Fed printed more than $3.5 trillion in five years.

(For perspective, that’s about only about 80% of how much it has printed during Covid, which amounts to one-third of all dollars in circulation before 2008.)

And yet, against all hyperinflation prophecies, we went through the lowest inflation period in history.

That’s because the printed dollars didn’t make it into the economy.

Instead, they got stowed away in bank reserves and capital markets. In the letter, “The Biggest Dealer in the World,” I wrote:

“The Fed doesn’t hand out printed money directly to people and small businesses. Instead, it uses that money to buy bonds from commercial banks through a creative term called open market operations.

This money goes to the banks as reserves, who can then lend it out at their discretion.

But after 2008, banks didn’t lend out most of those printed dollars. Instead, they hoarded it in their reserves as a cushion.

While this money printing hasn’t raised basic consumer prices, it has done something else – something much more important.

When the Fed buys government bonds by the trillions, it creates an artificially high demand for them. So their prices go up, and interest rates go down.

The idea is that cheap money urges companies to borrow more and reinvest in CAPEX and jobs; thus, trickling this money down to the rest of the economy.

After 2008, businesses borrowed a boatload of money for cheap. But instead of reinvesting most of it to CAPEX and new hires, they leveraged it to buy back their own stock – supporting and increasing their share price.”

In the end, printed dollars plumped up asset prices and led to the longest stock market rally in history (asset inflation) instead of raising consumer prices (CPI).

The Fed’s monetary policy can be broken down into three eras.

In the late 1980s, the Fed began fiddling with federal fund rates to keep tabs on the economy.

The mechanics were simple. When the economy trails off, the Fed lowers rates to make money cheaper to encourage borrowing, which, in turn, stimulates the economy.

Conversely, they raise rates to tame the bubble when the economy overheats.

Then in 2008, fine-tuning rates couldn’t cut it. So the Fed began “Monetary Policy 2,” which is MP1 + printing money to buy bonds from banks (aka QE).

Then, when Covid struck, policymakers again took stimulus up a notch.

Since the beginning of Covid, Congress handed out $4.84 trillion in the form of:

In other words, trillions of printed dollars were splashed all over the economy like gasoline onto a fizzled-out fire.

Ray Dalio, one of the most successful investors of our time, dubbed this “Monetary Policy 3” (MP3).

In the big picture, MP1 and MP2 put money into the banking system, which, as we discussed, wound up in Wall Street and in Big Corp.

Meanwhile, MP3 forced stimulus directly into the economy, which makes it very different than any past easing effort – especially when combined with MP1 and MP2.

The Biggest Supply and Demand Mismatch since the 1970s

In our letter, “The Inflation Strategy that Works 100% of the Time,” we discussed the extreme demand rotation during Covid that created a chain of supply bottlenecks in the economy:

“Covid has turned our entire lives upside down overnight. Behavior and spending patterns suddenly changed, which threw the economy off balance.

For example, who would have thought that city dwellers would be dying to move back to the burbs? No builder had that many houses for sale. So housing inventory dried up, and home prices soared.

People also started gobbling up gaming consoles, PCs, and other stuff to work and have fun at home. The onslaught of pandemic orders caught many businesses by surprise. And they quickly sold out.

This increased demand for electronics and computers led to a shortage of chips. Chip shortage led to disruptions in car manufacturing.

I could go on, but you get the point.”

The consensus view is that these supply bottlenecks are temporarily driving up inflation. And as soon as they peter out, inflation will pull back to healthy levels.

But a recent report from Ray Dalio’s Bridgewater Associates, one of the largest hedge funds in the world, hints there’s much more to the story.

Bridgewater argues that MP3 set off a demand boom without adding anything to supply. And now the demand is so high that supply can’t keep up even at full, pre-pandemic capacity.

“The mechanics of combined monetary and fiscal stimulus are inherently inflationary: MP3 creates demand without creating any supply.

The MP3 response we saw in response to the pandemic more than made up for the incomes lost to widespread shutdowns without making up for the supply that those incomes had been producing. This is very different than post-financial-crisis MP2, where QE, by and large, was not paired with significant fiscal stimulus but instead offset a credit contraction and, as a result, was not inflationary.

We’re now seeing the inflationary mechanics of MP3 play out and observing just how potent a tool it is. And while the composition of the demand it fueled will evolve (e.g., shift from goods back toward services as COVID recedes), demand is likely to remain highly elevated.”

Here’s a chart showing how U.S. supply has more than recovered. Meanwhile, demand is off the charts:

And even though supply is back above pre-pandemic levels, the gap between supply and demand is at its largest since the 1970s:

This is the very definition of what causes inflation: too much money (demand) chasing too few goods (supply).

And when you look around, the evidence is screaming in your face.

Need More Proof? How About a Job?

The world is short on everything from raw materials, such as lumber and gas, to capital goods like microchips. These shortfalls are holding up the supply of everything from gaming consoles to cars and houses.

(*Ivan here. I’ve personally been waiting over a year for a new F-150, which has now been pushed into 2022. I am also in the process of renovating my home, which has been delayed for over a year due to backordered parts, supplies, and labour shortages. Kitchen and bathroom supply manufacturers have completely stopped production of spare parts to focus on the demand from full sets. My orders for projectors are also on backorder. The list goes on. The word “backordered” will probably be one of the most used words on shopping sites this year.)

At one point, Burger King even scrapped meals with french fries from the menu because they ran out of potatoes!

Even if supply eventually catches up, there won’t be enough transport to get everything to where it needs to go. Ports are already filled with containers stacked to the sky.

Before Covid, it was unusual to see even a single cargo ship lurking outside the port just sitting there – they were always in motion. But, in September alone, a record 73 ships queued off Long Beach to offload at Los Angeles port.

And satellite imagery shows port congestion is rising by the month: 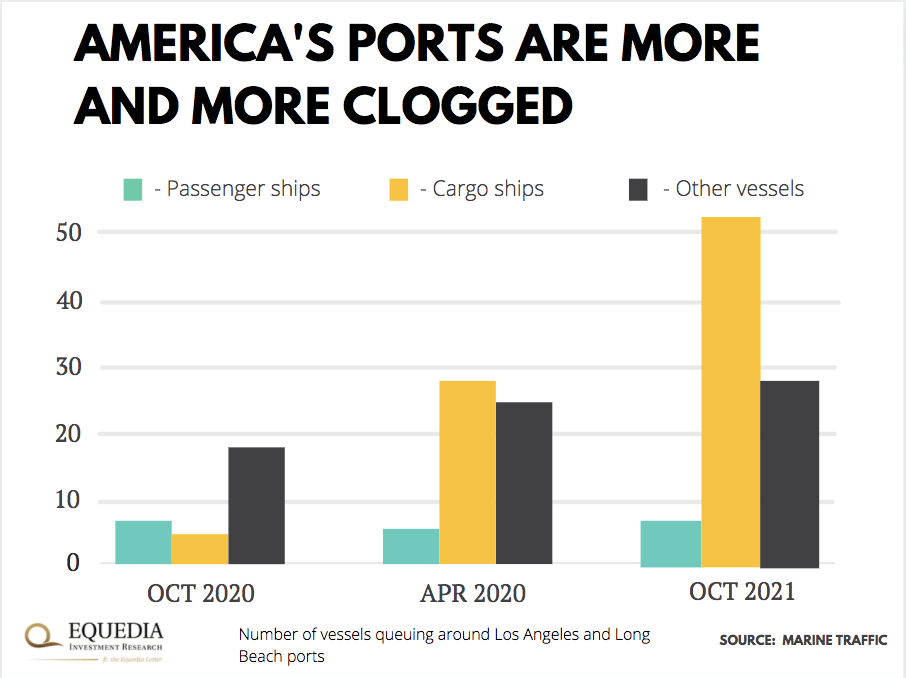 It isn’t only a shortage of supplies causing the massive mismatch in supply and demand.

There also isn’t enough workers to fill the void of creating the supplies.

Half of the businesses in the U.S. can’t fill their positions. And ones that do have a hard time keeping workers on board.

In fact, a record 4.4 million Americans quit their jobs in September.

According to Bridgewater’s data, we haven’t seen such a tight labor market in any economic boom since 1975. That’s one heck of a sign…

There’s a real risk that policymakers overshot – or it was planned to widen the gap between the rich and the poor.

Today’s inflation may not be the temporary by-product of supply disruptions they want you to believe; rather, it’s an early red flag the economy has been overflooded with cash.

Demand is so high that supply doesn’t just need to recover – it has to grow substantially above pre-pandemic levels.

This is why inflation might be higher and rage on longer than we’ve been told. And shrugging it off just because we got away with it last time is a big mistake.

I guess Ivan was right when he said in May, “Transitory My A$$.“ 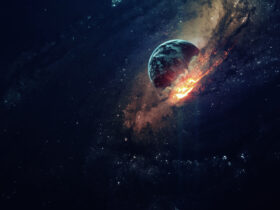 Stocks are down and the Fed has hinted at up to three rate hikes next year - Is the bubble finally popping?

This is by far the single most powerful drug in the world - And this dealer controls almost all of it.

The FED has a plan to withdraw its stimulus program. After that, a rise in rates is next. But just how fast or slow will the Fed raise rates?