The Great Reset isn't an event - it's a process that has been unfolding for many years. Here's where we are now in this process and what it means.

We have an inherent cognitive flaw.

As a species, we are quick to respond to instant changes. For example, if we touch a hot plate, we instantly know not to do it again.

However, if that change manifests over a longer time, we unconsciously adapt and become blind to it—for example, long exposure to the hot sun, which can lead to cancer over many years.

Kind of like the boiling frog that blithely swims in a pot of water as it comes to a boil.

In 2017, Equedia’s founder Ivan Lo predicted “the Great Reset” and broke down the sequence of events that would lead to it. Here’s a quick summary from his letter “These Six Events Will Determine Our Future“:

“…I want to paint our current picture to give you a bird’s eye view.

It plays out like this (with many of these points overlapping one another):

2. Deflate: Take the good feeling away by taking away cheap money through Quantitative Tightening (QT) and higher rates – decrease the money supply.

3. Control: Subdue the population by taking their focus away from the real situation. Think media control; think the increase of opioid usage and the legalization of marijuana; think President Trump; think billionaire-funded protests.

5. War: Mask the international financial and economic crisis through the rhetoric of war, or even war itself.

6. Reset: Global economic reset will be blamed on war; not the monetary actions of the powerful elite.”

Six years ago, much of the above would seem like a conspiracy. Today, we’ve seen every event happen, with number 6 slowly playing out.

This might give the impression that the Great Reset will play out as a major historic event. But in reality, it’s a well-disguised, multi-decade wealth transfer that will enslave you without you even realizing it.

Many think the Fed’s inflate-then-deflate policy is a zero-sum game that resets itself with each cycle, but it isn’t.

Take a look at this Bank of America chart showing the Fed’s cycles over the past 100 years: 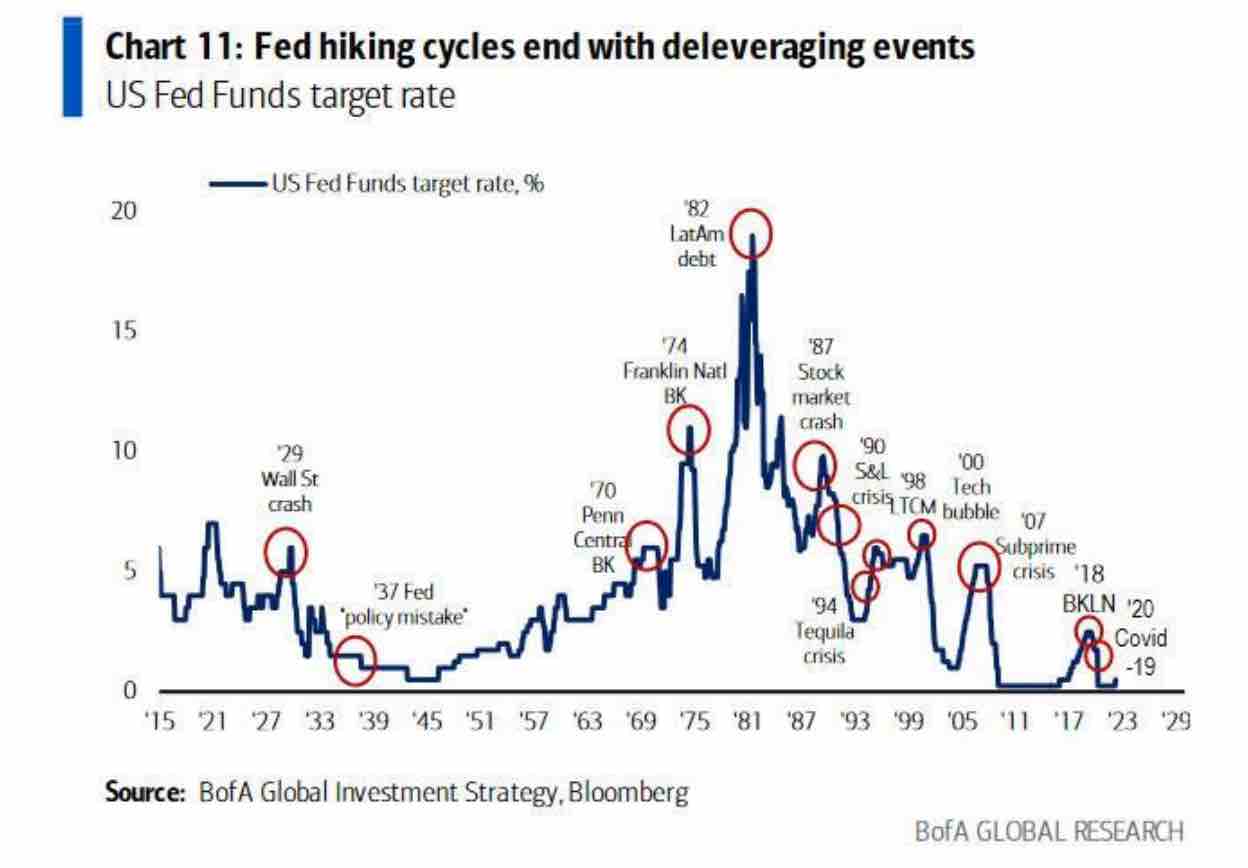 Note the pattern that began after Volcker’s ’80s tightening—the first deflating cycle after the dollar was de-pegged from gold and became a fiat currency.

Every deflating cycle was smaller than the one that preceded it. The Fed just couldn’t raise rates enough before the economy threw a tantrum and had to loosen up again.

Although policymakers present it as the riddle of the century and one of the greatest policy challenges, you don’t need a horde of PhDs in the Fed’s ivory tower to answer it.

In fact, there’s a very simple explanation for it: accumulated debt.

Each inflating/deflating cycle foisted more debt into the economy. For example, take a look at federal debt growth in the US: 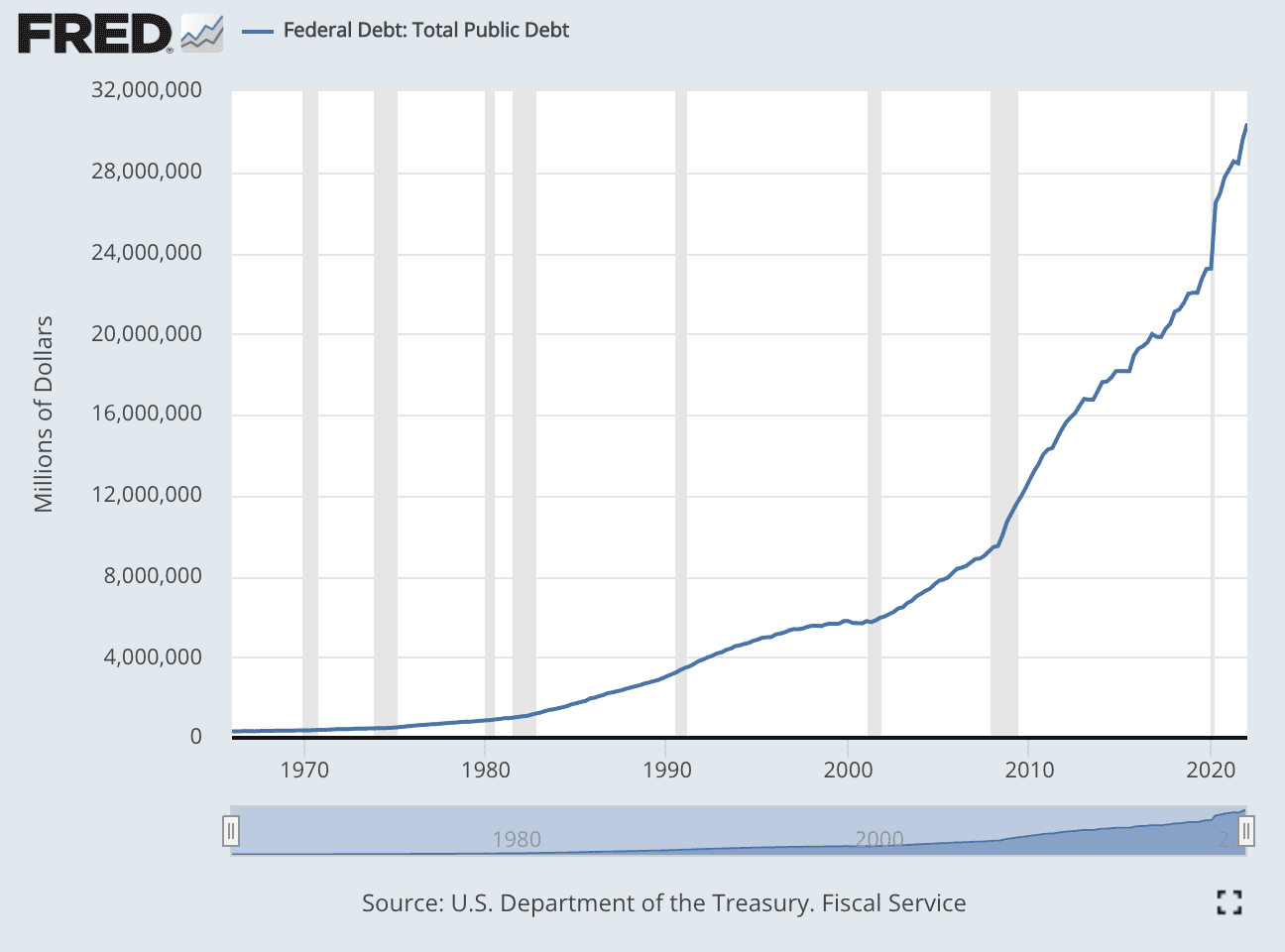 And as I revealed a few weeks back, this on-the-book debt is just the tip of the iceberg. From “The Great Debt Trap (Part 1)”:

“This hockey stick-shaped graph is just the official, on-the-books federal debt. It doesn’t include the lion’s share of other obligations—such as Medicare and Social Security.

In fact, the Treasury’s February fiscal report data revealed that, if you include benefits and entitlement programs, total federal obligations crest over $100 trillion. That’s 100,000,000,000,000!”

Private debt is off the charts, too:

“…A decade of the Fed’s near-free money led Americans to build up a record $15.6 trillion of debt. Despite that, the appetite for credit continues to blossom. Last year, consumers were taking out loans at the fastest rate since 2003.

Corporate America isn’t falling behind, either. In 2021, non-financial corporate debt hit a record $11 trillion, according to the Fed’s data. But, most worrisome, the biggest pile-on was recorded in the most “uncreditworthy” companies.”

This ever-growing pile of debt is a monetary feedback loop.

More debt makes the economy more sensitive to the cost of money. As a result, the Fed loosened policy and debased the currency, forcing even more debt into the economy.

And on goes the vicious cycle.

It took US Fed Chair Jerome Powell hiking rates to just over 1.5% to cut the value of many stocks in half!

Can you imagine how leveraged the economy is when it can’t operate at half the cost of money as it has in the past 100 years?

It’s clear that this combo of ever-growing debt and declining cost of money may give the economy a short-lived boost but is unsustainable in the long run.

At the policy level, more debt means the Fed has less wiggle room to raise rates because the economy is more reactive to debt servicing costs. In turn, the Fed keeps buying assets, driving rates lower—even when the economy is strong.

Such has been the case over the last decade.

In order for the Fed to keep rates artificially low, it has to buy bonds from the Treasury as part of quantitative easing (QE).

In fact, the Fed has bought so many Treasuries that it’s the second-biggest lender to America – second only to America itself. 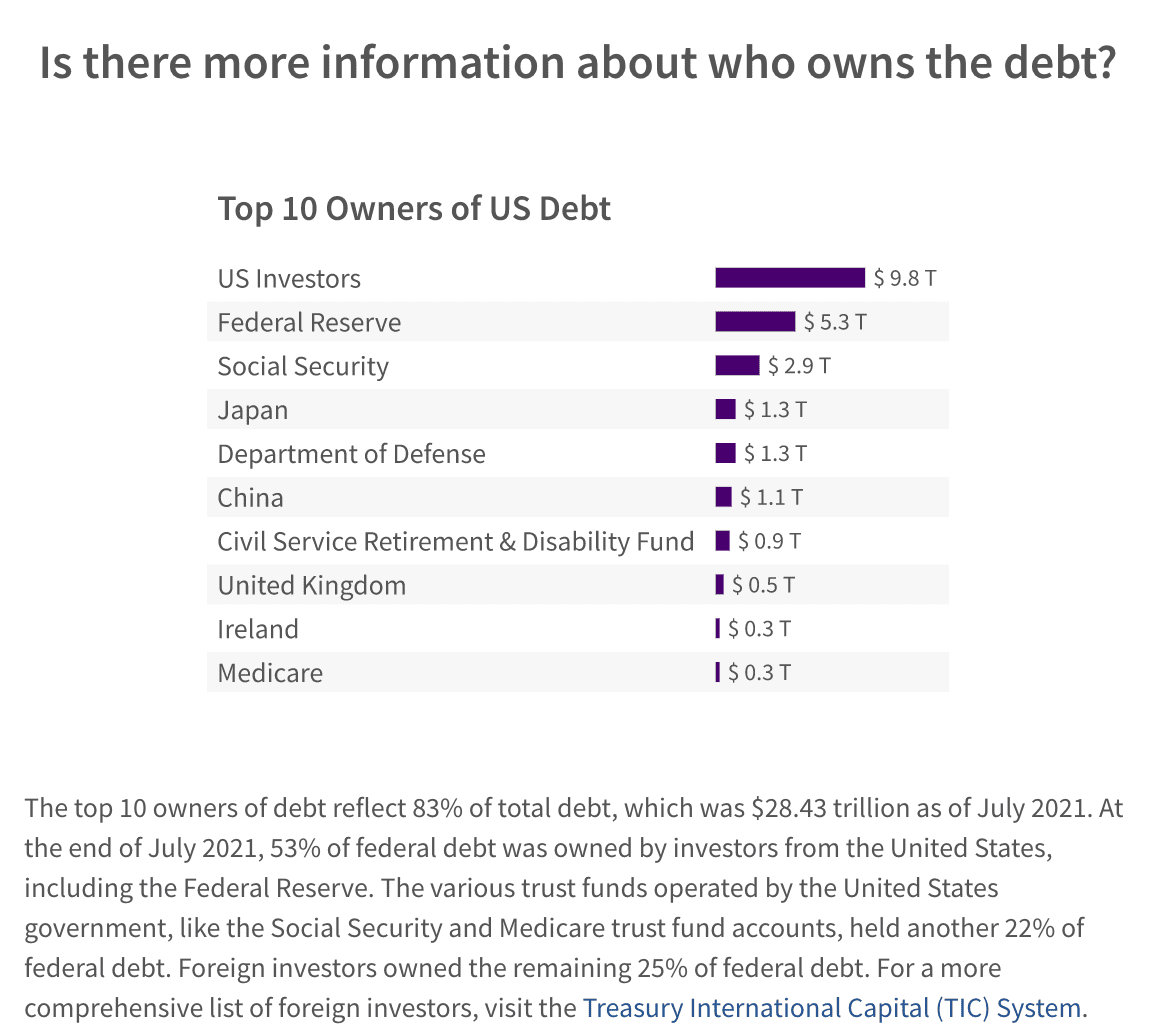 Congress, of course, could use that money to curb deficit spending and pay off federal debt. Yet, it uses it to finance its elite-favoring agenda while drowning the nation in more debt.

At the economic level, the Fed’s loose policy forces people and businesses to go into debt, too—whether they like it or not. I wrote about this surprisingly little-discussed phenomenon in my letter “The Great Debt Trap (Part 1)“:

“Say you run a small coffee shop on a busy street bustling with a dozen cafes competing for your customers. Then one day, the Fed slams down the rates, and your barista competitors seize the chance to take out cheap business loans.

They use that money to spruce up storefronts, buy fancy Italian coffee machines, or refurnish their venues to create a more inviting atmosphere—all to lure in more customers. Including yours.

How do you stay competitive?

You do the same thing as them: borrow.

Even if you were doing just fine without debt, now that your competition is leveraging cheap money, so must you—or else you’ll fall behind. It’s a rat race of debt.

The same goes for people in general.

During Covid, Americans fell over themselves to buy homes in fierce bidding wars. And it wasn’t just about cheaper mortgages – many wanted to lock in the deal before cheap money jacked up housing prices even more.

Can you blame them for taking on debt out of fear of getting priced out of homeownership—like tens of millions of Americans who already have?

In other words, cheap money is forced conformity to debt.”

So what happens when the nation collectively has more debt? Costs rise and it becomes less productive.

Look at how America’s real GDP growth had been persistently slumping from 1980 until Covid (Covid skews the picture because trillions of dollars were shoved into the economy over a short time): 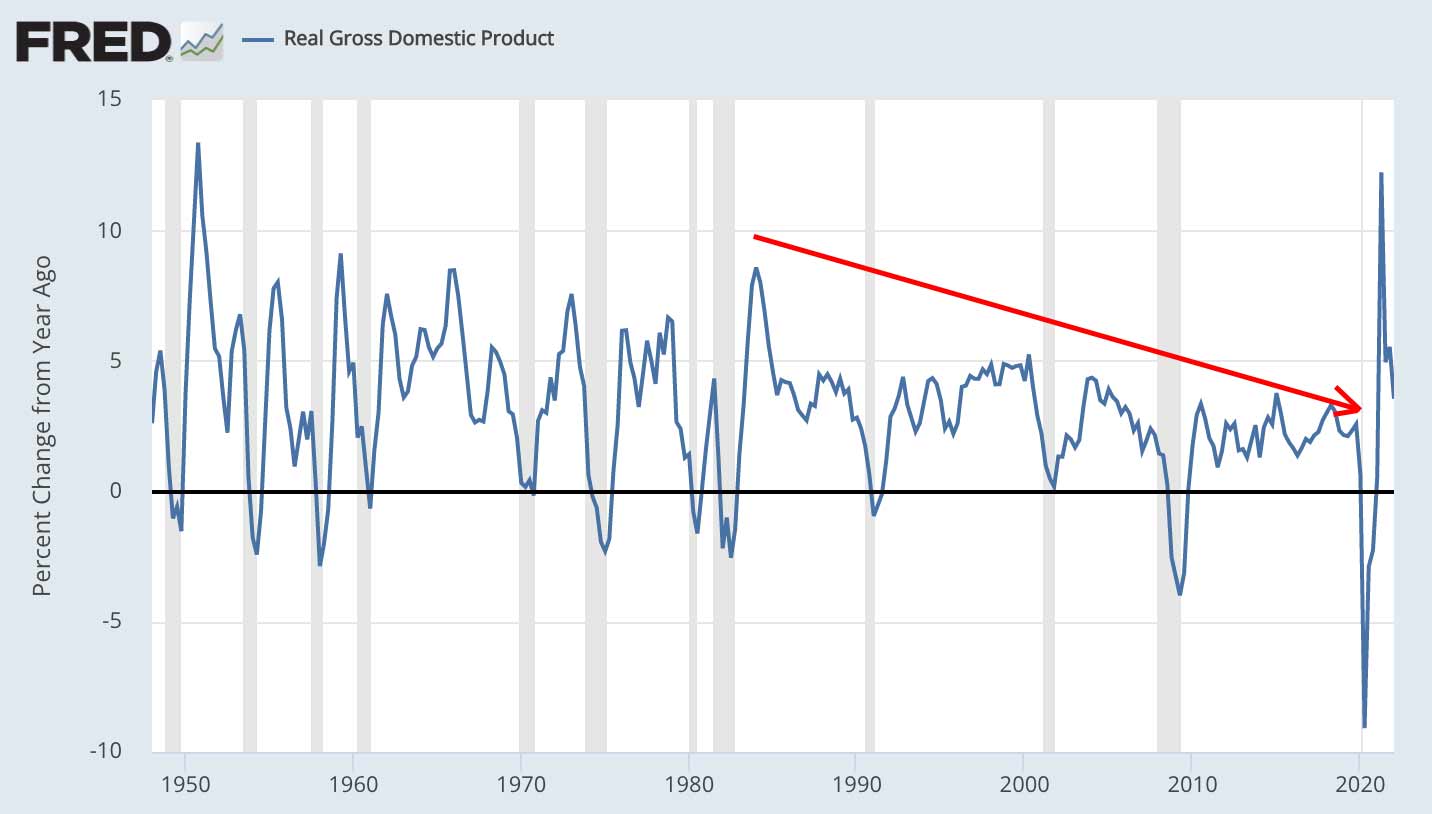 So we’ve got a deteriorating economy that keeps piling on debt, and we’ve been trimming the cost of money to postpone paying the piper.

How is it in anyone’s interest to hold this feedback loop as the status quo? Aren’t the elite sabotaging themselves by destroying the very “soil” that feeds them? Unfortunately not.

Have you heard of the saying “privatizing gains, socializing losses”? It refers to the policy that treats company profits as the sole property of shareholders and its losses as a national responsibility.

Let me give you an example.

In the last decade, America’s 500 biggest companies plowed $22.5 trillion of their earnings into buybacks. Instead of expanding business or just saving up for a rainy day, they spent that money to artificially prop up their stocks.

In fact, corporate America snapped up so many of their own shares that they even out-invested Wall Street. As I wrote in “The Biggest Dealer in the World“:

The Fed made money so cheap and the economy so indebted and weak that corporations saw no point in investing back in business. The economy wasn’t growing fast enough to justify the expansion.

The rich aren’t too concerned about it.

Buybacks handsomely reward the biggest shareholders and top executives who earn most of their fortunes through capital gains – which is precisely why Ivan said, despite all the doom and gloom after 2008, to stay invested in the stock market.

But what happens when things hit the fan, and these buyback-infused companies stumble? The Fed steps in and bails them out by lending them billions of printed dollars.

A good example is Covid and airlines.

“The United States’ five largest airlines – which are pushing for a $50bn-plus bailout to help them survive the Covid-19 crisis – have handed out more than $45bn to shareholders and executives over the last five years, research by the Guardian has found.

Delta, American Airlines, United, Southwest, and Alaska have spent $44.9bn on share repurchases and dividends in the last five years, according to Guardian research. In addition, nearly $750m has been paid out to executives over the same time period.

According to separate data compiled by Bloomberg, these five airlines have spent 96% of their free cashflow on buying back their own shares over the last decade.”

Why bail out companies that budget their money for capital distribution schemes?

No wonder the elite aren’t pushing for policy change.

Why would they care about long-term consequences that will be “socialized” when they can exclusively “privatize” short-term gains?

I can give you many more examples. But the most irrefutable proof is in inequality, which is growing in line with the Fed’s increasingly loose policy.

Not only did the bottom 50% see no real net worth grow or any increase in their real income, but most of them have been priced out of homeownership.

Worse, they’ll now have to collectively fund this ever-growing pile of debt with their quickly depreciating money.

This is the Great Reset unfolding before our very eyes.

It’s a systematic wealth transfer that’s quietly sucking the money from the bottom classes through debt and faux capital distribution schemes—like the ones I just showed.

And it’s damn effective because GDP growth won’t bring people to the streets.

The “boiling point” is somewhere over the horizon, but I don’t believe we’re there yet. The Elite has many more creative ways to impose more debt on the nation while “privatizing” the short-lived gains that come with it.

There’s no better way to summarize this letter than these two lines from Ernest Hemingway’s novel The Sun Also Rises:

“How did you go bankrupt?”

Read THIS before you invest in real estate: A look at the numbers that matter to determine if a real estate collapse is coming.