Last month, China revealed its authoritarian regime in full color. In pursuit of its “covid zero” policy, it put its second-biggest city, Shanghai, in total lockdown. For a month now, 25 million people have been locked up with limited food, medicine, and other supplies. 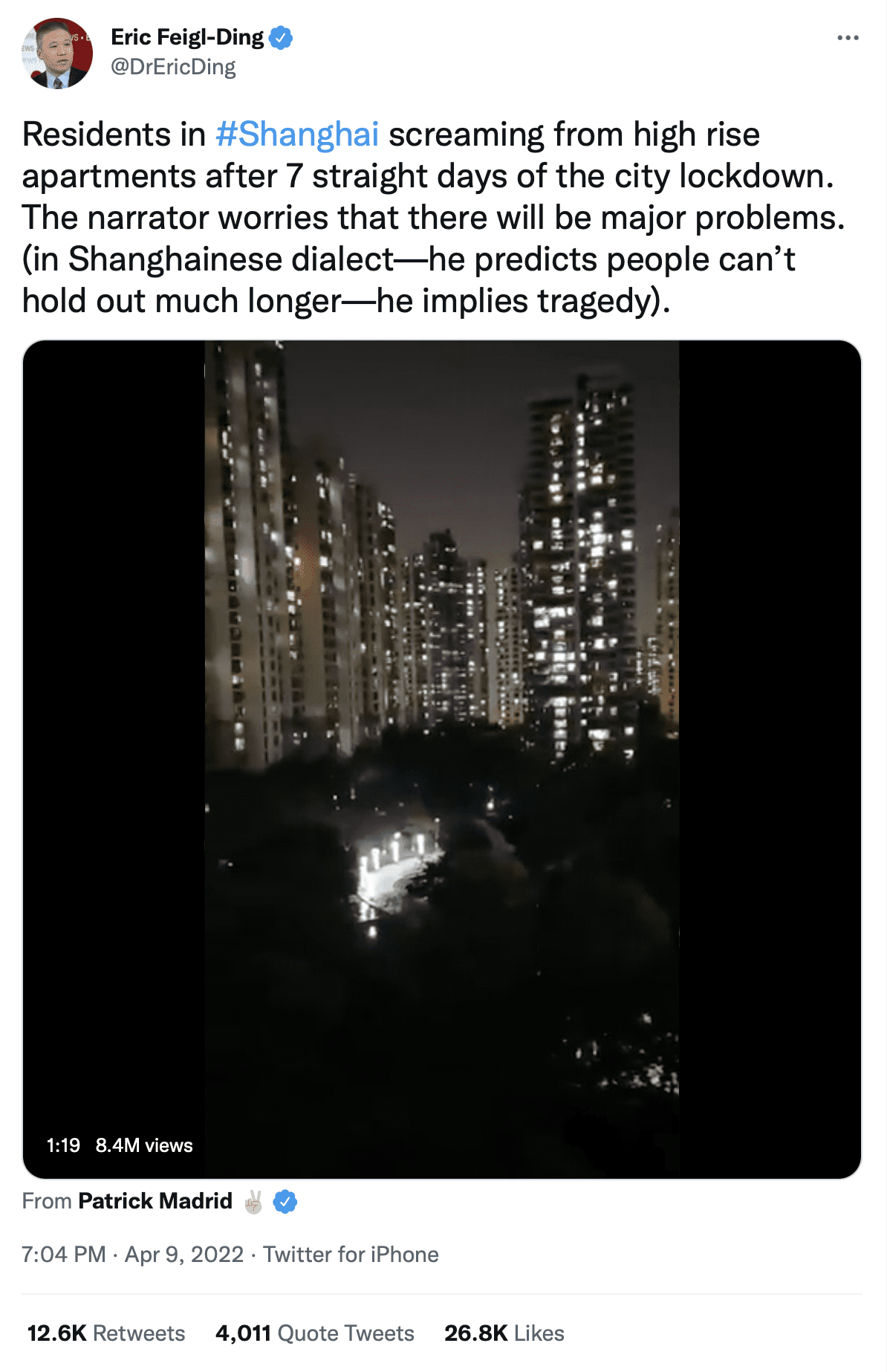 Like sci-fi cops, drones and robot dogs equipped with facial recognition tech are zipping around the city. They are ordering residents to “control the soul’s desire for freedom” and comply with lockdown rules.

Those who don’t obey are evicted to” quarantine centers.” They lose their social credit scores. And, according to a taken-down popular Twitter account, some are “fined directly from digital CBDCs [central bank digital currency] wallets.”

Shanghai is a real-world example of Big Brother.

It shows the unthinkable control the state can exert by quietly centralizing enforcement. And, how little by little, it can take away everything from you: from money to basic human rights.

Most important, they do it slowly, so you don’t bat an eye until it’s too late. And if you think it’s just China, think again. Just take a look at Quebec not long ago, when they tried to ban people from walking their dogs passed 10pm!

The COVID lockdowns you’ve experienced are just the beginning – a small “test,” if you will. Ivan has been telling you about this for years – only to be called a conspiracy theorist by many.
But if you think the lockdowns in China are scary, just you wait.
We’ve talked about the Great Reset, but this is only the beginning.
If you didn’t believe Ivan before, you better start…

Have you noticed the sudden hurry of central bankers to explore CBDCs? Could a CBDC USA be coming?

Shortly after China’s e-yuan launch, the Fed went to MIT to develop its own digital currency. They call it “Project Hamilton” (which is funny, and I’ll tell you why later).

Then Biden signed an executive order urging the nation to prepare for a digital dollar rollout in case it’s “deemed in the national security interest.”

“The development of our currency to its current form has been a dynamic process that took place over centuries. Today, monetary sovereignty and uniform currency have brought clear benefits for economic growth and stability. Our approach to digital assets must be guided by the appreciation of those benefits…Some have suggested a CBDC could be the next evolution in our currency.”

Remember, Ivan called this many, many years ago.

Via “Is Bitcoin the New Stimulus?“:

“…there could be a reason why governments around the world are letting cryptocurrencies run rampant:

So don’t think CBDCs are just a power play between China and America.

In March, MIT reached similar agreements with the Bank of Canada and the Bank of England.

A recent report by the Bank of International Settlements (BIS) showed that nearly all central banks are building their own CBDCs:

“Nine out of 10 central banks are exploring central bank digital currencies (CBDCs), and more than half are now developing them or running concrete experiments… Globally, more than two thirds of central banks consider that they are likely to or might possibly issue a retail CBDC in either the short or medium term.”

Let that sink in for a moment.

A CBDC is no longer a far-fetched idea in some “future of money” TV segment. Lawmakers are explicitly hinting at the looming change in global monetary order; we are shifting away from fiat currencies to state-issued digital currencies.

And this marks the final step in the complete centralization of money that started in 1913.

From “National Bank Notes” to a Digital Dollar

With each monetary revolution, the state has gained more and more power.

Before 1913, money in America was issued by thousands of banks in the form of “national banknotes.” Then the Fed came along, introduced the unified currency, and monopolized its creation.

Still, its hands were mostly tied because Fed notes were backed by a real asset—gold.

Then Nixon took the dollar off the gold standard, and the dollar became a fiat currency. Because fiat notes didn’t need any collateral, the Fed could print them at will.

And we already know how it used that to its advantage.

Even so, the fiat system didn’t give the government absolute monetary control. That’s because the Fed can’t distribute and control fiat dollars outside bank reserves.

As I wrote in “The Biggest Dealer in the World”:

“The Fed doesn’t create most of the dollars that circulate in the economy. It’s the private sector—commercial banks—that do. They use monetary engineering called fractional reserve banking…

Central banks play an important role in this chain. They keep tabs on commercial banks, hold their reserve cash, and inject money when liquidity dries up. But it is commercial banks that multiply the dollars and shove them into the economy…”

So, while the Fed can print up as many dollars as it wants, it is at the mercy of private banks, wh0 may choose to keep the money to themselves*. Just as they did after the Great Recession.

*of course, these private banks are still governed by the rules set by the Fed.

But this is where the digital dollar comes in.

Policymakers often spin a digital dollar as a safer, state-backed alternative to cryptocurrencies. Yet, apart from the digital “wrapper,” it’s nothing like a cryptocurrency.

It’s a digital currency governed by an open-source software called a blockchain. It’s a distributed ledger system that has hard-coded rules in it that are enforced by millions of miners instead of one central authority.

Most important, anyone can change those rules – even you – as long as there’s a majority approval.

For example, Bitcoin had a number of changes to its blockchain (aka forks) when the majority voted in favor. They added new features and fixed Bitcoin’s weak points that surfaced after its wider adoption.

In theory, people could debase Bitcoin like the dollar by removing its core feature: the hard cap of coins available. But that didn’t happen because it’s not in the interest of Bitcoin holders to devalue their asset.

No politician or elite hiding behind lobbyists can influence it because it’s literally those who hold the money that makes the decisions. And if there’s change, it actually represents what the majority wants.

Meanwhile, a CBDC is 100% controlled by the issuing authority, in this case, the central bank. So the issuing bank can mint as many tokens as it wants and do whatever it wants with them with no oversight.

“Despite using ideas from blockchain technology, we found that a distributed ledger operating under the jurisdiction of different actors was not needed to achieve our goals. Specifically, a distributed ledger does not match the trust assumptions in Project Hamilton’s approach.”

And the worst thing is, the digital dollar could be programmable. That means the Fed can introduce rules that regulate money in circulation and change them at its discretion in real-time.

Even worse, think Trudeau deleting all of their life savings…

If you follow cryptocurrencies, you’ve most certainly heard of Ethereum’s “smart contracts.”

In the simplest terms, they are “clauses” programmed directly into tokens that trigger an action when certain conditions are met. For example, it can deduct money from your wallet when it comes time to pay interest on your loan.

The difference between legal agreements and smart contracts on a blockchain is that smart contracts are self-enforcing. So you don’t need a bank, a court, or any other third party to enforce those rules.

What makes this system democratic is that these contracts are transparent and immutable by default. And their fulfillment is backed by a decentralized blockchain governed by millions of people.

Policymakers are actively tossing around the idea of making CBDCs programmable, just like Ethereum.

“Tom Mutton, a director at the Bank of England, said during a conference on Monday that programming could become a key feature of any future central bank digital currency, in which the money would be programmed to be released only when something happened…

A digital currency could make payments faster, cheaper and safer, but also opens up new technological possibilities, including programming: effectively allowing a party in a transaction, such as the state or an employer, to control how the money is spent by the recipient.”

And they often compare it to Ethereum’s smart contracts, as if that’s some kind of validation:

“Earlier this month, Sir Jon Cunliffe, a deputy Governor at the Bank (of England), said digital currencies could be programmed for commercial or social purposes, even down to the way children spend pocket money.

He told Australia’s Sky News: “You could think of smart contracts in which the money would be programmed to be released only if something happened.”

But when smart contracts are built into a centralized system, they are no longer immutable. The powers that be can simply override the rules at any moment.

For example, the government can suddenly deduct a “tax” from your savings to fight climate change.

Or punish the unvaccinated with “health insurance surcharges.”

Or even straight up freeze digital wallets to censor opinions…

In other words, the programmable digital dollar is the ultimate enforcement system. And if, God forbid, it becomes the only legal tender, it would mark the end of any financial freedom there is left.

I’m going to end this letter with a chilling historical connection.

Call it a conspiracy, or coincidence, but the Fed’s digital dollar project is named after Alexander Hamilton—America’s first Treasury Secretary who served during George Washington’s presidency.

He was a diehard autocrat who believed that ​​inequality was “the great and fundamental distinction in society.”

And that order in society, in effect, hinges on the elite.

As such, his policy aimed to tie the federal agenda to the interests of wealthy Americans.

And, surprise, surprise, he was the first to toss around the concept of a centralized banking system.

The Fed doesn’t often show its creative side, but damn, what a catchy name for the most autocratic enforcement system in America’s history.

Hamilton must be smirking in his grave.

I strongly urge you to forward this Letter to as many people as possible. Otherwise, CBDCs WILL happen.

Choose your leader accordingly, or you may soon have no choice.