The Dow fell 1000 points in one day, but Wall Street is still making money. Here's how they do it.

At Berkshire Hathaway’s annual meeting, he called out bankers for stoking market speculation and turning corporate America into “poker chips.”

Then, his right-hand man Munger chipped in:

“We have people who know nothing about stocks being advised by stockbrokers who know even less… It’s an incredible, crazy situation. I don’t think any wise country would want this outcome. Why would you want your country’s stock to trade on a casino?”

While I don’t agree with everything these guys say, they hit the nail on the head this time.

Wall Street is effectively a croupier that distributes bets. It doesn’t care whether they are good or bad bets because the house always comes out as the winner. So, the more bets, the bigger take.

It’s no wonder Ivan said the banks were pouring money into retail investors and snapping up trading platforms in his letter,”Rise of the Retail Investor,” back in October 2020.

But many people don’t realize this.

That’s because Hollywood has fed us a very different image of Wall Street. Not only is it grossly over-romanticized, but it never shows the investors’ losses – only the wins of Wall Street.

And that’s our topic for today.

What is “Wall Street”?

“Wall Street” is such a general term that many slap it on any institution that handles bigger flows of trades. But there are actually two sides of Wall Street doing polar-opposite jobs.

There’s the buy-side and the sell-side.

The buy-side buys stuff. Asset managers like pension funds, mutual funds, or hedge funds pool investors’ money and invest it in stocks, bonds, and other securities on their behalf.

The sell-side, well, sells stuff. They are the “sales agents” of public companies—aka investment bankers—who auction off their stocks, bonds, and other securities to the buy-side.

So, Wall Street, the likes of JPMorgan that are quoted all over the media, are mostly the sell-side. Like all Wolf of Wall Street-like blockbusters, they don’t earn those $500,000 bonuses by flipping stocks.

Instead, they broker corporate America.

Catching the Crumbs off the Table of Capitalism

So, how exactly do investment bankers make money?

First, as I’ve just touched on, they help companies raise money by selling their securities to asset managers. For example, every company hires an investment banker to underwrite its IPO or issue a new batch of bonds.

In return, these banks earn fat commissions and advisor fees.

Do you know how many times I’ve heard investment bankers tell me they could care less about the companies they sell because their commission check is always there? One too many.

The second big source of revenue is trading.

But again, unlike many fantasize Wall Street fantasies, these bankers don’t trade for profit. Instead, they act as a “private broker” for the buy-side (in financial lingo: the over-the-counter market).

For example, how does an asset manager sell $10 million of Apple bonds when there’s no easily accessible liquid public exchange for bonds? They call up a trader at, say, JPMorgan, who hooks them with another asset manager whose willing to buy Apple bonds.

(If there’re not enough buyers, these traders buy those bonds themselves, hedge them with derivatives to avoid market risk, and hold them on their books until they come up.)

Then, just like your broker, they earn the spread. Only bigger.

In other words, Wall Street is market agnostic. It makes money no matter whether the market is up or down.

As Buffet poetically put it: “Wall Street makes money, one way or another, catching the crumbs that fall off the table of capitalism.”

The caveat is that they have to catch those crumbs.

You may think that a great track record is how Wall Street lands their clients, but there is much more to it than that.

Wall Street has a rep for lavish outings and gifts to lure in clientele.

To give you a taste, during its last crackdown, the SEC found out that mid-sized investment bank Jefferies budgeted over $1.5 million a year for its vice president’s “entertainment” expenses.

“He used the money to court five Fidelity traders, paying for private flights to Turks and Caicos, Bermuda, and Puerto Rico, as well as vintage wines, golf outings, and trips to Wimbledon and the US Open tennis tournament. He also paid $75,000 towards a lavish Miami bachelor party for a Fidelity trader. “Investors deserve, and the integrity of the market requires that traders select brokers based on the quality of their trade execution and not the lavishness of their gifts,” said Walter Ricciardi, the SEC’s deputy enforcement director.”

That must have been fun. But no fancy party or lift on a private jet can beat the dearest favor a Wall Street banker can make for his clients: giving them access to insider scoops.

As middlemen, Wall Street bankers rub elbows with both public companies and asset managers who invest with them. And that gives them the power to hook them up in enlightening gatherings.

Of course, there are laws.

Executives can’t (explicitly) disclose market-sensitive information. But there are a lot of gray areas here, i.e., there’s no law that says you can’t discuss “hypothetical” ideas.

Besides, those people excel at picking up soft information, such as tones, body language, and other clues—all of which can help them foresee events that affect stock prices.

The result is that corporate access has become a booming back channel of insider information. There’s even an academic study that proves asset managers who meet with execs tend to outperform those who don’t. While we agree this should be a part of due diligence, how many retail investors actually get the chance to speak with the execs of large cap stocks?

In other words, Wall Street always knows where the “crumbs” are because they’re told where it is.

Here’s how it works.

Analysts from sell-side banks keep an eye on certain stocks. And each quarter, they grade them with one of the three ratings—buy, sell, or hold—along with a price target.

These grades draw a lot of eyeballs. Half the CNBC coverage is basically what Wall Street “buys” and “sells,” There are even subscription services that supposedly help you cash in on their ratings.

The thing is, investing based on them is like asking a car salesman if you should buy a car.

That’s because the people who rate stocks don’t earn a living off the accuracy of their calls (empirical evidence). Instead, most of their money comes from bringing in “the flow”—investment banking clients.

It’s why, for example, sell-side analysts aren’t allowed to talk to brokers. This ethics barrier is known as the “Chinese Wall.”
But, as we’ve just learned, the best way to land clients is to put them in touch with executives…

…which presents a moral dilemma.

On the one hand, your designation binds you to put out objective stock ratings. On the other, your paycheck depends on sucking up to executives—the people behind the stocks you’re rating.

This is why Wall Street largely glosses up ratings out of fear of losing corporate access:

“There’s a tendency to be a little more timid about bad news… If you stick your neck out and break bad news, you get a backlash from owners of the stock,” Tobias Levkovich, chief U.S. equity strategist for Citigroup told CBS News.

In other words, that’s a massive conflict of interest that looks like this: 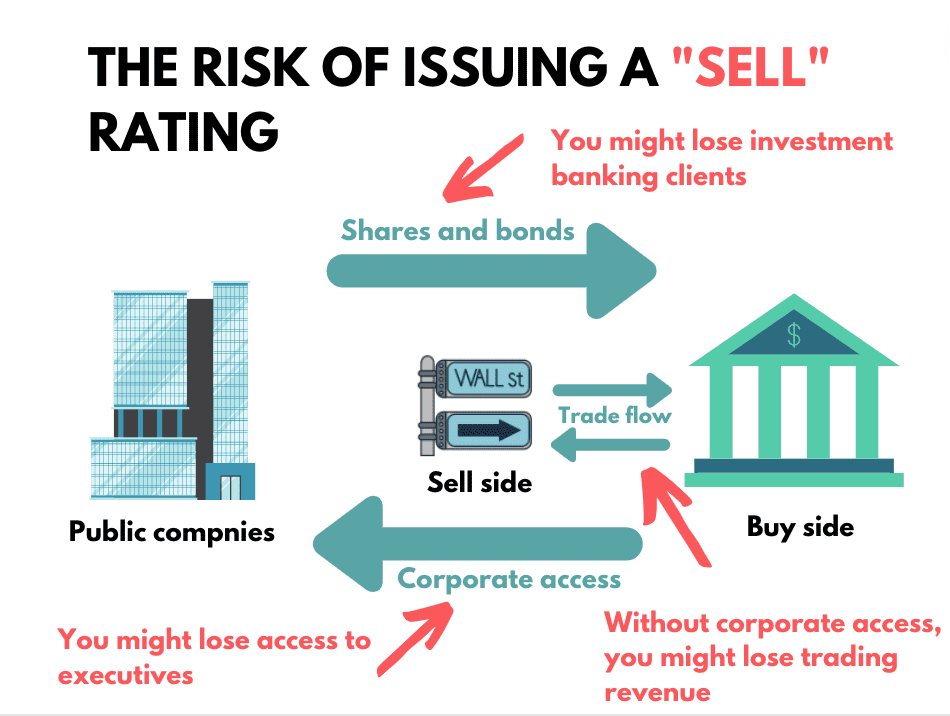 The ratio of buy/sell/hold ratings barely budges, even in market crashes: 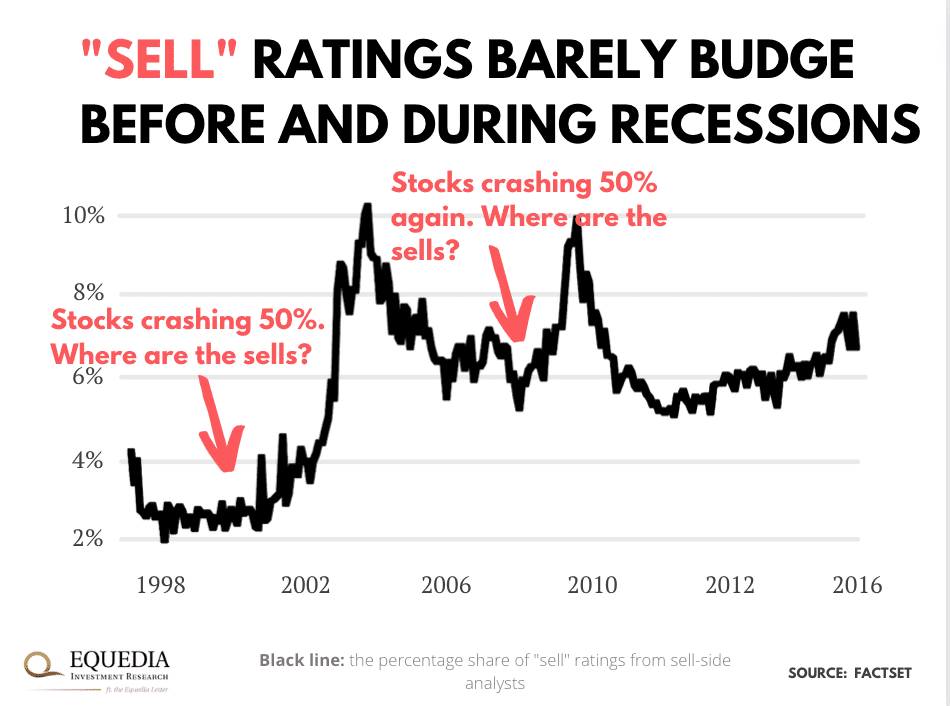 That’s why “buy” ratings, on average, underperform the market.

That’s why Wall Street’s earnings estimates overshoot most of the time.

But there is one thing they do consistently: failing to predict a single recession on record.

As I wrote in “The Fallacy of New Year Predictions”:

“It’s funny how financial experts like to bang on the “economy is cyclical” drum. Yet when they predict the markets, they always extrapolate as if the economy moves in one perpetual direction. 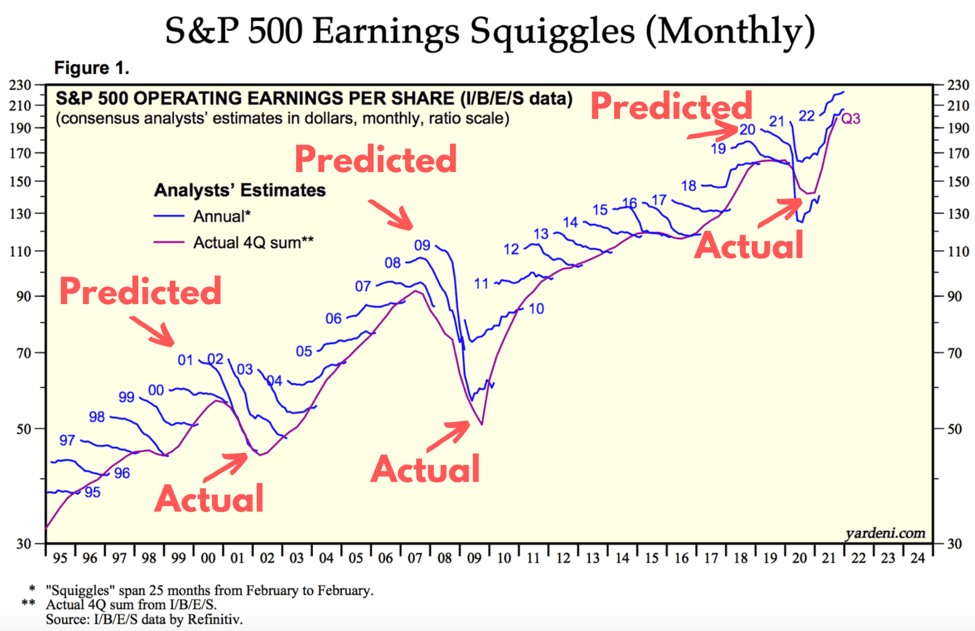 If you traded based on these extrapolations, you’d have lost your shirt in every recession.”

Keep this in mind when you tune in to CNBC next time.

Those Wall Street suits… they often make these big, bold—and often reassuring— predictions. Yet, they have no skin in this game. Nor are they risking their rep for making a bad call.

And as long as the money is tricklin’ in, they win one way or another.