A Golden Opportunity for Patient Investors

On rare occasions, sometimes things just come together in such a way that they fit perfectly. This is the case when Evrim Resources Corp. (TSX-V: EVM) and Renaissance Gold Inc. (TSX-V: REN; OTCQXB: RNSGF) announced that they were combining in a merger-of-equals transaction to form a new gold royalty company to be known as Orogen Royalties Inc.

We have watched several merged entities do very well in the marketplace upon completion of their business combinations. Examples are the merger-of-equals of Alio Gold and Argonaut Gold; Balmoral Resources and Wallbridge Mining, and SSR Mining and Alacer Gold.

The “merger-of-equals” method of business combination began in late 2018 when Barrick Gold and Randgold announced their intention to merge on a zero premium basis.

Since that time, there have been many other examples, as noted above.

The point is that gold royalty companies are like the old video game of “Pac-Man,” busily scurrying about devouring the entire landscape of both the large and small opportunities left in the global gold property sector.

Most gold royalty companies simply source a royalty interest, then purchase it for cash.

Evrim and Renaissance Gold have chosen a different path to their success in becoming a gold royalty company. They were able to organically generate their own royalties because both companies started out as prospect generators.

Ely Gold follows a similar strategy. We featured Ely Gold in our Educational Segment 004 entitled: The Italian Farmer and the Invisible Rain Cloud.

Traders Adage: A Perfect Example of a Three Taps and Out Chart

Although we did not time a buy recommendation for Ely Gold upon the break out of the long ascending triangle technical chart pattern that was used to illustrate the traders’ adage of “three taps and out,” it was clear from the trading activity reflected in the chart that investors could see a bright future.

We first brought EVM to the attention of our readers in May when the stock chart seemed to indicate that something positive might be happening behind the scenes.

Our observations about EVM turned out to be prophetic:

“There is great competition for mine royalty companies to aggregate royalties in their respective portfolios. Evrim’s 2% NSR would be a valuable addition to a number of small to mid-sized royalty companies.”

We can certainly see the technical comparison between ELY and EVM – two stocks that have a very long defined period of price consolidation.

Let’s dig a little deeper and take a closer look at the EVM and REN combination.

Evrim’s President & CEO Paddy Nicol stated, “The combination of Evrim and Renaissance to form Orogen Royalties Inc. is an important and exciting milestone on the path towards creating an enlarged royalty portfolio with exceptional capability to generate additional royalties through organic prospect generation and joint venture partnerships. The future revenue we expect to receive from our royalty portfolio will fund acquisitions and exploration and enable us to maintain tight control over our capital structure. Furthermore, we are delighted to join in Renaissance’s exploration efforts in Nevada. The Reno-based technical group is very experienced and highly capable at generating projects in one of the premier gold districts in the world.”

The timing of the EVM/REN combination fits well with the timing of a near term break out move of gold itself. Gold is trading right on its break-out level of around $1800 per ounce.

Currently, the organically generated royalty portfolio of the combined entity consists of these royalty assets:

The near term cash flow from Ermantino West, the long term growth potential from the Silicon Royalty, and the proforma cash of $13.5 million ensure that this well-seasoned exploration group will continue building value for Orogen Royalties.

The “big prize” is the Silicon Royalty. AngloGold Ashanti is the third-largest global gold producer. It does not target small deposits. Further development of the Silicon gold project and the definition of a large multi-million-ounce gold deposit will position Orogen Royalties as a strong player in the gold royalty sector.

The REN management group has a long and successful history of finding mines in Nevada and are very capable explorers. The EVM management group has established a good working relationship with industry partners and knows how to structure exploration agreements that allow for the projects to be advanced quickly. Together, they represent an excellent “formula for success.”

We encourage our readers to roll up their sleeves and do their own due diligence on EVM/REN. There is an opportunity, “hiding in plain sight.”

Disclosure: At the time of this writing, we do not own shares of EVM or REN, but may purchase shares at anytime. 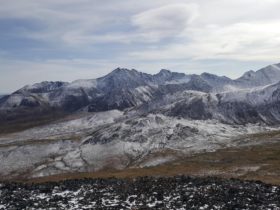 Evrim Resources Corp., EVM.V, a prospect generator, shows it can “bounce back” from a market set-back. Here's a look at the chart for Evrim Resources.