Thinking of buying gold to beat inflation? Think again. Why one of the most trusted inflation hedges of all time shouldn't be based on inflation.

This metal has an unmatched track record. It has reliably grown in value for thousands of years. If you don’t believe it, just fact-check a long-held rule about gold…

Its record goes back as far as ancient Rome when an ounce of gold could put you in a fancy toga worn by the elite.

How’s that for retaining your purchasing power?

But unlike what you’ve been taught, gold has little to do with inflation as we know it. That’s why it doesn’t react to the Consumer Price Index (CPI) in a way most investors expect it to. Which leads to confusion and conflicting headlines like: 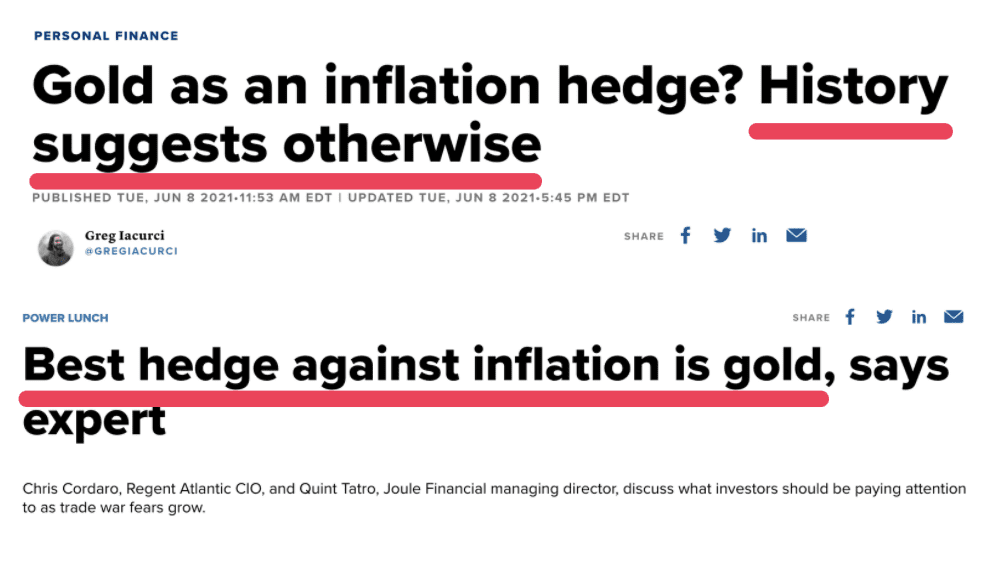 So let’s take a deeper look at gold as an inflation hedge. We’ll discuss its complicated affair with inflation—and when it shines best as an investment and shield for your nest egg.

But first, let’s wind back a bit…

Nixon Sends Gold to the Moon

To revive global trade, the world’s leaders met up in Bretton Woods to create a new, more stable monetary system. They drew up a plan known as the Bretton Woods agreement.

You can learn more about this in a previous letter, by clicking HERE.

In short, the agreement restored the gold standard. It bound most major nations to peg their currencies to the dollar—which was fixed to the price of gold.

Which means you could go to the bank and swap out your paper notes gold at a fixed rate. This also meant that whichever nation owned the most gold, owned the most money – which, after war, was most certainly the US.

But by 1971, America’s gold reserves couldn’t keep up with the dollars in circulation. And as part of his monetary reform, Richard Nixon unpegged the dollar from gold.

This marked a new monetary era of “paper” money. Exchange rates began roaming free again. And the artificially inflated dollar crashed, setting off one of the worst inflation breakouts in America’s history.

In just a few years, US inflation surpassed 10% and savings started to dry up. People lost faith in government-issued currencies and fled to gold and other real assets.

The exploding demand soon doubled gold’s price from the $35 fixed rate per ounce to $70. And by the turn of the decade, gold roamed 10X passed $650/oz.

Until 1980, precious metals were the only reliable shelter from inflation. Aside from the metals and some other real assets, all investments—stocks, bonds, and even most real estate—lost value in real terms.

But then things for gold suddenly went south…

The Straw that Broke the Camel’s Back

In 1979, Paul Volcker took charge of the Fed. Inflation was still at dire double-digits and growing. So Volker did what none of his predecessors had the nerve to do.

He brought rates to the highest point in history—20%! Money became so “expensive” that central banks were lending money at predatory cash loan rates.

Soon after Volcker’s hikes, gold hit its all-time peak and took a massive tumble. In just a few years, the metal crashed from $2,379/oz to $890. The decline continued for the next 30 years.

In real terms, the price of gold still hasn’t recovered: 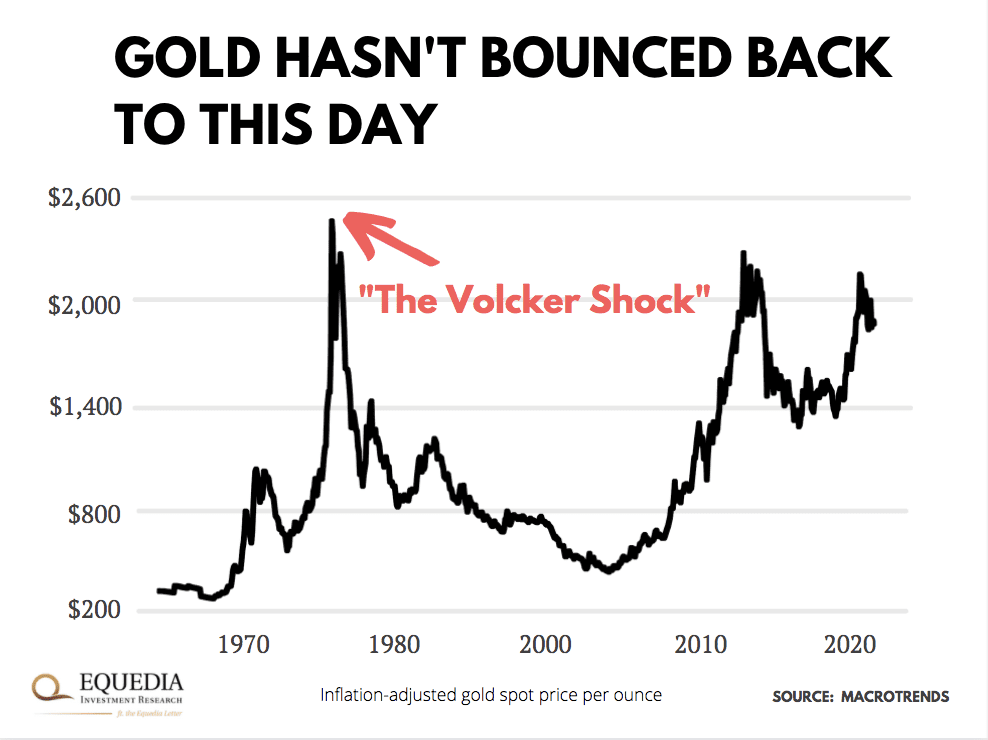 Not only that, gold has failed to keep up with inflation.

So what happened? Why did gold go downhill and the gold/inflation pattern break?

After all, interest rates were already at 10% before Volcker. And yet gold didn’t give a damn about it. Volcker just pushed them a little higher and faster than expected.

For the most part, gold doesn’t have anything to do with inflation. And most of the time, it doesn’t move in tandem with inflation. In fact, gold tumbled in most inflationary periods after 1980.

In other words, investing in gold based on inflation has largely been a money-losing strategy. Had you used it since 1980, you’d have blown most of your money.

What gold really pays attention to is real interest rates.

In the market, that’s the interest on “risk-free” debt minus the inflation rate. The higher the real rate, the more you earn in interest after inflation.

Take a look at this chart which shows gold’s near-perfect inverse relationship with real rates on 3-month Treasuries (common benchmark): 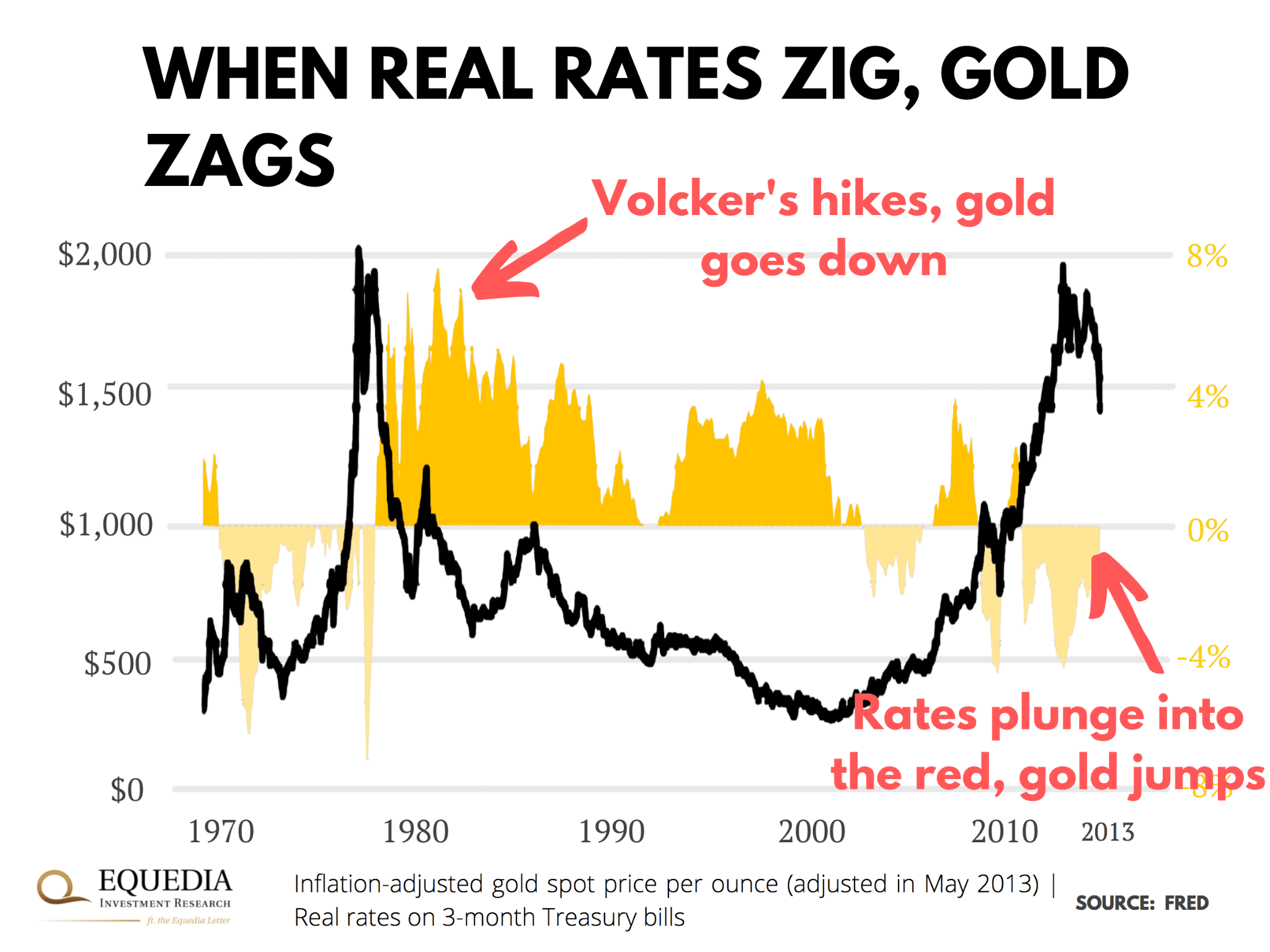 See where Volcker’s hikes brought the rates out of the red… and how gold crashed soon after? Or how negative rates after 2000 launched gold into the biggest rally since the ’70s?

This gold-rate affair may sound complicated, but…

It all comes down to common sense

Like any other asset class, gold fights for a place in the portfolio with other investments. But unlike most investments, gold doesn’t generate earnings or income.

That means holding this metal comes with higher opportunity costs. Or put another way, the more you earn from, say, stocks or bonds, the less you want to invest in a metal that doesn’t earn a thing.

This is where real rates come in.

When real interest rates grow, so do bond interest and investors’ income from this asset class.

As the appeal of bonds grows, investors move more of their portfolios to this asset class. In turn, demand for gold falls and so does its price.

If real rates go down (or sink into the red like today), bond investors lose money. So they naturally rebalance to other asset classes—including gold—and bid up their prices.

And that brings us to the most important question at hand…

Where are real rates headed?

To answer it, we first have to understand why central banks fiddle with rates in the first place.

As you may know, interest rates are one of the three tools in a central banker’s toolbox. They use them to control the price of money, which lets them stimulate or cool off the economy as needed.

Here’s how it works.

When the central bank raises rates, it props up interest on all debt. As a result, the cost of borrowing money goes up. In turn, spending goes down, and the economy slows.

Now, when rates drop, so do borrowing costs. More people and businesses can borrow money for cheap. They lease cars, take out mortgages, and otherwise spend it, which props up the economy.

So, where does this leave us today?

Inflation is rising. And many estimates show that consumer prices will keep marching higher for the coming years.

Meanwhile, real interest rates are the lowest since the 1970s. Even the riskiest junk bonds earn negative real interest. That’s nuts. Investors are essentially losing money even by risking it on garbage companies.

Not much appeal in bonds, I would say.

Are rates coming back up anytime soon? Probably not.

The Fed pledged to keep rates at the ground floor well into 2023. The Bank of Canada isn’t crazy about raising rates either – especially if the U.S. holds still. And when the economy is so fragile, no central banker is in the mood for pulling off surprises.

That means that, at the very least, there won’t be any significant hikes before the end of 2022.

Even after that, central bankers will be very, very cautious about raising rates – especially if politicians have their way.

Of course, the flip side is trying to understand what the Bankers really have planned for us.

In the past, these bankers flexed their muscles by contracting the money supply (raising rates). If the politicians in power weren’t bending to the will of the Bankers, most notably to renew central bank charters, the Bankers would flex. Contract the money supply and you contract the economy. This flex led to the Federal Reserve central banking system – a system that gave the Bankers carte blanche control over the world’s biggest monetary system.

Where does that leave us today?

Or perhaps they’re going after the “Great Reset” we talked about in a previous letter.

The world has amassed the biggest mountain of debt in history (relative to GDP). The stock market is as leveraged as ever, and so is housing.

National deficits are through the roof.

Imagine the domino chain of defaults higher rates could set off. And who would be willing to take the blame for it?

This is why we believe real rates aren’t going anywhere significant anytime soon. And that means there’s still plenty of upside left for precious metals and stocks tied to them.

And lastly, one could argue that the Bankers’ role is diminishing as people fight back via cryptocurrencies such as Bitcoin. But this is a worthless argument today.

Because today, the Bankers have an unlimited supply of money. And with that, they could easily control the majority supply of Bitcoin. It is mostly anonymous after all, no?

Seek the truth,
Carlisle Kane
Equedia.com and Equedia Network Corporation are not registered as investment advisers, broker-dealers or other securities professionals with any financial or securities regulatory authority. Remember, past performance is not indicative of future performance. This article also contains forward-looking statements that are subject to risks and uncertainties that could cause actual results to differ materially from the forward-looking statements made in this article. Just because many of the companies in our previous Equedia Reports have done well, doesn’t mean they all will. It’s your money to invest and we don’t share in your profits or your losses, so please take responsibility for doing your own due diligence and consult your own professional advisers before investing in or trading in the securities mentioned in this newsletter.
Tags: gold inflation inflation hedge
Share on
Share on Facebook Share on Twitter Share on Linkedin Share on Reddit
Equedia September 12, 2021