Stocks are down and the Fed has hinted at up to three rate hikes next year. Is the bubble finally popping?

Share on
The market is dropping. The Fed has signalled up to three rate hikes next year. And billionaires are dumping stock. And inflation is raging.
What the heck is going on?
Is the market about to crash?
Let’s see what’s going on.

Remember that iconic scene from Interstellar?

Joseph Cooper and the crew leave the spaceship to scout Miller’s planet.

They’re in a rush because Miller is orbiting a black hole. And it’s warped the planet’s time-space so much that every hour spent there equals seven years on Earth.

Things don’t go as planned, and the crew is stranded on the planet for a few (Earth) hours.

By the time they return, 23 years have passed on Earth. And a message from Cooper’s daughter back on Earth reveals she is now older than him.

The movie is a great pop-culture depiction of Einstein’s theory of relativity, which showed time is relative. It slows down in fast-moving objects or strong gravitational fields—like those near a black hole.

There’s a “theory of relativity” in finance, too.

There are two parallel universes where money ages differently.

There’s a nominal universe in which inflation doesn’t destroy wealth; it grows it. The world’s richest hold most of their assets in this safe haven.

And then there’s the real (inflation-adjusted) universe where inflation takes away purchasing power like Cooper’s daughter’s years. It’s mostly inhabited by the working class who live paycheck-to-paycheck on depreciating wages.

In a moment, I’ll show how the Fed’s policies warped financial “time-space” to enrich the nominal world.

And how the ultra-rich are rushing to realize their fortunes before the Fed pulls back.

The Fortune-Building Window Is Closing

Since the first uptick in prices, the Fed’s chair, Jerome Powell, was assuring us that inflation was “transitory.” And that the Fed didn’t have to step in.

He acknowledged inflation wasn’t going anywhere. And although he just hinted at thinking about taking action, that slight hawkish shift in tone sent markets into a tailspin.

After Powell’s speech, the S&P 500 went on a rollercoaster, closing at least 1% lower for five straight days. This was the biggest bout of turbulence in over a year. 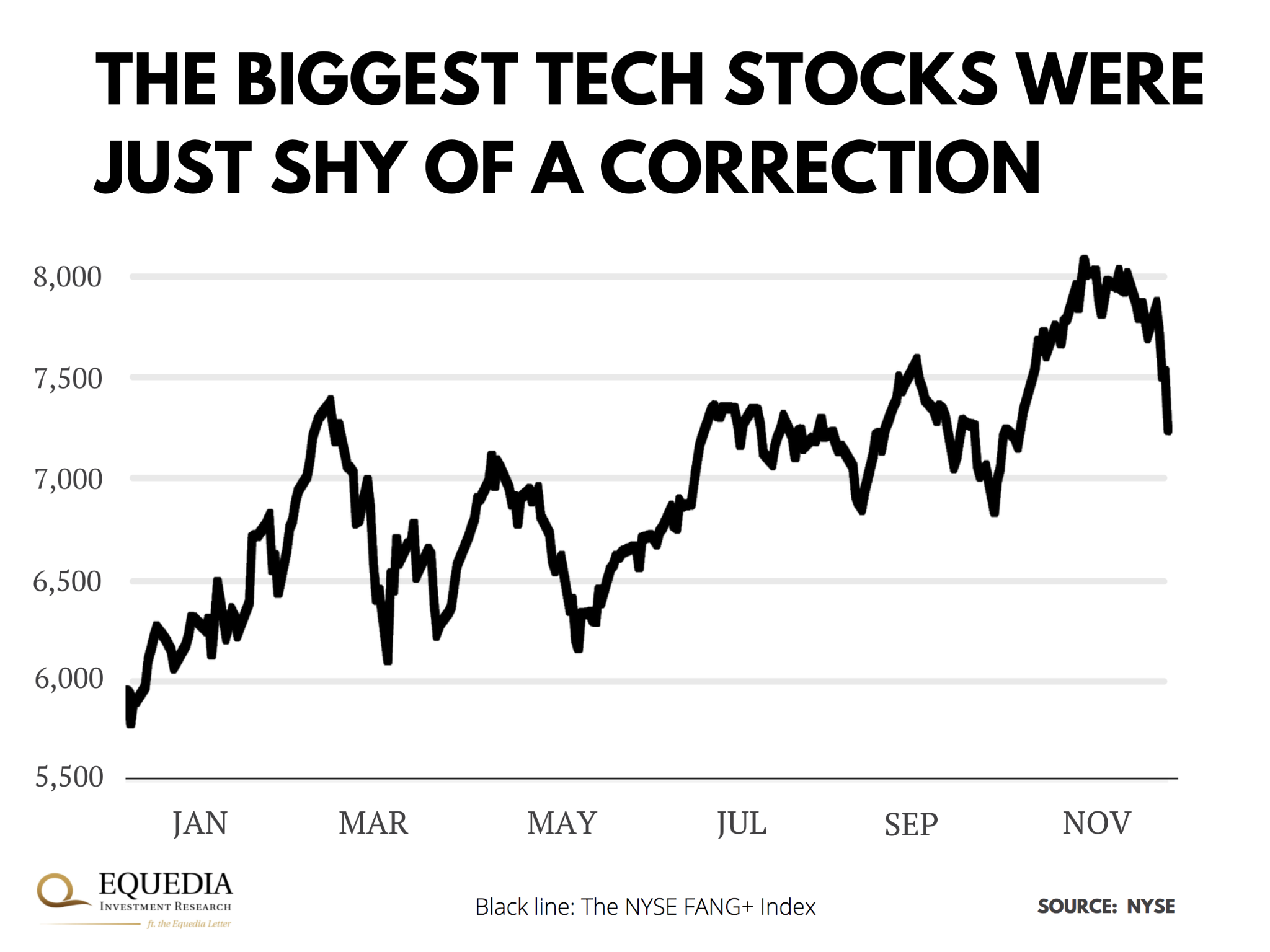 As I write this, Tesla is down 14%, Shopify slid 10.5%, and Zoom slumped 16.5%. Some of the biggest pandemic winners like DocuSign were even slashed in half.

Why so much drama over Powell’s mere tone switch? After all, the economy is doing fine, and, as we discussed last time, businesses are making out like bandits.

It has to do with how stocks are priced.

How much is a stock worth?

It depends. Investors use a ton of valuation metrics to gauge the intrinsic value of a stock. But in the end, they all boil down to two things:

Take price and earnings ratio (P/E), the most common benchmark for stock valuations.

Now, here’s what happens during inflation.

When inflation picks up, products and services become more expensive. And if the economy is in good shape, businesses often pass the costs of inflation on to the consumer.

The result is their nominal earnings (E) grow against the stock price.

In other words, Big Corp doesn’t have to grow real sales or innovate to bring capital gains to shareholders. They can just sell stuff at higher nominal prices.

And while inflation destroys purchasing power in the real universe, asset value in the nominal universe grows along with it (and often even higher).

I proved it in my recent letter “The Inflation Strategy That Works 100% of the Time,” where I showed stocks beat inflation 100% of the time in any 15-year window.

In the past, central banks would step in and raise interest rates to rein in inflation, which affected risk assets in two ways.

Meanwhile, bond yields rose and let savers take shelter in higher-earning safe-havens. They became more competitive against riskier assets, such as stocks, and bit into their valuations, too.

In this inflation breakout, they held interest rates down all along. In turn, rising prices blew up nominal earnings and forced people out of money-losing bonds into stocks, cryptos, and other risk assets.

The end result is stocks hit the highest valuations since the dot-com bubble: 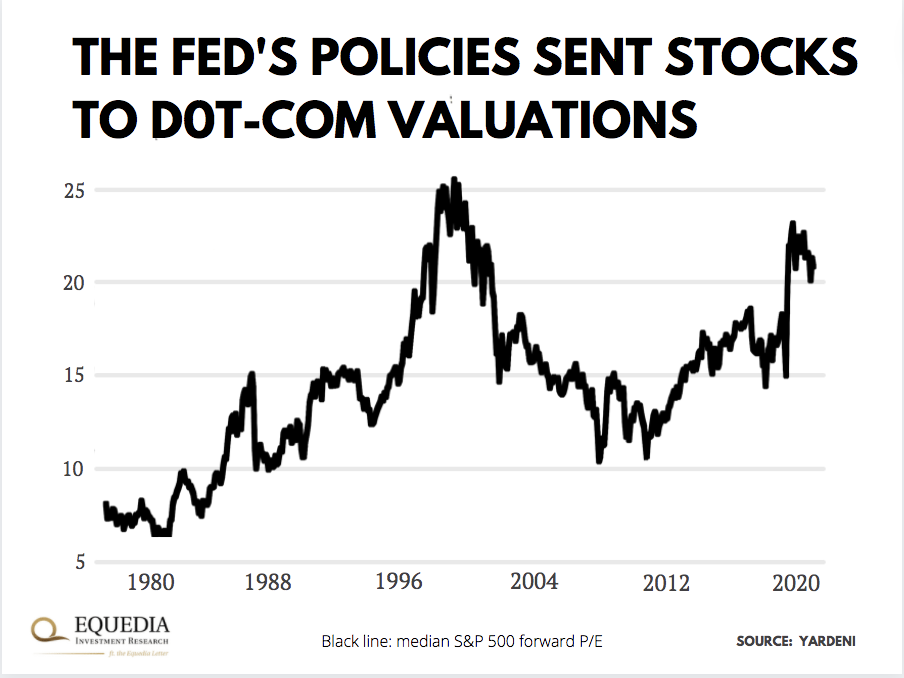 Money in the Real Universe is Eroding

Growing wages may create a nominal illusion that the real world is also better off. After all, many American workers are bringing home bigger paychecks. Right?

But, they are also shelling out much more for food, gas, and other stuff whose prices are soaring the most they have in decades.

As I wrote in “With Great Power Comes Great Responsibility. Unless You’re Part of This Group“:

“Last month, the Consumer Price Index (CPI) surged 6.2%—the biggest yearly jump since 1990. And, if you drill down deeper, the price increases are even more mind-boggling…

All that in just one year!”

And adjusted for inflation, wages have actually crumbled since the beginning of Covid: 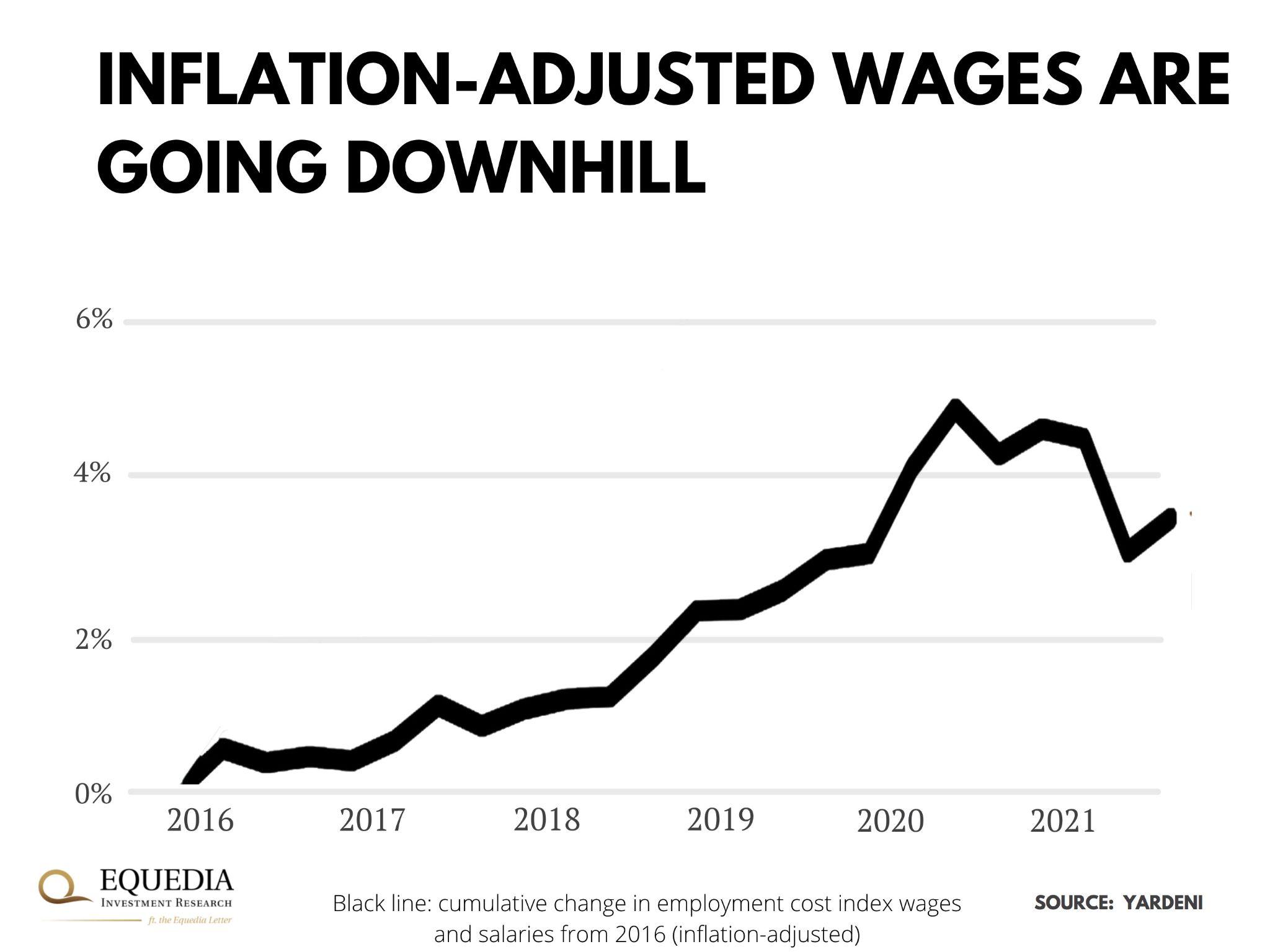 In other words, the real world is not keeping up with inflation. Money is eroding so fast that nominally higher-earning workers have almost drawn down their Covid savings: 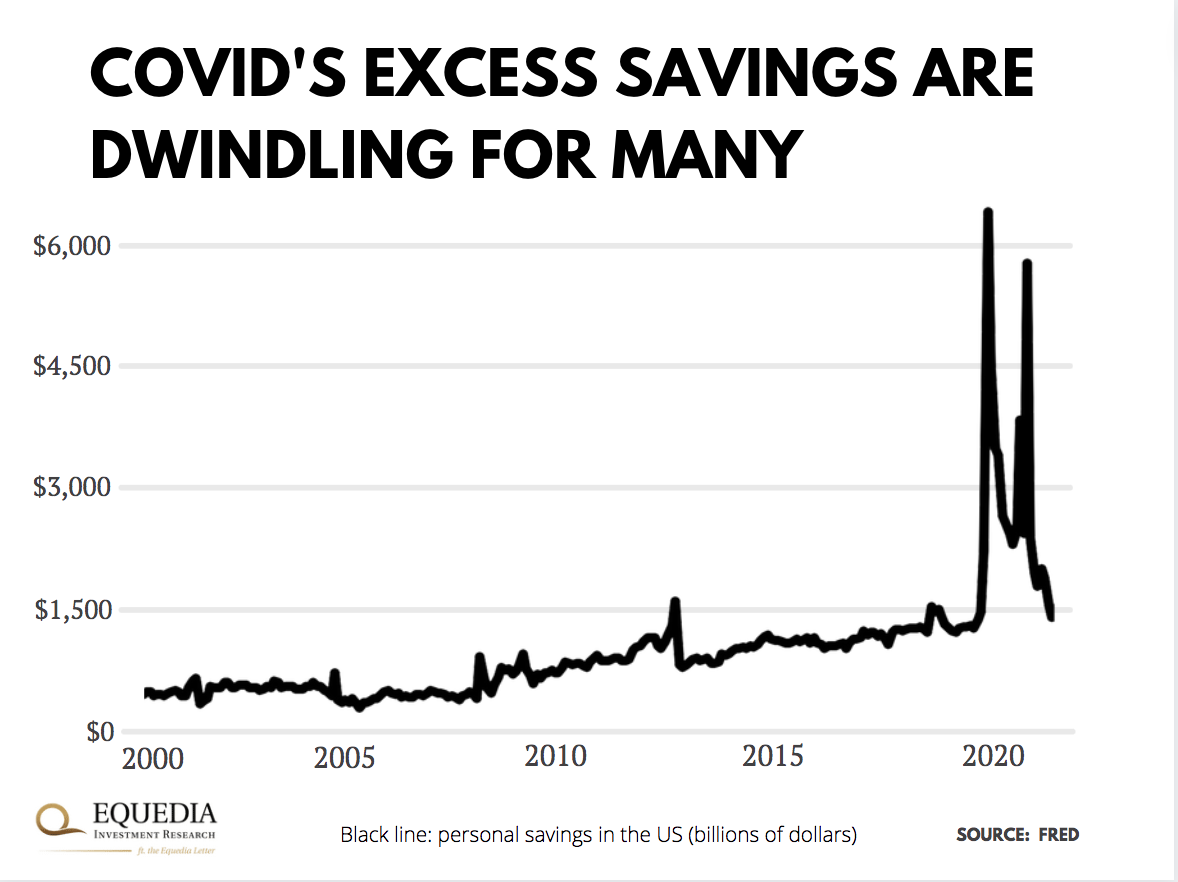 By now, the evidence has become so clear that the Fed has run out of excuses. So, it has no choice but to step in to pre-empt political backlash.

The Ultra-Rich Are Pocketing Nominal Fortunes

I am sure you’ve heard about Elon Musks’s controversial Twitter poll where he asked his fans for “permission” to sell 10% of his stake in Tesla?

That means Musk has a right to buy thousand-dollar shares for less than ten bucks to pocket around $28 billion (at today’s price).

The problem is these options expire in April. And by my calculations, he has to pay around $15 billion in taxes to exercise them before they expire.

Knowing the size of stock sale, smart investors – like those who voted in favour of Musk’s sale – should have shorted against that, even if only a temporary short.

Unfortunately for Musk, he’ll get lumped in with other Big Corp players taking advantage of all-time high stocks.

Jeff Bezos sold $9.97 billion worth of Amazon stock this year. That’s 4X higher than in 2019 and far more than an average of $1 billion a year in earlier years.

In all, insiders pocketed a record $69 billion from stocks this year. For perspective, that’s up 30% from 2020—and 79% more than a 10-year average, according to InsiderScore.

Unfortunately, this may not be the end of the sell-off.

Stock sales are likely to pick up this month because the House is tossing around new surtaxes on capital gains. And executives will likely rush to cash out gains before the tax hikes.

And you can bet that hedge funds and other institutions will add more fuel to that fire, by shorting against stocks where they know big sales are coming.

This may seem like a self-correcting system because asset valuations historically revert to the mean.

Asset value blows up and turns into a bubble. The rich get richer on paper. Then the bubble bursts, and paper fortunes burn up.

But in reality, the rich often get their butts out just before the pop. The same way Musk, Zuckerberg, and Bezos are bagging billions from overpriced share sales today.

And it’s the average Joes who rush into risk assets at exactly the worst time and get wiped out (see our DOW technical chart analysis with Ivan’s comments).

(Look at how the Gini index [the benchmark of financial inequality] has barely budged during the dot-com crash and the housing collapse. That’s despite the wealthy holding disproportionally more risk assets.)

The elites then buy those assets back at bargain prices, and the cycle repeats…

Hopefully, this month’s downturn is temporary, and bargain hunters find a better entry point into an already inflated market.

This is by far the single most powerful drug in the world - And this dealer controls almost all of it. 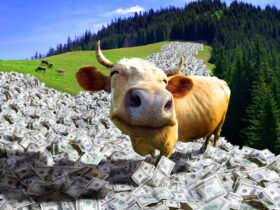 The Inflation Strategy That Works 100% of the Time

Inflation is once again in the headlines - But don't worry, this simple investment strategy beats inflation 100% of the time.