VANCOUVER, BC: Integra Gold Corp. (TSX-V: ICG; OTCQX: ICGQF), (“Integra” or the “Company”) is pleased to announce the second tranche of assay results from its 2015/2016 infill drill program on the No. 4 Plug Deposit (“No. 4 Plug”) situated at the Lamaque South Gold Project (”Lamaque”) located in Val-d’Or, Québec.

“Today’s results further validate the Company’s growth strategy of assessing the potential of satellite deposits in close proximity to the Triangle deposit with the objective of creating multiple draw points for future mill feed and utilizing excess milling capacity to increase the project’s overall annual production profile,” commented Company President and CEO, Stephen de Jong. “The No. 4 Plug has become a high priority as the deposit is only 500 metres from the Triangle deposit, would share underground infrastructure and is located on mining concessions, which have been converted recently to mining leases, as per the new Québec legislation.”

“Exploration and potential resource growth in proximity to the Triangle deposit continues to exceed our expectations and the Company’s aggressive exploration program on other targets is our way of leveraging off that success to investigate the potential to expand the production profile. Included within this growth strategy is drill testing of the Lamaque Deep target, which will commence in July, and testing of other targets from the Integra Gold Rush Challenge, which is set to commence in August.”

The results disclosed today are from the Company’s late 2015 and 2016 infill drilling program completed at No. 4 Plug. These results are significant given that high grade gold mineralization is still being identified and associated with high-angle shear structures, similar to those found at Triangle, while wider zones forming vein clusters continue to be recognized. The results are enhancing the Company’s modelling efforts and resource estimation approach which in turn will help future optimization on the deposit.

As the gold distribution in the thick clusters of brittle, shallow dipping tension veins have the tendency to portray a higher nugget effect relative to the high angle C-type structures, the selection of disclosed intervals is partially controlled by the visual occurrence of veins in drill core along with grade distribution, providing a further layer of control for the spatial constraining of these thick vein clusters. The reported intervals are clearly visually identifiable in terms of vein densities present in drill core.

Infill drill holes disclosed today are located on the eastern side of the No. 4 Plug along a 100 m long east-west trend demonstrating lateral continuity of the gold mineralized clusters. The table below highlights the selected results from this second tranche of the No. 4 Plug drilling program. The summary results are presented uncapped and, when applicable, with high grade individual values capped at 34.3 g/t Au (results are also available with high grade values capped at 20.0 g/t Au in the full assay table available at the link below). We note that even a rigorous capping of high grade assays within these expanded intervals continues to maintain average grades significantly above the 1 g/t cut-off range.

Links to No. 4 Plug Assay Table, Section and Location Map

Click on the following link to view a complete table of available composited results for the 2015/2016 drilling at No. 4 Plug (results disclosed today are identified in red colored font):

Click on the following link to view a set of two idealized and schematic composite sections showing the spatial relationship between the Triangle and Plug 4 gold deposits and illustrating selected results from the 2015/2016 drilling program.

Click on the following link to view a location map of the different gold deposits present at Lamaque South:

Abundance of Vein Arrays/Clusters Differentiate No. 4 Plug Mineralization from Triangle

Gold mineralization at No. 4 Plug, located 500 m north of Triangle is, in part, hosted within a series of steeply-dipping stacked shear zones similar to C-type structures found at Triangle. What makes No. 4 Plug different is the abundance and frequency of flat lying to gently dipping tension veins which form large clusters that could potentially be amenable to bulk mining methods. These large gold bearing vein clusters have striking similarities to bulk zones mined historically at the Lamaque Mine, where historical records have recorded mining in panels in excess of 50 m wide. The style of mineralization at No. 4 Plug also closely resembles the nearby Agnico-Eagle Goldex Deposit, situated just west of Val-d’Or in the same gold district.

The Company intends to complete a new resource estimate this year on No. 4 Plug to be completed during Q3 of 2016, and will be included in the end of year property-wide resource estimate on the Lamaque-South Property. Following this new resource estimate, Integra also intends to conduct a study aimed at the potential amenability of No. 4 Plug to low-cost, underground bulk mining methods. Given the ample milling capacity and scalability of the Sigma Mill Complex (2,400 tons per day (“tpd”), expandable to 5,000 tpd), the Company believes that a combined scenario of more selective high-grade mining at Triangle, in parallel with low-cost bulk-mining at No. 4 Plug situated 500 m next-door to Triangle, has the potential to ramp up production profiles beyond previous expectations and estimates.

Geological Setting at the No. 4 Plug

The No. 4 Plug is a sub-vertical dioritic/gabbroic intrusive, similar to the Lamaque Mine Plug (located 2 kilometres (“km”) to the northwest), which produced over 4.5 million gold ounces from surface to a depth of 1,100 m vertical. The No. 4 Plug intrusive is located 500 m north of Triangle and can be traced on surface for 200 m east-west by 150 m north-south, extending to a depth of over 1,000 m vertical. Gold mineralization is found within the intrusion hosted by quartz-carbonates-tourmaline shear veins associated with sub-vertical shear zones (similar to Triangle C-type structures) and flat lying quartz-carbonate-tourmaline veins that are present as dense vein clusters.

Preliminary interpretation of the reported gold bearing zones at No. 4 Plug indicate that these dense vein clusters can be tens of metres thick vertically, are geometrically stacked within the intrusion in the down-dip direction, and can also extend roughly 150 m to 200 m laterally. The mineralized vein clusters is more abundant below a vertical depth of approximately 200 m, and is confined to the intrusion. The intrusive host and the vein clusters remain open at depth. The mineralogy and alteration assemblages associated with these vein clusters consist of carbonate, sericite, albite alteration, with varying intensity and distribution, being more pronounced near the high-angle shear zones. Where these sub-vertical shear zones cross-cut the intrusion, brittle and shallower dipping tension veins are more prominent.

2016 Drill Program Expanded to an Estimated 120,000 m to include Lamaque Deep and Gold Rush Challenge Targets

The Company now anticipates drilling approximately 120,000 m in 2016 with the majority of this drilling aimed at defining and expanding the gold resource at the Triangle and No. 4 Plug Deposits. The bulk of the drill program, approximately 80,000 m, was completed during the winter and spring months, from January to June 2016. Following the construction of surface access roads, the Company expects to be able to continue drilling throughout the summer and fall with 4 drill rigs in operation. Integra’s planned 2016 drill campaign remains one of the largest drill programs underway in the entire gold exploration industry.

The ongoing drill program includes exploration, extensional, and definition type drilling on key targets such as Triangle and the No. 4 Plug gold deposits. The program also include exploration drilling, to be initiated in August 2016, of promising new targets generated from its Gold Rush Challenge.

In July 2016 the Company will also be starting a 2 km long pilot hole to test the extensions, below the lowest mined and explored level of 1,100m vertical, of the Lamaque Mine. The Lamaque Mine, which produced over 4.5 million ounces over its 50 years mine life, was the largest gold mine in Québec for 30 years. Its neighbour, the Sigma Mine, which is located only 400 m north, also produced over 4.5 million ounces but to a depth of 1,850 m vertical.

Additional information on these new targets will be provided by the Company in follow-up news releases once drilling begins.

To date in 2016, a total of 76,500 m in 130 holes have been completed at the Lamaque South project.  Results announced today are from 6 holes drilled at No. 4 Plug representing 5,415 m of the 12,035 m 2015/2016 program. Including the fall 2015 drilling, as of June 15, drill results are still pending for approximately 66,550 m of core from Triangle, No. 4 Plug and other exploration targets; results will continue to be disclosed during the year as they become available.

Integra Gold is a junior gold exploration company exploring advanced stage projects in Val-d’Or, Québec, one of the top mining jurisdictions in the world. The Company’s primary focus is its high-grade Lamaque South project. In 2014, Integra completed the accretive acquisition of the Sigma Mill and Mine Complex, a fully permitted 2,200-2,400 tpd mill and tailings facility. With major federal and provincial permits in place, existing infrastructure and significant exploration potential, this acquisition removed major costs and shortened timelines typically associated with developing mine projects. With a current market capitalization of approximately $300 million, Integra has raised over $100 million since 2013, at successively higher share prices, despite depressed gold prices. In August 2015, Eldorado Gold Corporation completed a strategic investment in Integra, acquiring 15% of the outstanding common shares. Integra was recently named to the TSX Venture top 50 performers in 2015 and the OTCQX Best 50 award for 2015.

The Lamaque project is under the direct supervision of Hervé Thiboutot, Eng., Senior Vice-President of the Company, and Jacques Simoneau, P. Geo., Exploration Manager of the Company. Mr. Thiboutot and Mr. Simoneau are Qualified Persons (“QPs”) as defined by the National Instrument 43-101. The Company’s QPs have reviewed the technical content of this release.

Thorough QA/QC protocols are followed on the project including insertion of duplicate, blank and standard samples in all drill holes. The core samples are submitted directly to the Bourlamaque Laboratory in Val-d’Or for preparation and analysis. Analysis is conducted on 1 assay-ton aliquots. Analysis of Au is performed using fire assay method with atomic absorption (AA) finish, with a gravimetric finish completed for samples exceeding 5 g/t Au. Metallic sieve assay is conducted, additional to the regular fire assay methods, for all samples containing visible gold. Results published are from the metallic sieve assay results is available, if not they are from the gravimetric finish if above 5 g/t and from the AA finish if lower than 5 g/t. 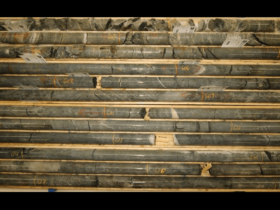 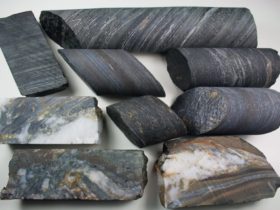 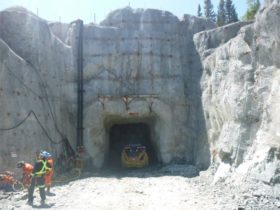 Integra Gold Corp. (TSX-V: ICG, OTCQX: ICGQF) announces the initiation of a 2,000m pilot hole on its Lamaque Deep target, situated on the Lamaque Gold Project located in Val-d'Or, Québec. Once the pilot hole has been completed (est. completion Q4 2016) the target will be tested with a minimum of 15 wedged holes originating from the pilot hole at various intervals. The Company is anticipating the entire program including wedges will total 10,000m of drilling...