Racial inequality pits one group against another, whereas economic inequality pits citizens against the rulers of an empire. So what's happening now and what does it mean for the stock market and our economy?

History is being ripped apart. Statues are being torn down. Buildings are being vandalized. Cops are being killed. Businesses are being ransacked. Innocent bystanders are being assaulted.

Yet, the stock market remains near its all-time highs. Go figure.

But why shouldn’t it?

According to the Bank of America, total global stimulus, including both fiscal and monetary, has already reached a whopping US$18.4 trillion this year.

“Trading stocks was among the most common uses for the government stimulus checks in nearly every income bracket, according to software and data aggregation company Envestnet Yodlee.”

And while I believed that the V-shaped recovery of the stock market due to COVID-19 was inevitable – led by the central banks and retail traders via the Robinhood app – the economy may not be so quick to respond.

Especially with what’s going on in the U.S.

In my last letter, Reality Exposed, I showed you excerpts of previous predictions on what would happen once Donald Trump became president.

In fact, I laid out precisely what will happen and how in my letter These Six Events Will Determine Our Future.

But more specifically, as it relates to today:

“They want us to be blind to the real problems in our society. And they do this by pitting us against each other; by using race as the focus of inequality, rather than economic inequality itself.

Now, before you go and attack Trump and blame him for economic inequality, look at this: 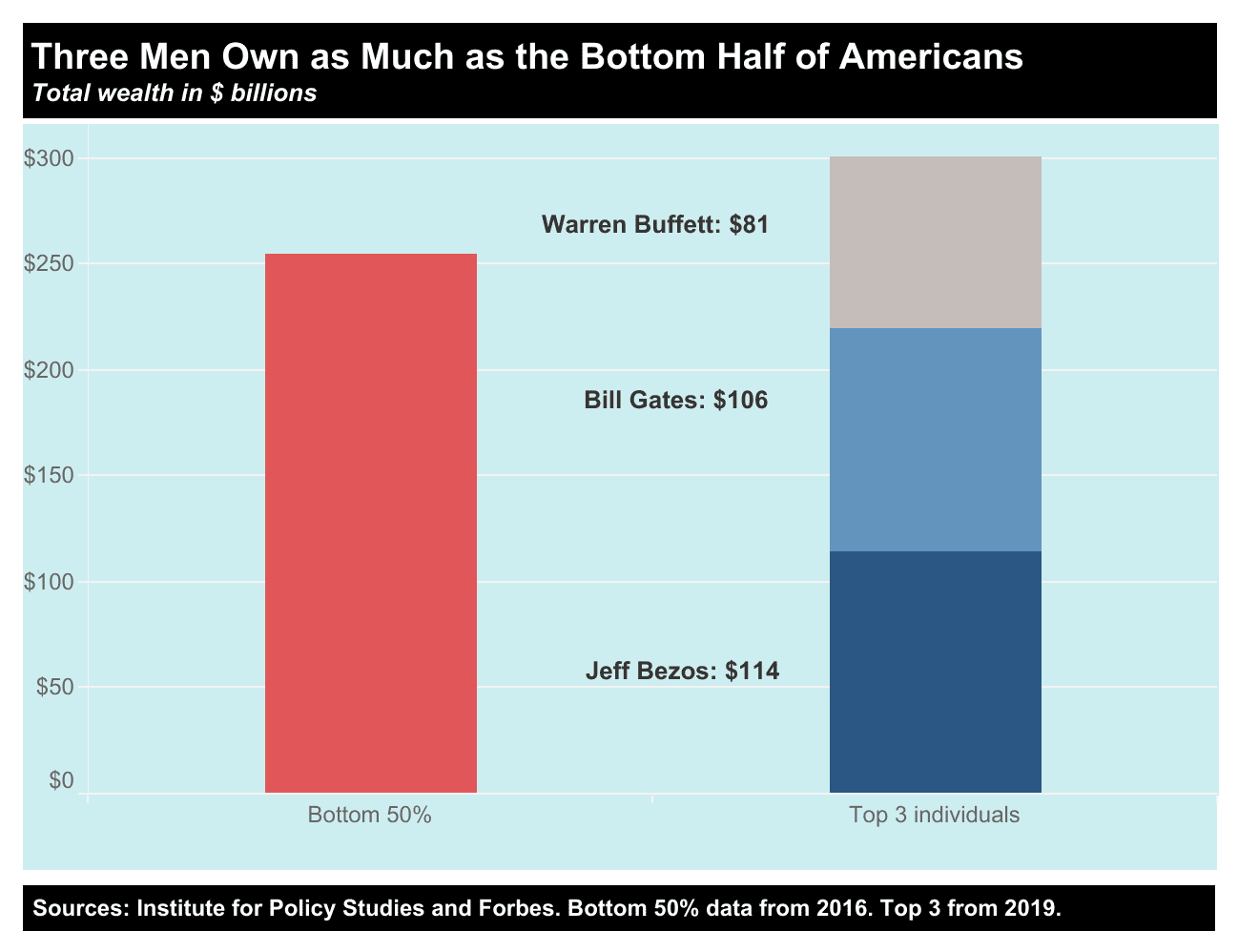 Together, Warren Buffet, Bill Gates, and Jeff Bezos own more wealth than the entire bottom half of Americans – that’s nearly 165.5 million people. None of these men are Trump supporters.

What I am trying to say is that Trump vs. the Left is just a distraction from the actual reality that exists today: control.

When the biggest corporations and the wealthiest people control all of the media, the banks, and government, the control of society is easy: They show you what They want you to see; They control your money; They make the rules.

So, where does that leave us today, and how should we be investing?

If you haven’t already, I strongly urge you to read my letter, These Six Events Will Determine Our Future.

In short, this was the chain of events I predicted:

2. Deflate: Take the good feeling away by taking away cheap money through Quantitative Tightening (Q.T.) and higher rates – decrease the money supply.

3. Control: Subdue the population by taking their focus away from the real situation. Think media control; think the increase of opioid usage and the legalization of marijuana; think President Trump; think billionaire-funded protests.

5. War: Mask the international financial and economic crisis through the rhetoric of war, or even war itself.

6. Reset: Global economic reset will be blamed on war, not the monetary actions of the powerful elite.”

Given that we’re already heavily into stage 4, the inevitable path to  stage 5 is near: war.

We’re already seeing global tensions rise – not just with countries, but with global organizations such as the United Nations and even the World Health Organization.

And in the U.S., a third of GOP voters believe a civil war is about to ensue.

Via the Rasmussen Report:

“The latest Rasmussen Reports national telephone and online survey finds that 34% of Likely U.S. Voters think the United States will experience a second civil war sometime in the next five years…”

And if Trump remains president this year, I am betting things are going to get completely out of hand.

As I said in my letter last year, A Most Radical Prediction, if Trump wins again in 2020:

“After Trump wins, he is going to go berserk.

Not only will he likely control the entire government, but he will unleash a new fiscal policy that will change everything.

He will lower taxes on the rich and those who are job creators; he will give huge incentives to businesses in the U.S. via tax breaks; he will borrow a boatload of money and begin a massive infrastructure spending spree, which will create jobs.

Heck, he may even convince the Fed to do QE4 – all of which will lead to a bigger bubble.

After all, he will have nothing to lose – there’s no more election to win.

In other words, he will do whatever it takes to prop up the economy and the stock market.

If the market can hold off until the U.S. elections next year, we may see yet another burst of enthusiasm in stocks.

The rich will certainly get richer under Trump, but he will create more jobs and make many blue-collared Americans happy.

For investors, the goal over the next couple of years is to make as much money as possible in the market before it comes crashing down. Because given the amount of exuberance in the market and the credit bubble that has been brewing for nearly a decade, things will break at some point.

And that some point will likely come during Trump’s last couple of years in office (if he wins) because he will unleash a fury during the first two.

But why? Why will things come crashing down if Trump will do whatever he can to make American great again?

From 2016, before Trump became president:

“For all we know, Trump, the master of the deal, may have already struck a deal with the bankers and politicians.

But as we know right now, Trump is anti-establishment and anti-globalization.

If Trump is elected under that presumption, we’re going to see the building blocks of the Establishment and globalization come under attack, and they won’t like it.

They will fight back, leading to major conflicts, including riots, protests, and potentially even war and assassination attempts.

What I write may be difficult to grasp at first, but as time passes, the light will shine.

Just keep in mind that throughout American history, whenever the Establishment has been challenged, it has always been followed by bear markets and economic contractions.”

Three years ago, when I made these predictions, they were hard to fathom.

But today, with the passing of time, has the light shined?

The stage is set for Donald Trump to fall. We’re already seeing riots and protests everywhere – the likes of which are extremely damaging to humanity. I am not talking about peaceful protests; I am talking about the killing of innocent cops, the deformation of property, and the destruction of law and order.

In other words, as I have stated very clearly in many past letters: make as much money as you can in the stock market today because SHIT will hit the fan. You need to be prepared.

This isn’t about greed – it’s about protecting your family.

Eventually, all of the debt we accumulated will have to be repaid – just as past social injustices are being repaid today.

Which leads to my friend John Top’s latest article…

Your Children Will Pay: Debts of Our Past Coming Due