Here's why inflation will be even higher next year. And why you won't even know it's coming.

The show has begun.

Last weekend, just as I predicted, Putin shut off all gas to Europe through Nord Stream. He later called on the West to lift sanctions; otherwise, the pipe would stay closed indefinitely.

In the wake of this news, Europe went into panic mode.

The Euro slid to 99 US cents, depreciating to the lowest level in two decades.

If that’s not a wake-up call, consider this.

Today, Europeans are paying 10x more for gas than they paid on average in the past decade: 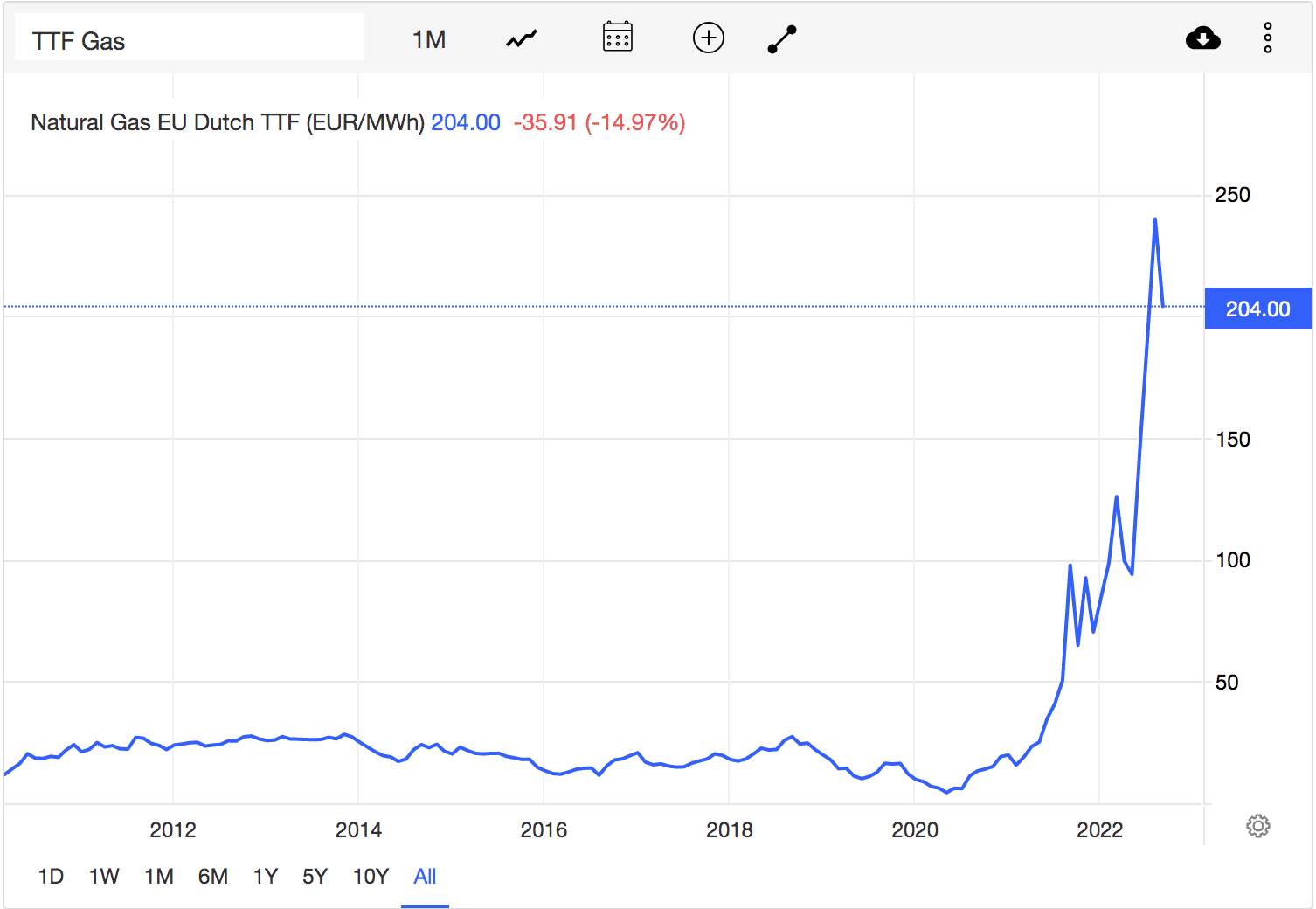 And it’s not just Europe’s problem.

Gas prices in the US have hit 9 USD/MMBtu, about 3x more than the average just before Covid.

The catch is that it won’t appear in official metrics, such as CPI, at first – as was the case in 1971.

And I’ll tell you how governments will hide this from you.

But first, let’s look at how inflationary Europe’s energy crisis truly is.

As I predicted in “Hyperinflation Warning: Europe’s Looming Blackout Could Be Worse Than Covid,” Europe’s worst nightmare has come true.

Here’s a little recap from that letter to bring you up to speed on today’s topic.

First, Europe is incredibly dependent on Russian gas for energy:

“Natural gas is Europe’s second biggest source of energy—a lot of which comes from Russia. For example, Germany, Europe’s superpower, imports two-thirds of its gas from Russia. And five Eastern bloc members, including the Czech Republic, Hungary, and Latvia, source virtually all their gas from Russia. In all, Russia pumps out around 40% of Europe’s gas.”

Europe used to import all that gas directly from Russia through the Nord Stream pipelines. Now they’re shut for who knows how long, meaning Europeans just lost 40% of their gas supply.

Sure, they’ve got strategic reserves and worked diligently over the summer to fill them.

The problem is, by all estimates, European reserves won’t last through the winter.

The second problem is that they can’t import gas from elsewhere on short notice because shipping liquefied gas requires different infrastructure, and there isn’t enough LNG gas on the market:

“Apart from direct supply through pressurized pipelines like Nord Stream, natural gas has to be shipped in liquid form by special tankers, then turned back into gas when it arrives in the country (aka “regasification”).

This is a new supply model for which many EU countries aren’t ready. For example, Germany has no regasification infrastructure and can’t build one fast enough.

Jacob Kirkegaard, a senior fellow at the Peterson Institute for International Economics, wrote: “You’ve still got to get all the pipeline infrastructure laid. So it’s certainly not going to happen this year; it’s too late for this to be a relevant source of supply for Germany this winter, even if it will be a major role during the next one.”

This is why 10x increases in gas prices may not even be the end.

This Isn’t Just About Energy Bills

Most people seem to be dead-focused on the most immediate consequence of Europe’s energy crisis: utility bills.

But let’s not forget that energy is the first key input in the making of virtually everything: from extracting raw materials like steel to manufacturing capital goods and final products, such as your iPhone.

If you are a flooring maker, and one day you pay $50/MWh to run your factory and the next $1,000/MWh, what do you do? (That is, in fact, the question many manufacturers in Germany are dealing with right now.)

You pass that cost on to the consumer by adding a fat markup on your final product.

In other words, inflation often starts at the very beginning of the supply chain.

But this time, we won’t see it coming, ticking up 0.5-1% month after month as it did post Covid. In fact, prices may even come down at first, then come roaring back when we least expect it.

Because policymakers are making a radical intervention in energy markets.

Last week, Europe’s biggest economies pledged to pass a $375 billion fiscal package to last through the winter. The UK alone is planning to spend $150 billion in just the next 18 months.

For perspective, this package is the equivalent of a $1 trillion stimulus in the US (And remember, that’s on top of trillions spent on Covid relief. But we’ll save deficits for another discussion.)

Where will all these dollars go?

They’ll be used to cap energy prices for 18 months or so.

As I wrote in a previous letter, European governments are now gobbling up gas on the market with no regard for its price. By recent estimates, LNG stock-up is costing Europe 10x (yes, ten times) more than Nord Stream.

So in a free market, this cost will simply trickle down to household and business power bills.

But European politicians aren’t going to let that happen.

Instead, they’ll subsidize utility companies with hundreds of billions of dollars, so they don’t pass on those insane gas prices.

In fact, this has already been happening to a small degree.

For example, since last October, France has frozen the gas prices households pay to its largest utility provider, Engie Sa.

Now it will happen on a continent-sized scale.

Some countries, including Sweden and Finland, will use fiscal stimulus to bail out their poorly hedged utility companies to prevent what they call a “Lehman” moment in energy.

And for the cherry on top, Europe is proposing to ban the trading of power derivatives.

In other words, after 50 years, price controls are back, which means nominal energy prices have lost all relevance because hundreds of billions in fiscal money artificially suppressed them.

But what happens when the money runs out?

You don’t have to look far back to see what a ridiculously dangerous idea this is.

In August 1971, after scrapping the gold standard, President Nixon took the remarkable step of freezing all prices and wages to tame inflation. 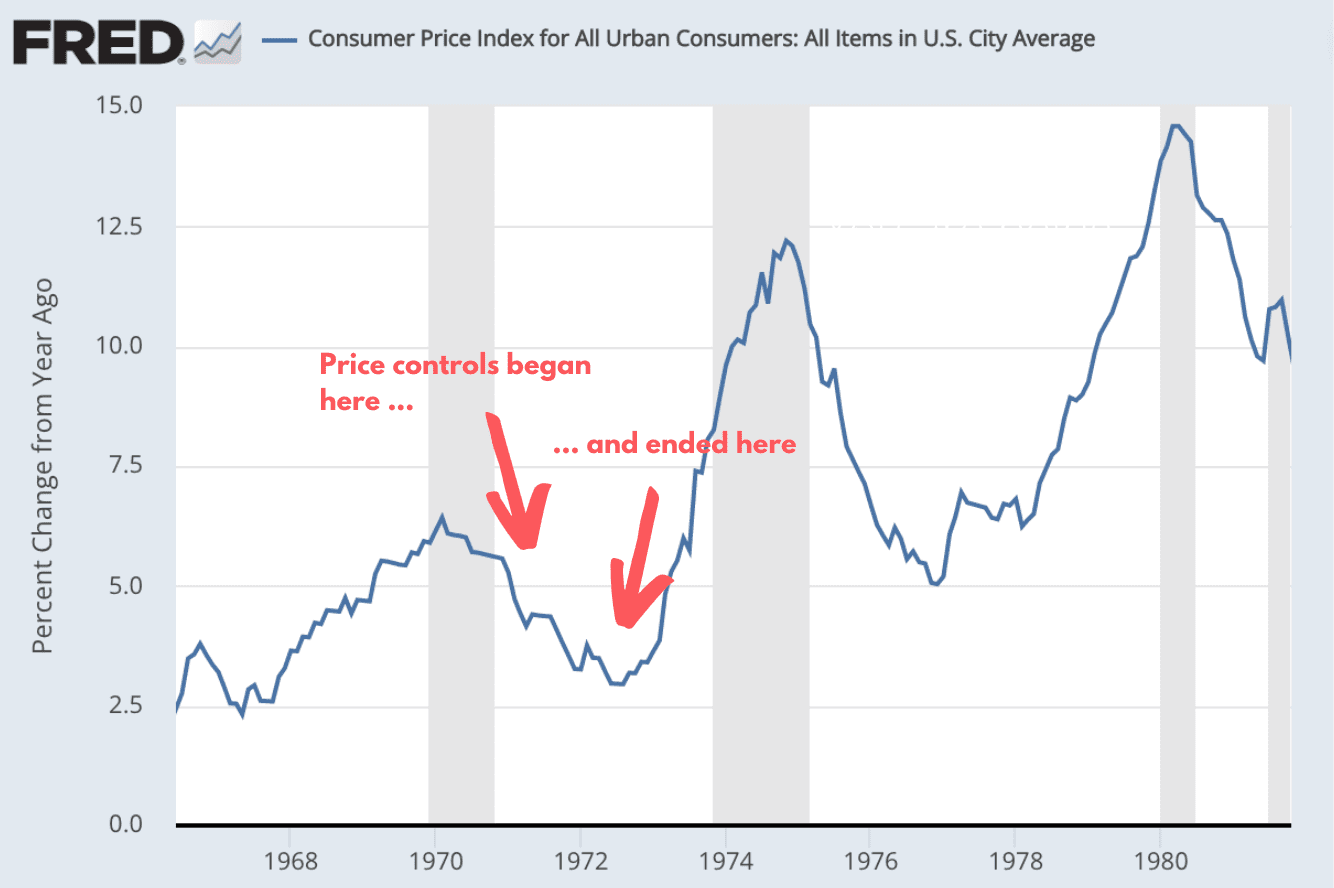 But once the lid was lifted, pent-up inflation soared through the roof:

And the Fed couldn’t stop it for eight years until Volcker had the guts to bring the rates to a record 20%.

You could say that Nixon’s gambit was a much bigger intervention because it capped the prices of everything. But fixing energy prices is not so much different if you think about it.

As we just discussed, energy is the staple resource that kicks off every single supply chain.

So if the government temporarily suppresses the ten-fold marginal increase in its cost, it is, in effect, slapping the lid on 99.9% of products and services in the economy that depends on it.

Real Inflation Will Show Next Year

Official inflation metrics have always been of little use to gauge real fiat erosion.

But now that fiat-denominated energy prices have been artificially capped, metrics like CPI are completely out of touch with reality.

In fact, it wouldn’t surprise me that CPI could come down in the coming months.

Just like Nixon, Democrats will conveniently chalk it up to their “anti-inflationary” act. But when this Keynesian intervention ends next spring or summer (conveniently after the mid-terms), the world could be in for a surprise.

So don’t loosen up too much on the news of “falling inflation” because if things don’t change their course immediately, the worst of inflation hasn’t even begun.

In the meantime, keep stacking up real assets. And yes, consider energy stocks. 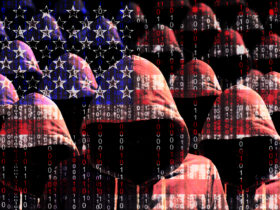 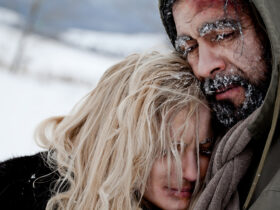 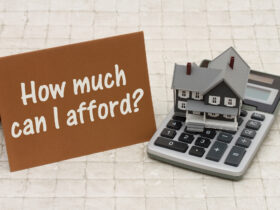