Think COVID was bad for inflation? Here's what could happen this winter if Russia wants to flex.

What COVID did to inflation had a tremendous toll on everyone’s wallets.

But what could happen next may be even worse.

And we’ll find out in just a few short months.

Europe on the Brink

We are halfway through summer, and Europe is already crumbling under its energy fiasco.

Like the homeowners in China I wrote about last week, the people of U.K. are banding together to boycott record energy prices.

Meanwhile, Europe has begun rationing power to build reserves ahead of the energy-intensive winter.

But why such extreme measures? Is it because energy prices are rising? Can’t Europe subsidize itself out of this energy crisis?

You see, it’s not about money – which you’ll see in just a bit.

If the situation doesn’t immediately change its course, the entire continent could literally run out of energy this winter.

And no fiscal or monetary policy is going to help this time around.

In fact, the elites are already placing bets against Europe.

But make no mistake, this isn’t just a European problem.

If the worst-case scenario happens, global shortages and inflation will be on a scale we haven’t seen – even throughout this pandemic.

The good news is there’s still time to prepare.

But first, let’s look at what’s behind this European energy crunch.

Europe is dead reliant on Russia for its energy needs.

Natural gas is Europe’s second biggest source of energy – a lot of which comes from Russia.

For example, Germany, Europe’s superpower, imports two-thirds of its gas from Russia. And five Eastern bloc members, including the Czech Republic, Hungary, and Latvia, source virtually all their gas from Russia.

In all, Russia pumps out around 40% of Europe’s gas.

Nord Stream is the world’s longest natural gas pipeline stretching 745 miles under the Baltic Sea from Northwest Russia to Germany. It can pump out 1.9 trillion cubic feet of gas per year.

The pipeline is owned by Gazprom, a Kremlin-controlled gas giant that Putin uses as leverage to blackmail Europe into lifting sanctions. He’s been threatening to shut off Nord Stream unless the E.U. backs off or pays for gas in rubles.

In June, Nord Stream cut its gas flows to 40% of its capacity.

Then, during a regular mid-summer maintenance, the flow came to a full stop for ten days.

Finally, on July 21, it was restarted, but at only 40% of pre-maintenance levels.

In other words, since the beginning of the Russia-Ukraine war, Russia has scaled back Nord Stream operations to 20% of what it’s capable of pumping.

Of course, the Kremlin can’t use war as an excuse to shut off Europe’s gas – that wouldn’t look good.

So, instead it uses the rhetoric of technical difficulties and pinned the shut down on an ostensible “technical condition” with one of Nord Stream’s turbines.

​​”The pipeline is staying idle for annual maintenance from 11 to July 21. Sources told Reuters that Nord Stream is expected to resume gas exports as scheduled but at reduced capacity.

Speaking to reporters after his visit to Tehran, Putin said there were five gas pumping units, operated by Siemens Energy at Nord Stream 1, while one more unit was out of order due to “crumbling of inside lining.“

“There are two functioning machines there, they pump 60 million cubic metres per day … If one is not returned, there will be one, which is 30 million cubic metres. Has Gazprom something to do with that?” Putin said, adding that one more of the gas pumping turbines is due to be sent for maintenance on July 26.”

When asked about the repair timeline, Kremlin spokesman Dmitry Peskov couldn’t muster any ETA. All he could say was that the turbine had not arrived yet and would come “sooner rather than later.”

But the truth is, this disruption likely has nothing to do with repairs. Instead, it’s a deliberate squeeze plotted in advance.

Take a look at this chart from Goldman Sachs that proves Russia began turning off the tap way ahead of the maintenance:

The Kremlin doesn’t want to lose its “energy card” by letting Europe successfully restock its gas reserves before the winter.

And the most guaranteed way to prevent it, obviously, is to snap Europe’s main gas artery.

Stockpiling has begun, but it won’t be enough

Alarmed by Russia’s blackmail, the E.U. set out strict requirements for gas reserves to prevent a continent-wide blackout.

For example, Germany is seeking to fill 95% of its national reserves before November. And the E.U.’s underground gas storage facilities in Germany and the Netherlands are mandated to restock to 80% of their capacity.

Via the European Commission:

“The E.U. has also adopted new legislation requiring E.U. underground gas storage to be filled to 80% of capacity by November 1 2022 to ensure supply for the coming winter. In this context, the Commission has carried out an in-depth review of national preparedness plans to face possible major supply disruptions.”

There are only two ways Europe can pull that off without Nord Stream.

The first is rationing, which is already happening:

“The Commission is therefore proposing today a new legislative tool and a European Gas Demand Reduction Plan, to reduce gas use in Europe by 15% until next spring. All consumers, public administrations, households, owners of public buildings, power suppliers and industry can and should take measures to save gas.”

And second, it can import gas from other countries using liquefied natural gas terminals (LNG), which is happening too. In fact, Europe is now sourcing more gas from the U.S. through LNGs than from Nord Stream.

Rationing and LNGs are clearly moving the needle. In July, Europe’s gas reserves reached 52% of capacity, which is 9% higher than at the same time last year. But that won’t be enough.

A big part of the problem is that gas isn’t as easy to transport as other fossil fuels, such as coal or oil.

Apart from direct supply through pressurized pipelines like Nord Stream, natural gas has to be shipped in liquid form by special tankers, then turned back into gas when it arrives in the country (aka “regasification”).

This is a new supply model for which many E.U. countries aren’t ready. For example, Germany has no regasification infrastructure and can’t build one fast enough.

Jacob Kirkegaard, a senior fellow at the Peterson Institute for International Economics, wrote: “You’ve still got to get all the pipeline infrastructure laid. So it’s certainly not going to happen this year; it’s too late for this to be a relevant source of supply for Germany this winter, even if it will be a major role during the next one.”

So, if Russia pulls the plug on Nord Stream, neither rationing nor LNGs will last Europe through the winter because the lead time to wean the continent off of Nord Stream is just too long.

It’s obvious that energy prices are high, and will go higher if Nord Stream goes offline.

But price is actually the least of the concerns should Russia turn off the taps.

If it were simply a money issue, European governments could simply subsidize companies and households through deficit spending as they are already doing.

In fact, they are already paying a massive price.

According to a Reuters estimate, replenishing stock with LNG will set European governments back by $51 billion – 10x more than what they historically paid to stock up for winter.

The real threat here is that Europe can actually run out of gas, and have nowhere to buy it from in a timely manner. In that case, no amount of ECB printed money or deficit spending will help.

What happens if Europe runs out of energy?

According to Goldman Sach’s energy analysts, “Industries like chemicals and cement in Germany and Italy might have to cut their gas usage by as much as 80%.”

And get this: “Germany doesn’t have many options [for alternative gas supply], and we estimate it could mean a 65% industry curtailment in Germany if flows stopped coming entirely.”

If Russia makes good on its threat, it can bring 65% of Germany’s industry, the powerhouse of Europe, to a dead halt. Same for many other block members that rely on Russia for most of their energy imports.

Guess what happens next?

There will be all kinds of supply chain disruptions, resulting in another bout of global shortages and supply-driven inflation. And who knows, instead of going from 0% to 10%, inflation could go from 10% to 20%, or even higher this time.

Could Russia be bluffing?

Maybe, but it has already halted gas to three E.U. nations.

Earlier this year, the Nord Stream stopped pumping gas to Finland, Poland, and Bulgaria after they refused to pay for it in rubles.

So, what makes us think Putin won’t follow through with the rest of Europe?

A cold winter is coming

Europe could be headed for a winter so cold it will be written about in history textbooks.

Little by little, Russia is squeezing gas supply to Europe while biding its time to shut it off entirely—probably sometime in the fall when Europe is the most vulnerable to energy crunches.

Is it a coincidence that Turkey’s president Erdogan—a de facto mediator in the West-Russia spat—recently gave in to Russia and signed a deal to pay for its gas in rubles?

If Putin wants to bring Europe to its knees, he has a shot this winter. And the actions of those who know him very well, including Erdogan, show he won’t let this chance go to waste.

So don’t believe the media that Putin is losing – he has a major ace up his sleeve.

What does all this mean to most of us in North America?

Don’t get too excited about the supposedly falling inflation because if Europe goes into a blackout, this post-Covid inflation will look like a walk in the park compared to what’s coming.

It could be a volatile time for stocks and every other asset class. Meanwhile, gas prices may appear to have settled, but we suspect it will be higher in the coming months if Russia makes good on its threats. 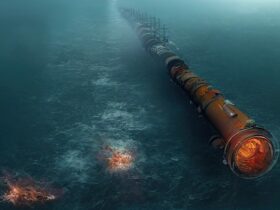