The real green revolution is finally here. While electric car stocks like Tesla have stolen the spotlight, there's an even bigger opportunity...

After years of talks, the world’s leaders have finally taken action. Last year, they budgeted trillions of dollars to shift away from fossil fuels for good. This sent green energy companies soaring. 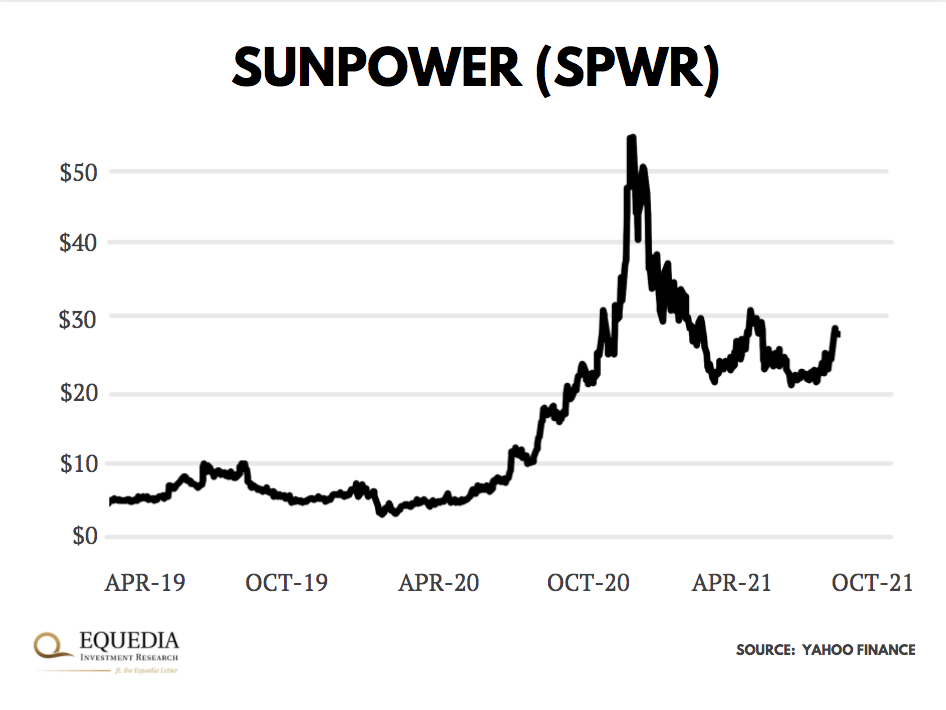 Or SunRun, another solar panel and battery maker: 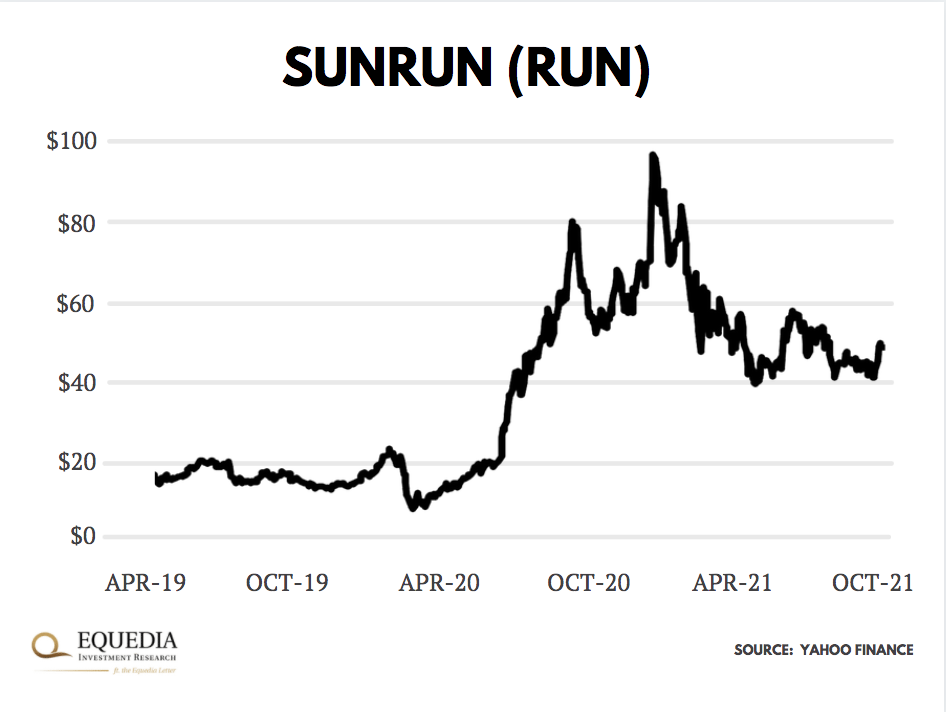 But while these stocks are commanding attention, they will claim just a mere fraction of the coming “green gold rush.”

That’s because the world will have to remold its entire infrastructure to harness green energy. This redo will cost over a hundred trillion dollars—and bring multi-fold bigger investment opportunities.

The green revolution is here. But…

Green is More Than Energy

For the internet to work, we first had to lay down millions of miles of telephone lines and fiber optic cable. (Fun fact: even today, transatlantic underwater cables carry most of the data on the internet.)

Then we built out a network of cell towers and data centers to transmit and store data online. And finally, we had to buy all sorts of new equipment – from modems to a multitude of ever-changing WIFI routers—to access that data.

And the buildout isn’t even close to being done.

5G towers are now springing up on every corner. And folks are replacing “offline” appliances with things like smart TVs and fridges, which they can control over the Internet.

Energy is no different.

The world as it is today wasn’t built with green energy in mind. Most of its infrastructures, such as buildings, energy grids, and industrial operations, run entirely off fossil fuels.

So, this transition is not just about tearing down oil wells and putting up a bunch of solar panels and wind turbines. It’s about making over the world’s entire infrastructure to distribute, store, and use that green energy.

And this buildout is going to be bigger than you can even imagine.

The Biggest Buildout in History

There are five key areas in the world’s infrastructure that very much rely on fossil fuels. And as governments begin to clamp down on CO2 emitters, these areas will have to invest trillions to “greenify” their operations.

Let’s begin with the most obvious.

Burning oil, gas, and coal is by far the #1 source of energy.

US Energy Information Administration (EIA) estimated that around 60% of electricity in the U.S. comes from fossil fuels. And most vehicles and industrial machinery still run on gas or diesel.

So, when combustion engines go into metal scrap yards, we’ll have to generate way more electricity to power their electric alternatives. According to the International Energy Agency (IEA), electricity demand will triple by 2050.

In other words, green plants won’t just be filling in for dirty electricity – they’ll have to generate 3X more electricity than fossil fuels do today.

And to meet this demand, they will have to quadruple their capacity from today’s levels—which will cost around $40 trillion, according to UBS’s calculations.

For example, Chevron, America’s oil giant, set out to spend a billion a year minimizing its operations’ carbon footprint and moving into green energy sources, such as hydrogen and solar.

Now, power generation from green sources is just one piece of the puzzle.

The world will also need to modernize its energy infrastructure. It will have to expand its power networks and build out storage systems and smart grids that can distribute largely intermittent green power consistently and efficiently.

Think smart sensors, meters, and systems with advanced forecasting capabilities. It’s like installing a smart thermostat in your home – but for the entire world.

Buildings have a massive carbon footprint, too.

According to the IEA, space heating/cooling, water heating, and home appliances that use energy from fossil fuels emit nearly one-third of all the CO2 in the air.

As part of the world’s greenification, we will see massive investments in building renovations…green heating systems, such as solar thermal panels or heat pumps…smarter, more efficient appliances, lighting, and cooling systems.

And don’t forget about heavy industries.

Think of all the trucks, power tools, and giant SciFi-like mining excavators – most of which run on gas or diesel. And it’s not just the machinery.

The production of industrial materials emits loads of CO2 through chemical reactions as well.

For example, cement is responsible for 8% of all CO2 in the air. If cement were a country, it would be the third-largest CO2 polluter in the world.

That means industrial businesses will have to restock their fleets with electric machinery—and invest in technologies that can capture more CO2 during industrial processes.

The last but not least polluter: transportation.

Passenger and freight vehicles, ships, and planes account for 24% of CO2 emissions. And to reach climate goals, IEA estimates that CO2 from all vehicles has to go down 90% by 2050.

Their fleets will be swapped out with green alternatives like electric cars and hydrogen trucks, and ships. And gas stations will turn into recharging and hydrogen fueling stations.

This buildout will cost $131 trillion—and energy will claim just a fraction of it.

The scale of this buildout is mind-boggling.

An internal UBS report estimated that we’ll spend $131 trillion by 2050 to adapt infrastructure for green energy. And the spending will start to pick up steam very soon: 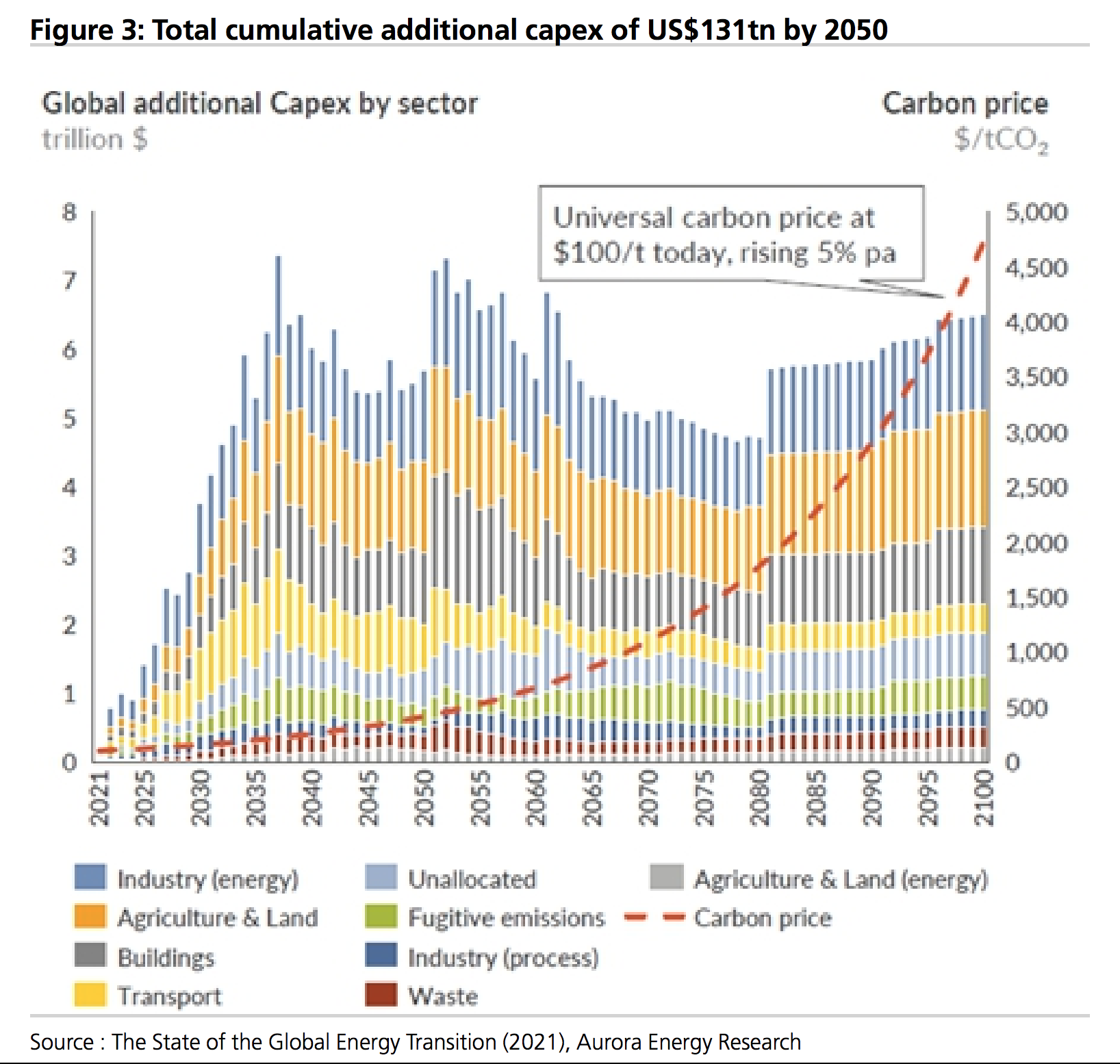 See what a relatively small part the energy sector plays in the green revolution?
A lot of investors are betting on energy stocks to cash in on this wave.

Yet, most of the money will go into infrastructure: green vehicle fleets, building renovations, sustainable agriculture/industry, and everything else in between.

Now for the multi-trillion dollar question: How do you invest in such massive spending?

In 1848, rumors spread about heaps of gold nuggets in the American River.

Before long, 300,000 Americans rushed to California, hoping to fill their pockets with gold. But most of them came home empty-handed.

Meanwhile, those who actually did make millions didn’t even get their feet wet.

Samuel Brannan was one of the first Gold Rush millionaires. He famously earned his fortune by selling picks, shovels, and pans to migrant miners.

Levi Strauss and Jacob Davis were another success story.

The entrepreneur duo made a killing selling miners rugged work pants made from blue denim. Later, they patented them as “the blue jean” we know and still wear today and became the billion-dollar fashion empire: Levis & Co.

This story has inspired a popular investment strategy called “pick and shovel investing.”

Imagine you’ve got a huge trend like, say, electric cars.

These mammoth trends are easy to spot and predict because they are inevitable. They attract truckloads of money and span decades.

The problem is, picking a stock that will make the most money in the end is like digging up a gold nugget in the American River. It’s an outright gamble.

So instead of betting all-in on stocks like Tesla (TSLA), you invest in established companies that supply tools and materials to the likes of Tesla.

If Tesla flops, there will be another Tesla because electric cars aren’t going anywhere. But the world will still need the “picks and shovels” to manufacture electric – or even hydrogen – vehicles.

And just like the Gold Rush millionaires, their suppliers will keep raking in money.

The Picks and Shovels of This Green Gold Rush

The “picks and shovels” of this green gold rush are so-called capital goods companies.

In short, they make stuff that other companies use to produce finished goods and services. It could be industrial machineries such as forklifts or metal presses… equipment such as high-pressure washers… tools, such as power screwdrivers… or simple materials such as steel and cement.

As a starting point for your research, here’s a few examples of stocks that supply capital goods for this multi-trillion dollar buildout:

Companies that make and install wind turbines, solar panels, or hydro equipment, such as GE (GE) or SunRun (RUN)

Companies that provide automotive/rail/marine equipment and green solutions like Alstom (ALO) or TE Connectivity (TEL)—as well as battery makers, such as Panasonic (TYO:6752)

Companies that make electric equipment, power tools, and machineries used in industrial operations, such as ABB (ABB) or Siemens (SIE)

And lastly, of course, the raw materials producers that will supply all of these industries. So if you think mining stocks are expensive, wait another few years – they’ll seem out of this world to you.

We are still in the first inning of this green gold rush. And I’m convinced these “picks and shovels” will cash in big time.

Remember, it’s better to be early than late. 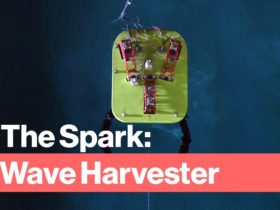 This Device Could Turn Waves Into Cheap, Renewable Energy

The oceans generate enough energy for us to give up coal and gas completely, but no one has been able to harness it effectively. Oscillate Power's Triton is a wave harvester that uses a novel design which may be the key to unlocking the power of the ocean.