Is Elon Musk the biggest pump and dumper in history?

It all started with Dogecoin, a cryptocurrency named after a famous Shiba Inu that began as a joke back in 2013.

A few years ago, Musk teased that Dogecoin might be his favorite cryptocurrency. Later he posted a meme implying it would become the standard of the global financial system. 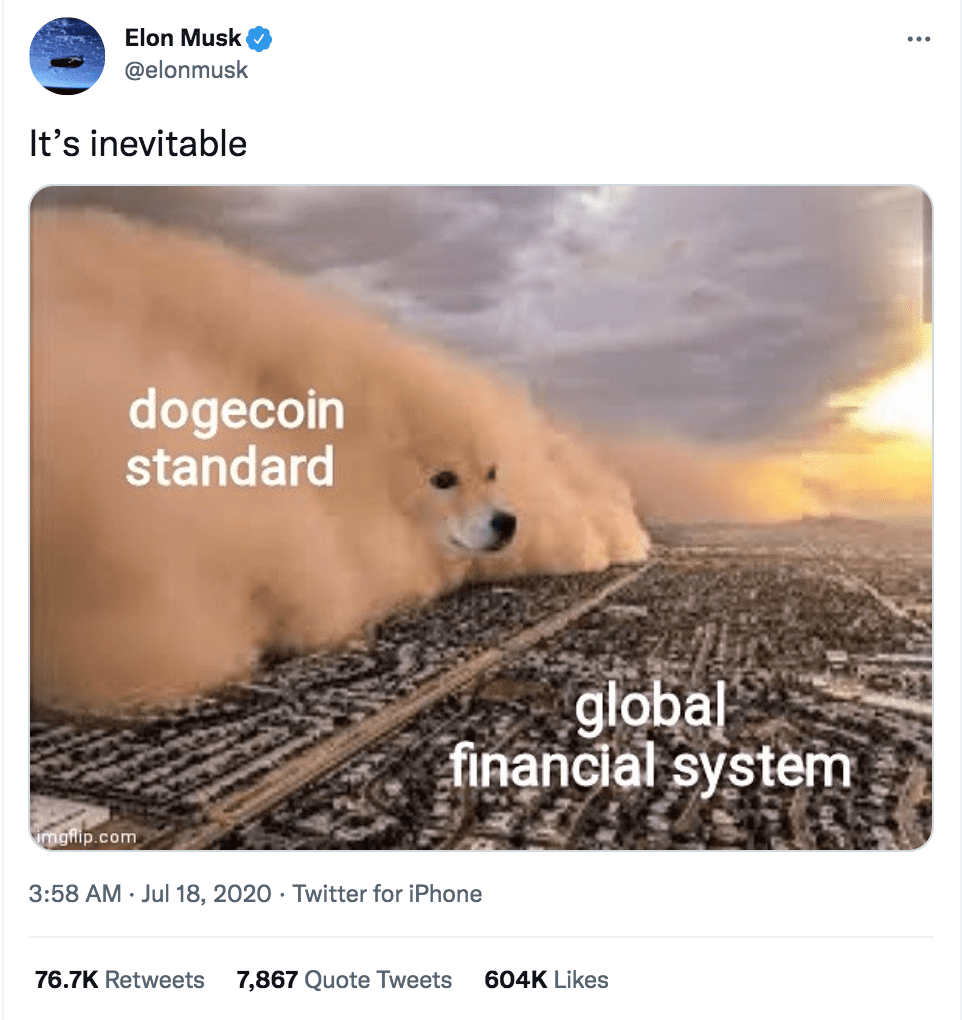 The satire caught on, so he took it up a notch.

Last year, he promised to launch a space mission with SpaceX paid entirely in Dogecoin and make history by sending the first cryptocurrency to the moon. 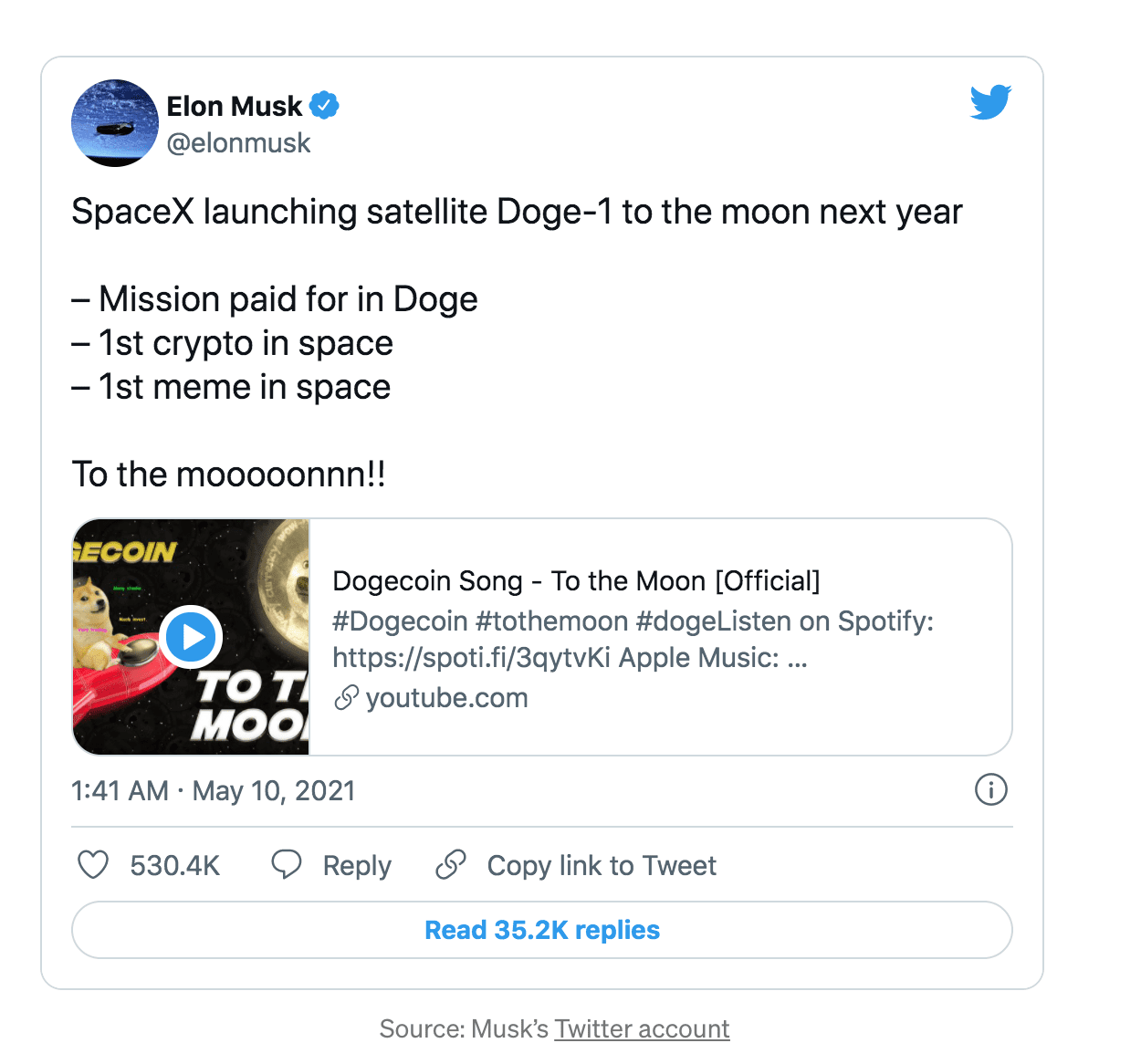 I am sure you already know that Dogecoin went bananas after Musk’s endorsement. Since his first tweet, the joke currency attracted $22 billion, soared 5,812%, and even inspired a whole new “asset class” of meme* coins.

In a similarly satirical but less direct way, Musk supported absurd coins with zero utility such as “Shiba Inu,” “Santa Floki” (coin named after his dog), and even the porn-related CumCoin—most of which attracted billions of dollars.

Now, I want to make one thing very clear.

Musk is a strategic “memester,” not a pump and dumper.

A lot of pundits roasted Musk for pumping and dumping cryptos.

I doubt that’s the case. Would he be that stupid? Risk it all for some extra bucks? He’s got enough money to not worry about making ends meet through dodgy financial schemes.

(Besides, Musk is an eccentric geek with a wry sense of humor. If he’s doing this just for sheer fun and the love of memes, honestly…I wouldn’t be that surprised.)

But in all likelihood, it’s all a strategic PR effort to earn free media, attract capital to Tesla, and divert investor attention from fundamentals, which won’t do any justice for its stock price.

Maybe he planned it all along. Maybe he discovered its power by chance and adopted it later. Or maybe, again, he’s just fooling around. I don’t know. But either way, it’s working.

Musk is all over the news. He’s Time’s “Person of the Year.” There’s a cult-tike obsession around him. And the obsessed invest their money in Tesla to the last penny with no regard for its fundamentals: 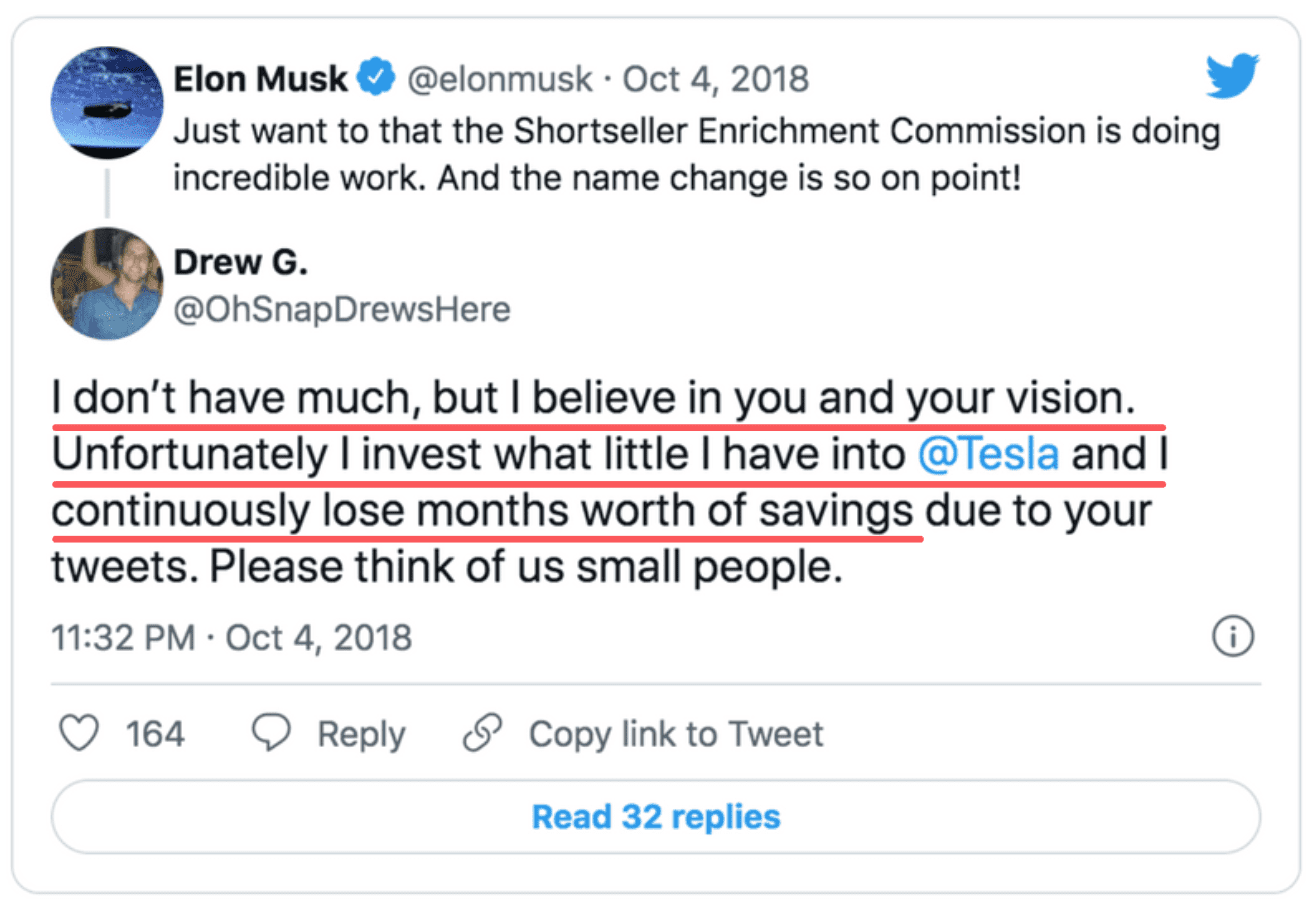 This is how Tesla can trade at a 400 multiple of earnings, and investors won’t bat an eye. And why Tesla is the most valuable car company on earth by making up just a mere 1% of global car sales.

(Side note: and it may work in the end. Musk might meme his way from a 400 P/E to a reasonable multiple that Wall Street subjects other stocks to, but that’s a topic for another day.)

Most crypto endorsements are a PR gimmick

It’s not just Musk who is exploiting crypto (or at least reaping its benefits) as a PR platform.

In August 2020, the Nasdaq-listed business intelligence company announced that it was buying $200 million worth of Bitcoin and adopting it as their reserve currency.

When the news broke, the then-obscure company became the talk of the town and soared 8X in a matter of months. And despite losing money for three back-to-back quarters, the company is still trading at record valuations: 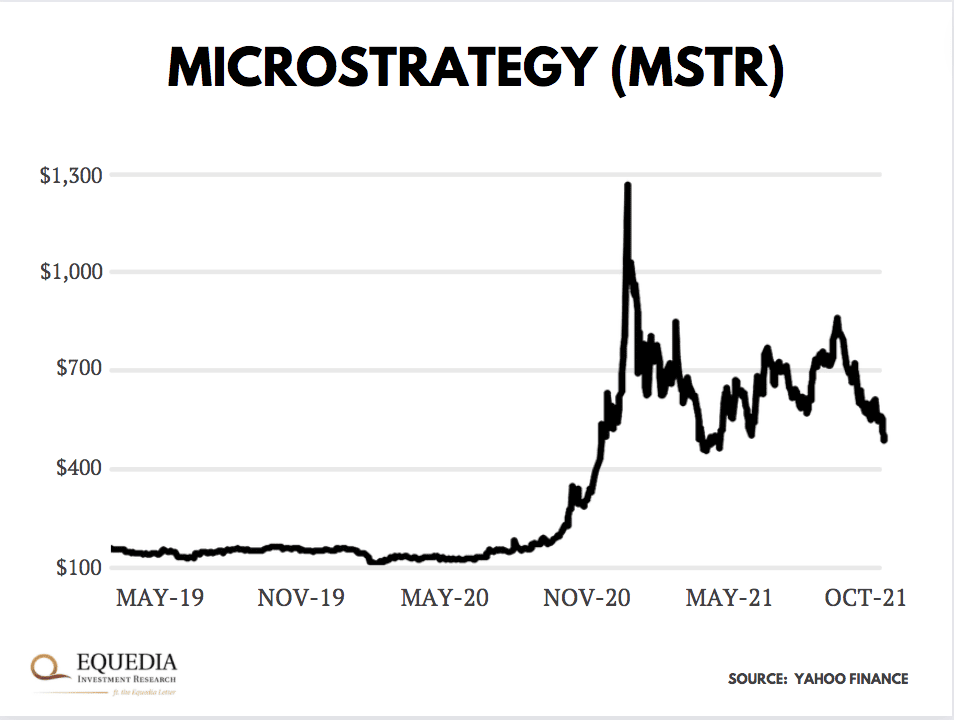 That’s over $4 billion in attracted capital at the expense of betting $200 million on a risky asset. A no-brainer wager if you ask me.

When PayPal announced it would let its customers trade crypto, its stock soared 50% in half a year. Let me stress: this is just on the crypto news because, to this day, its earnings haven’t budged higher since the announcement.

Even Mark Cuban began copycatting Musk. He endorsed Dogecoin as “the strongest cryptocurrency as a medium of exchange” and said that the Dallas Mavericks would accept Dogecoin for payment.

Later, he revealed that he owned only $490 worth of Dogecoin. So, why does a multi-millionaire own so little of a currency that’s supposed to be the “strongest medium of exchange”?

Think about it. All you have to do is utter the name of a nonsensical coin, even as a joke, and you’re all over the news. You are on Ellen. The headlines liken you to Musk.

That’s millions of dollars worth of free media and a hell of a stroke for your ego.

And the Academy Award for the biggest shill goes to…

While Musk and other billionaires may not risk their names with Ponzi schemes, their successful jokes inspired widespread shilling among celebrities.

Social media diva Kardashian shared an ad on her Instagram that read:

“Are you guys into crypto???? This is not financial advice but sharing what my friends just told me about the Ethereum Max token! A few minutes ago Ethereum Max burned 400 trillion tokens—literally 50% of their admin wallet, giving back to the entire e-max community. Swipe up to join the e-max community.”

Meanwhile, Paul Pierce got into full-on shill character. He claimed he was leaving ESPN because he made a fortune with EthereumMax. “I made more money with this crypto in the past month then [sic] I did with y’all in a year,” he tweeted.

During the promotion, the price of EthereumMax soared over 10X. But right after Kardashian’s post, its price fell off the cliff, leaving many investors in the red. Here’s a chart: 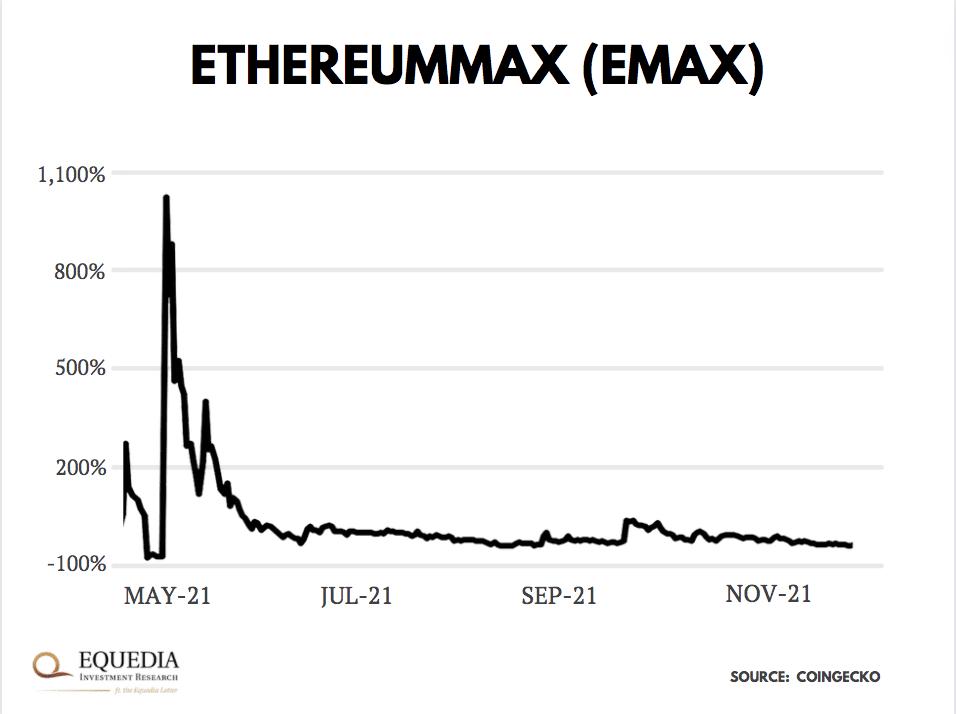 The coin hasn’t recovered to this day. If you bought it after Kardashian’s ad and didn’t flip fast enough, you were left with an utterly worthless asset.

And that’s just the tip. Hundreds of other celebrities—from social media stars to Hollywood actors—have been shilling their diehard fans coins that are obvious scams.

For example, actor Jamie Foxx endorsed Cobinhood, supposedly the Robinhood of crypto, to his 4+ million followers: 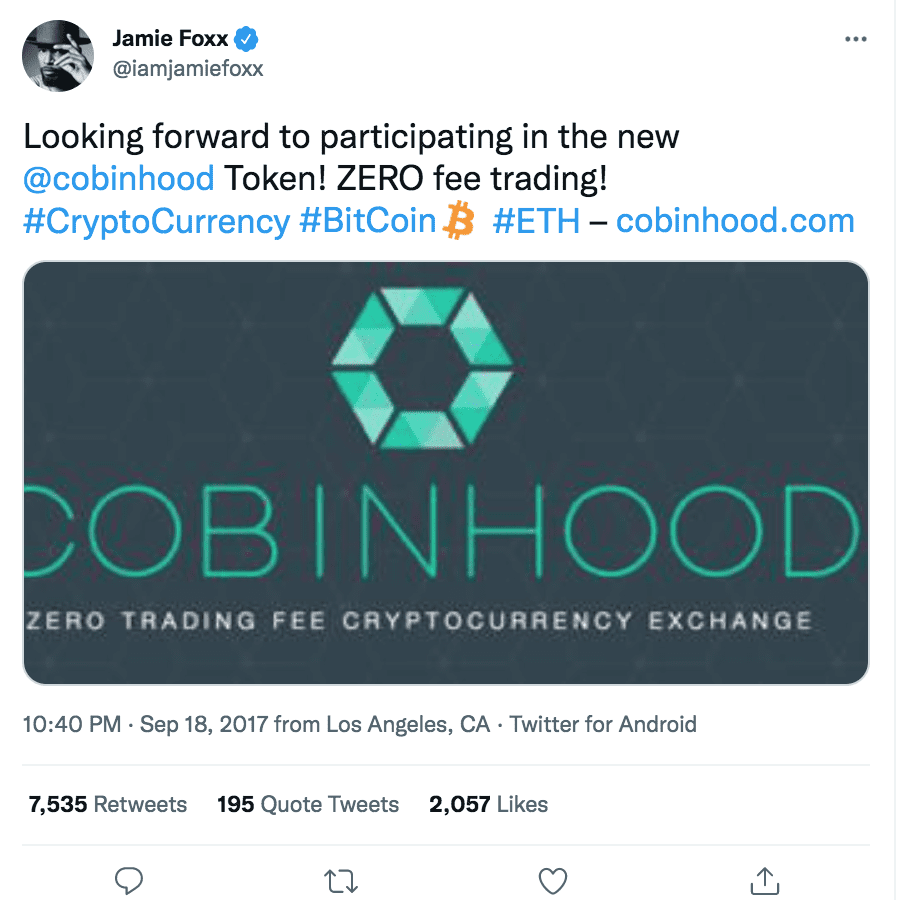 Where is this revolutionary exchange today? In the dump: 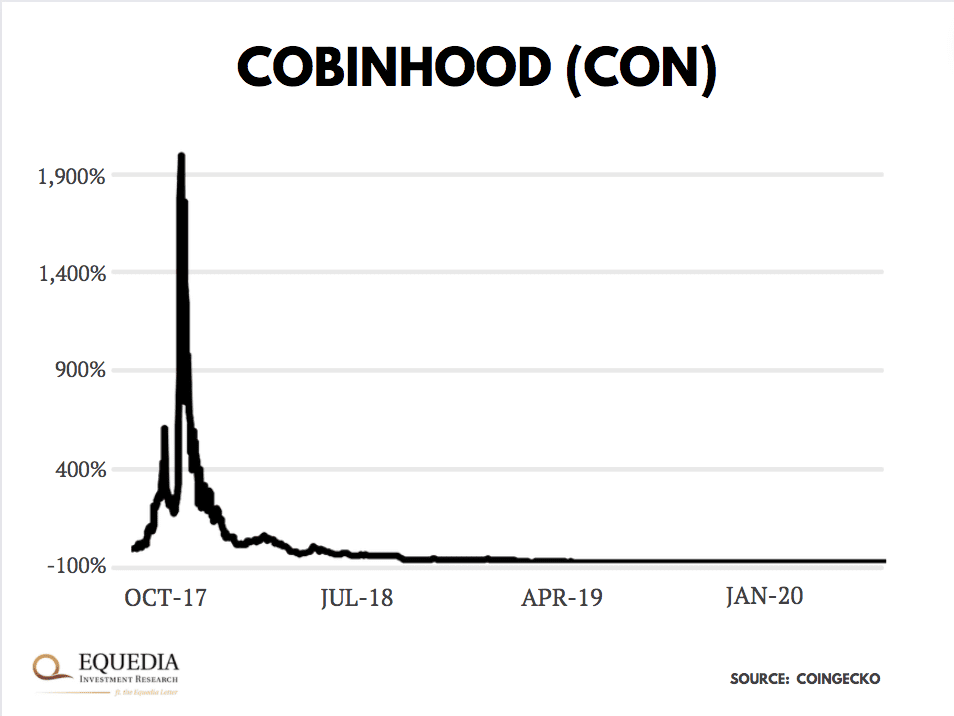 Jake Paul, one of the biggest Youtube stars, plugged SafeMoon, YummyCoin, and Dogecoin. Apart from Dogecoin, all his promoted coins soared ahead of the promotion and predictably nosedived afterward.

But the Academy Award for shill of the year goes to rapper Soulja Boy.

He did so much “due diligence” on his touted SafeMars coin that he didn’t even read the ad copy. In his tweet, he accidentally left the payment terms and exposed the scheme behind the coin: 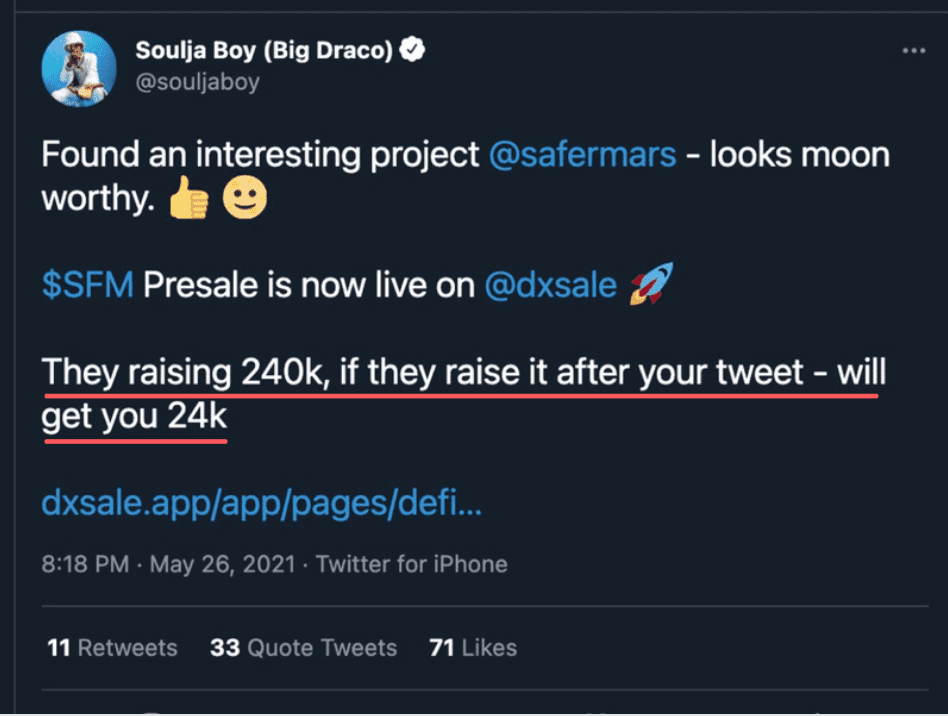 These are straight-up Ponzi schemes. And they are pushed by some of the most influential people in our society.

These celebrities are supposed to make art, box, chase balls, or do whatever they do to entertain people. They are in a privileged position to shape culture and make a change. Instead, they are shilling ***tcoins.

Pumping and dumping on pumpers and dumpers

Some pumpers and dumpers took these crypto Ponzi schemes even one step further.

They created private groups on Telegram and Discord messaging platforms that supposedly let you “Soulja Boy” your way into the riches by collectively pumping and dumping cryptos.

The mechanics are simple.

They announce a time when the whole group will snap up a certain coin and together pump up its price. Its appreciation will attract outside investors, and its price will shoot higher. Then the members will dump the coin for a hefty profit. 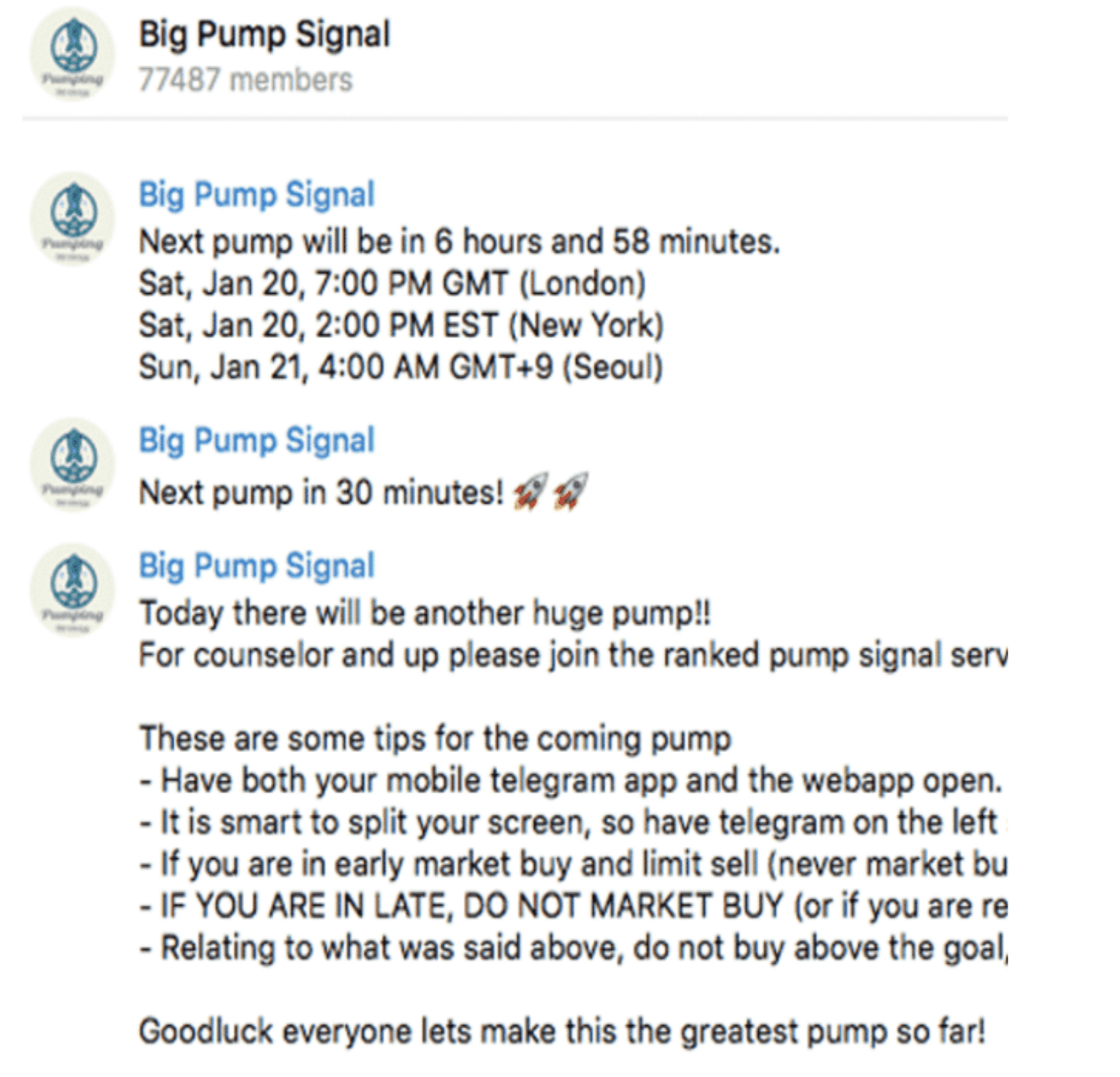 The interest in these groups is gaining, as you can see here with the search term “pump and dump crypto”: 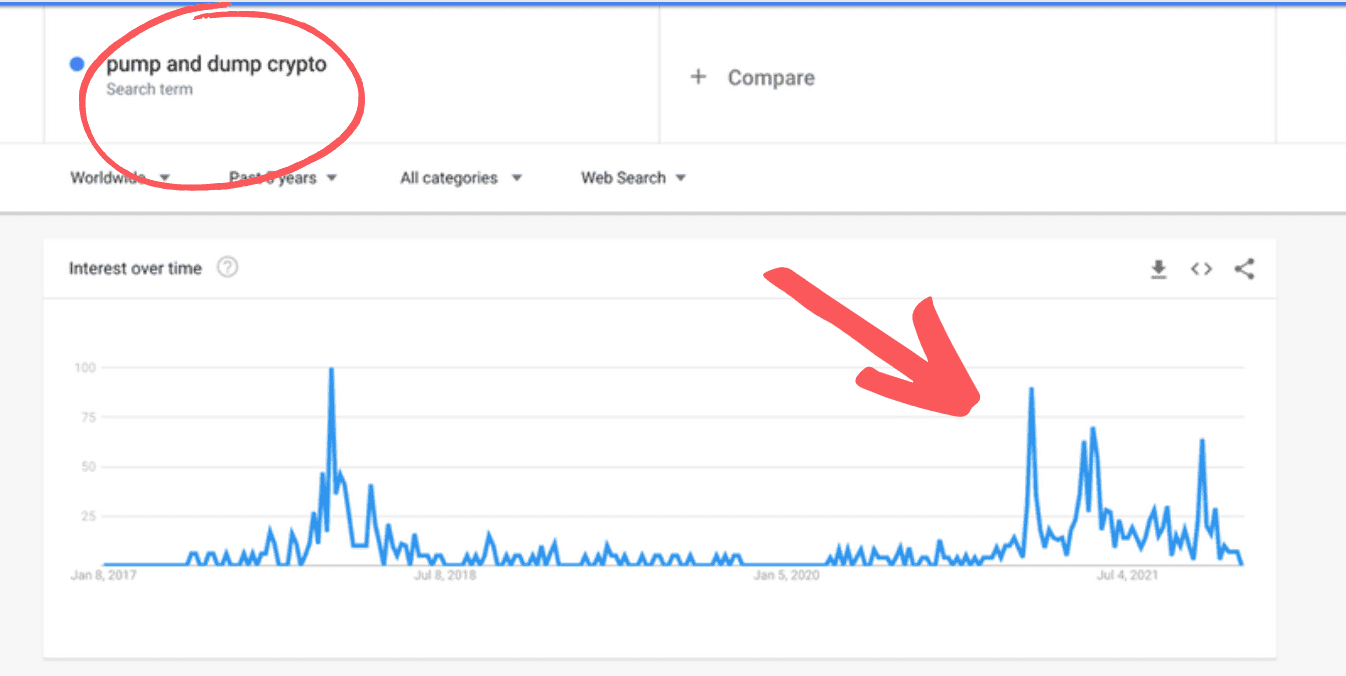 Yet, it’s the members of these groups who are the actual prey. By the time “the pump” crypto is announced, it’s already been bid up by those who run the group. There’s even an academic paper that blew the lid off this scam a while back.

They found that group insiders typically buy in early before the “signal.” Then they dump it at the time they instruct their members to buy. By their estimates, the post-pump prices of coins, on average, crater 38-41% from the pre-pump price.

In other words, most wannabe pump and dumpers lose money. I guess, you can say karma is a b****.

There’s a theory called the “boredom markets hypothesis.” It argues that people don’t invest money just for monetary reasons. Some view the markets as a casino and flip assets for sheer entertainment.

The theory is especially relevant today.

During Covid, developed nations hoarded a record pile of cash. And with the world still in partial lockdown, there was nowhere to spend it. So it makes sense that people choose to gamble some of that money for fun.

And there’s nothing wrong with that.

But when speculative assets become the talk of the town—even if for a joke—there’s a risk things will boil over and turn into a bubble. In fact, we’ve already seen two dangerous side effects.

First, while Musk may not mean harm, his memes empower hordes of shills who do. As we learned, they successfully exploit the Musk-induced crypto mania to push straight-up Ponzi schemes.

Then, this meme-driven crypto boom is deluding less internet humor-savvy people into plowing their savings into worthless coins and blowing themselves up. Every day I come across people who have taken this to extremes: 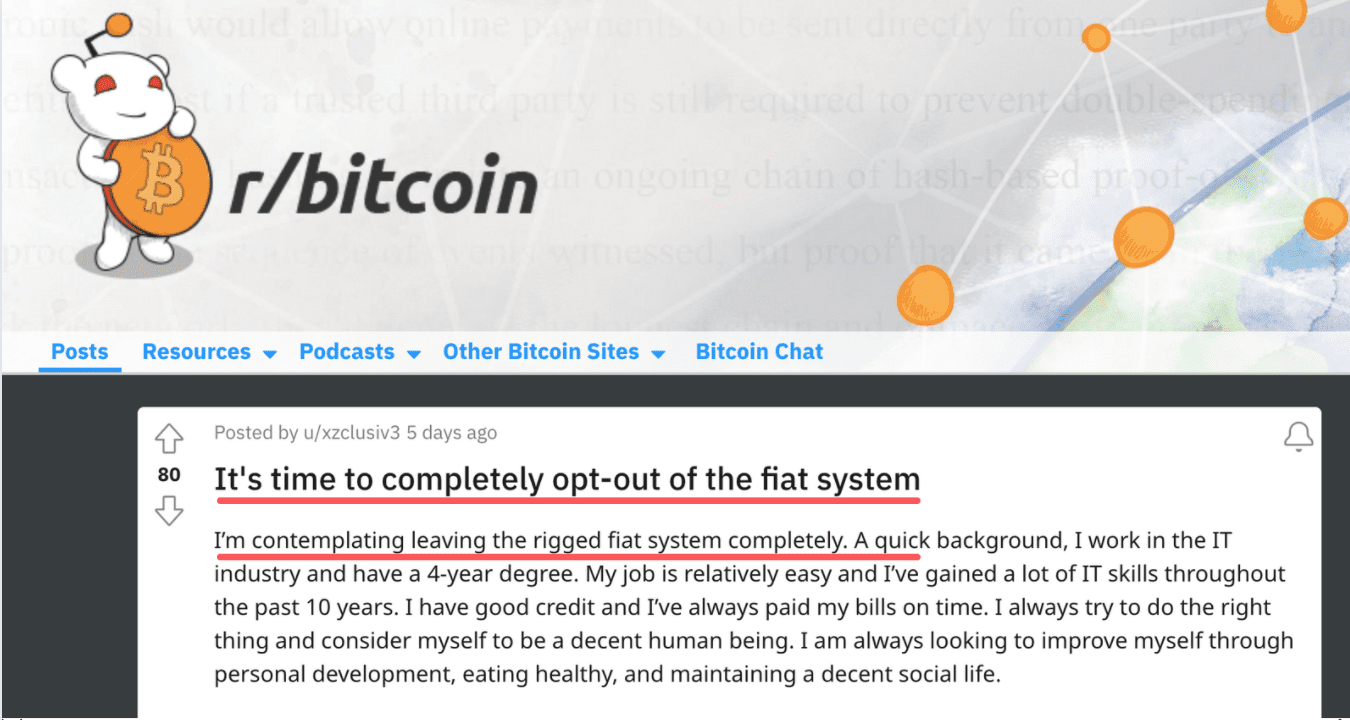 I mean, I get it, and we discussed this many times before: fiat is overly manipulated.

But betting your entire financial existence against the Fed?

It reminds me of that clueless kid in school who takes the joke seriously and ends up making a fool of himself.

My advice? Don’t be that clueless kid. 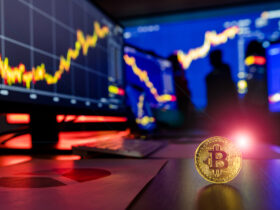 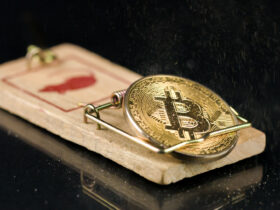 A look at Bitcoin's weekly chart shows Bitcoin testing a key support level. Here are the key levels to watch for.