Are you willing to inject an electronic neural net into your brain, in order to compete with super-intelligent robots?

If not, join the unemployment line.

That’s the message from ‘super villain in training’ Elon Musk, who is literally developing what he hopes is the next phase in human evolution.

Two years ago Tesla CEO Musk and Cambridge physicist Stephen Hawking were among the signatories to a dramatic open letter to the public at large.

They warned of the dangers they saw in the uncontrolled development of Artificial Intelligence (AI).

The always outspoken Musk went so far as to call Artificial Intelligence development “… summoning the demon.”

This of course ignores the fact he personally is developing AI for his self-driving cars.

“I don’t love the idea of being a house cat, but what’s the solution?” Musk famously asked in 2016.

The answer, says Musk, is to add computers and computer network links into your own brain.

Hopefully they come in some attractive designer colours.

“I think one of the solutions that seems maybe the best is to add an AI layer,” Musk said. “Something I think is going to be quite important—I don’t know of a company that’s working on it seriously—is a neural lace.”

As the Wall Street Journal reported in March, Musk has launched a company called Neuralink to develop a technology that essentially turns humans into artificially enhanced cyborgs.

Not much is yet known about the tech, but the idea is the neural lace allows the human brain to interact directly with computers.

The key technology is called the ‘neural lace’, which can be injected into the brain. It unfolds into the brain, and essentially acts as a link to a computer network.

The neural lace has already been used on mice in the lab. No word on how the rodent subjects are doing, but there’s a sci fi movie in there somewhere.

In the future, humans would be able to instantly perform complex mathematical calculations, summon up engineering designs in their heads, recite entire sonnets they’d never heard before, or collate and sift through relevant case law in seconds.

All this while their non-enhanced colleagues are still trying to boot up their laptops.

And this brings us back to the question; if you need to insert computer tech into your brain to keep your job … would you do it?

One of the many ethical problems now being considered by experts is a society in which some people – the haves – get all the best jobs because their intelligence is artificially enhanced.

The rest of humanity is largely unemployed, because their jobs have been taken over by robots or computers.

Movies and books have, of course, explored these issues for decades.

Isaac Asimov considered the relationship between humans and intelligent robots in his book iRobot, later turned into a pretty great movie.

The entire Terminator series is based on the idea of an aware computer network (Skynet) trying to kill off humanity and using killer robots to pick off the stragglers.

On the other side, the recent Ghost in the Shell movie (and the anime that preceded it) considers the idea of a human minds dropped into machine bodies … and whether they can be considered human at all. The terrifying thing about Musk’s theories is he might be right.

Specialized robots are expected to take away millions of jobs from humans over the next decade. In fact, the World Economic Forum predicts in its report “The Future of Jobs” that 5.1 million jobs would be taken over by machines between 2016 and 2020.

Amazon has created retail stores where there are no employees; just computers and automated security systems.

Factories like the one Nike uses now to make shoes will replace factory workers with computer-driven 3-D printers.

And it’s not just blue collar and fast food jobs that will disappear.

Database software companies are developing programs that put together legal cases and the backup case law almost instantly … meaning there will be a lot of unemployed lawyers.

Who knows? Maybe they can band together and sue the robots for workplace discrimination.

On a more sinister note, robots are now taking over the roles now played by soldiers.

Already there are drones that attack and kill human beings … but right now those are still controlled remotely by other human beings.

The next wave of weapon technology being built now sees the deployment of killer robots. It sounds like science fiction, but these robots exist in prototype today.

The difference is that, unlike drones, the robot makes the decision whether to kill or not to kill.

In 2013 the United Nations called for a halt to the development of all fully autonomous robotic weapons.

“The UN report makes it abundantly clear that we need to put the brakes on fully autonomous weapons, or civilians will pay the price in the future,” said Steve Goose, arms director at Human Rights Watch. “The US and every other country should endorse and carry out the UN call to stop any plans for killer robots in their tracks.”

The writer Isaac Asimov saw this dilemma coming, and in iRobot wrote the three laws of robotics:

Today, as the US and other countries are developing robotic weapons, Asimov’s idea that humans will limit the weaponized potential of their robots seems pretty naive.

Which leads us back to Elon Musk and his plan to turn humans into super-intelligent cyborgs.

For Musk the question is literally whether there is any role for humans in the future, or, at the very least, whether it’s computers or humans who call the shots.

In truth, Intelligence Augmentation (IA) can be achieved much more quickly than Artificial Intelligence (AI).

The only thing holding IA back are the current ethical conventions that would make it difficult to experiment with humans.

However, companies are already using IA devices to experiment with human-machine interaction. Primarily, these are neural links that allow injured humans to operate artificial hands or legs, or insert artificial eyes that restore sight.

In fact, the first cyborgs already walk among us.

British scientist Kevin Warwick became the first cyborg in 2002 when he had an array of 100 electrodes fired into his nervous system, which he uses to link his nervous system directly to the internet and remotely control a robotic hand.

Fellow British cyborg Neil Harbisson had an antenna implanted in his skull which allowed the colour blind artist to detect colours for the first time. The antenna also allows Harbisson to extend his perception of colour beyond the human visual spectrum, so he can, for example, detect infrared light.

There are also an estimated 20,000 cyborgs with microchips injected into their hands. These chips allow them to swipe cards, unlock doors, operate devices remotely or even buy products using cryptocurrency.

IS THERE ROOM FOR HUMANITY IN THE FUTURE?

Elon Musk and other futurists like Ray Kurzweil argue human evolution must move forward through technology, or humankind will fall behind the development of intelligent machines.

They believe machines will eventually become more intelligent than an ordinary human, and the only defence is to combine the power of computers with the human mind.

In this way Musk believes machines and computers will remain the servant of humankind, rather than the other way around.

All of which again raises the question; would you agree to have a computer network inserted into your skull? Or even more difficult, would you allow such a neural net to be inserted into the skull of your own child.

That decision may be years away, but it is coming, and sooner than most people think. 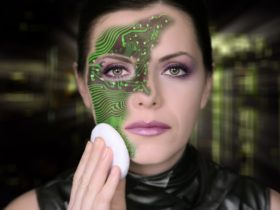 No matter who you are, your life is about to be irrevocably changed by artificial intelligence. Millions of jobs are going to vanish over the next 10 years, and unless new types of jobs are created, the unemployment rate in the industrialized world will skyrocket. Here's another look at our future with robots.