Development and Construction of the San Ramon Gold Mine and Mill

During the fourth quarter of 2016, construction and commissioning of the Mill was completed with first gold pour in November 2016.  The processing facility has reached a steady operating throughput capability and underground mining is progressing at an increasing rate with the opening up of additional ore development headings.

Underground development continues to advance well.  Since Q3 2016 when the decline moved through oxidized material, requiring additional support, into competent granodiorite, daily advance rates have substantially increased from 3 metres per day up to 27 metres per day.  The main and secondary ramps have advanced 2.4 kilometres from the portal.  A 57 metre vertical ventilation shaft has been completed and connected to the underground workings.

Initial poor ground conditions were encountered, particularly close to the saprolite contact and historic workings, resulting in slower mining rates and greater dilution than planned in startup.  Accordingly, the mining method has been adjusted to conventional mechanized cut and fill stoping, stope lengths have been reduced to 40 metres and ground controls are improving to minimize dilution.  The -100 and -125 metre levels are currently being mined with seven ore development headings.

The processing facility commissioning is complete and exceeding design throughput with the capability to process up to 1,200 tonnes per day.  The high voltage transmission line construction is complete and energized, connecting the project to the national electrical grid.  The dry waste management facility is complete with filtered tailings being dry stacked.  Gold recoveries have reached 93% and are on track to the design rate of 96%.

Operations have continued to adopt best practices in safety with many awareness programs in place and monitoring occurring on a continuous basis.  The results have been demonstrated in the safety statistics to date.

Red Eagle Mining continues to maintain positive relationships with and be involved with the local communities. Continuous information flow has been maintained with all stakeholders regarding the advances of the operations. Red Eagle Mining is committed to maximizing local employment and is proud to have already employed 56% of its workforce from the local municipality of Santa Rosa de Osos. Red Eagle Mining continues to strictly adhere to the terms of its Environmental License and the associated Environmental Management Plan. The Environmental Agency, along with local committees, has maintained a strict monitoring program as the project has progressed with visits at least monthly.  Red Eagle Mining has received positive inspection reports from all inspections.

23,666 tonnes of ore were processed during March (760 tonnes per day).  Higher grade ore was blended with lower grade stockpiles to ensure operating efficiency throughout the month.  1,758 ounces of gold were produced during March.

Exploration drilling is currently underway testing the eastern extent of the San Ramon Gold Deposit and multiple targets approximately 3 kilometres to the west of the processing facility.

In June 2016, Red Eagle Mining commenced detailed ore production stope delineation drilling at the San Ramon Gold Mine.  The 10,000m programme was drilled from eight surface pads spaced over 300 metres of strike length.  107 diamond drill holes (SRD-0001 to SRD-0107) were drilled on approximately 15 metre centres from surface to a vertical depth of 160 metres from surface.  The programme only in-fill drilled a portion of the reserves at the San Ramon Gold Mine which overall extend for two kilometres of strike length and to 250 metres depth.  The deposit is also open both at depth and on strike to the east where exploration drilling is currently underway.

Highlights from the programme include intercepts:

The following selected financial data is derived from the audited consolidated financial statements for the twelve months ended December 31, 2016, as prepared in accordance with International Financial Reporting Standards (all amounts in thousands of Canadian dollars, except per share amounts).

For the year ended December 31, 2016, Red Eagle Mining reported a net loss of $9.2 million (2015: $6.7 million. The net loss increased compared to the 2015 period primarily due to increased expenses associated with the ramp up of the San Ramon Gold Mine and Mill, which also resulted in the increased values of Total Assets and Shareholders’ Equity.  The increase in Total Liabilities primarily relates to amounts outstanding on the construction credit facility.

This press release should be read in conjunction with the consolidated financial statements and Management’s Discussion and Analysis for the year ended December 31, 2016.  These documents can be found on Red Eagle Mining‘s website or profile at www.sedar.com.

The technical information contained in this news release has been reviewed and approved by Red Eagle Mining’s Vice President of Exploration, Jeff Toohey P.Eng., who is a Qualified Person as defined under NI 43-101. 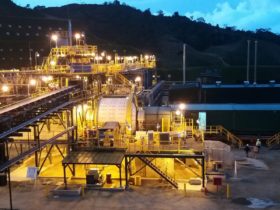 Red Eagle Mining Corporation (TSX: R, BVL: R, OTCQX: RDEMF) is pleased to provide an update on operations at the Santa Rosa Gold Project, Antioquia, Colombia and are pleased to have completed commissioning of the plant and producing 1,850 ounces of gold since start-up. 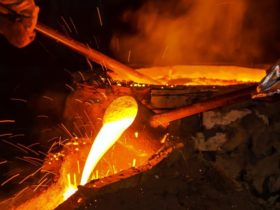 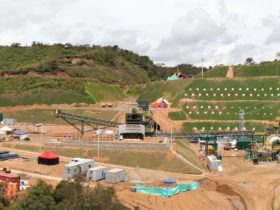 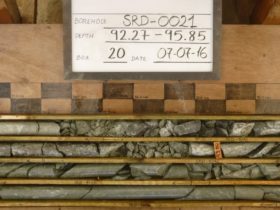