When you look at the rising costs of production and exploration for companies in the mining sector, you quickly come to understand just how risky many of them really are.

On the producer side, Barrick Gold, one of the world’s largest and lowest-cost gold producers, is expected to have an all-in-sustaining-cost per ounce of US$750 – $790 in 2016.

On the development side, the costs associated with getting a mine up and running are often astronomically high, with many costing hundreds of millions – sometimes billions – of dollars just to get started.

I haven’t even begun to talk about how much it costs just to find gold in the ground. This process on its own often costs millions upon millions of dollars and doesn’t even guarantee that you’ll find a deposit that can make money.

It is difficult to emphasize just how much money and work it takes to produce an ounce of gold. Which is precisely why many mines have shut down and why many gold producers have spent the last few years cutting costs.

But that’s precisely what makes what I am about to tell you so special.

Proof is in the PEA

(* The PEA is preliminary in nature and includes inferred mineral resources that are considered too speculative geologically to have the economic considerations applied to them that would enable them to be categorized as mineral reserves, and there is no certainty that the PEA will be realized.)

For those new to this story, K92 Mining Inc. (K92) is a gold company with a large land package covering 410 km² in Papua New Guinea (PNG).

It’s currently advancing the Kainantu Gold Mine, its flagship asset, located in the Eastern Highlands province of PNG, where it has just commenced production.

In fact, the first concentrate shipment deliveries are not only anticipated to start in just a few weeks, but the Company is also expected to reach steady-state operations with an annualised production rate of 52,000 Au per annum over the coming months.

But here’s where it gets interesting.

Just a few months ago, the Kainantu Gold Mine, comprised of the Kora and Irumafimpa Gold Deposit, was expected to produce 52,000/oz of gold per year.

Even then, the Company was undervalued when stacked against its peers on many metrics.

But with the new PEA, the production potential at the Kainantu Gold Mine has now doubled.

That’s just the tip of the iceberg.

In fact, the PEA shows that K92 may potentially be one of the most undervalued gold producers on the market today.

Take a look at some of these numbers yourself:

In other words, the PEA shows us that the Kora gold deposit could be put into production for less than US$14 million, produce over 100,000 ounces per year at some of the lowest cash and AISC costs in the world, and it can all be done with an incredibly healthy IRR of 113%

When you consider that an IRR above 30% is generally the benchmark for a healthy return, Kora’s 113% certainly stands out.

“This Kora PEA indicates not only the opportunity of a fast lead into gold equivalent production levels in excess of 100,000 ounces per year, but also the potential of better than expected cash flow, lowest quartile all-in sustaining costs per ounce, low initial capital costs with a short payback period.

It is also important to note that this PEA has been undertaken on the assumption that operations will ramp down at Irumafimpa once we commence production at Kora.

While the proposed Kora operation reflects excellent economics, it is worth noting that production at Irumafimpa is targeted at $650 per oz AISC and that at the proposed time for full production from Kora, there will still be circa 300,000 ounces in the mining inventory at Irumafimpa.

In addition to evaluating the potential of continuing production at Irumafimpa once Kora is online, we will also be testing the Kora expansion potential by drilling from underground set ups, scheduled to commence in the 1st quarter of 2017. Kora is not only open in all directions, but is strongly mineralized at the extent of all drilling.”

Not only does the PEA not account for the circa 300,000 ounces in the mining inventory at Irumafimpa, but it completely excludes one of the most important aspects of the project…

If you recall from my original report, the Kora deposit is not only open in all directions, but it has the potential to turn K92 into a 200,000/oz per year producer.

“…At the beginning of 2017, K92 is expected to begin the development of the exploration drive to Kora and by the end of that year, they should be directly underneath the deposit.

By the beginning of 2018, not only are they expected to have the Irumafimpa ore available for the process plant, they should be able to supplement that using the ore from Kora in the early part of 2018.

With the mill, they estimate they can get between 300-350k tonnes, but they’re only going to put 200k from Irumafimpa.

Here’s where the upside gets even bigger.

The ore body at Irumafimpa is roughly two meters on average width; at Kora, it’s five to six meters.

That means with upgrades, the mining rate at Kora can potentially increase to 200,000 ounces a year.

But that’s just the tip of the iceberg.

Kora – The Potential to Be Much Bigger

Take a look at this:

The orange section is Kora’s existing and known ore body.

The purple section is an expansion area that K92 is targeting for growth.

There are at least four bore holes that sit outside the known resource. If you look at some of the grades and intersections, you can see why there’s a lot to be excited about.

That’s the only deep hole that Barrick (the previous owner) ever drilled there!

Because these holes were drilled from the hillside, and that was expensive.

Drilling from underground is cheaper, faster, and less intrusive – meaning they don’t have to get agreements from the landowners.

So once K92 builds the Kora exploration drive, it will be able to drill from underground and explore what many believe to be a very large deposit.

But don’t take my word for it.

Alex Davidson was involved in approving the Kainantu sale to Barrick back in 2007, so he clearly believes that there is potential to find a lot more gold there.

Doug Kirwin is a former Executive Vice President at Ivanhoe Mines until its takeover by Rio Tinto in 2012 and was a member of the joint discovery team for the Hugo Dummett deposit at Oyu Tolgoi in Mongolia.

For those unfamiliar with the project, the Oyu Tolgoi project is the largest known deposit of copper and gold in the world.

Doug was also the co-recipient of PDAC’s inaugural Thayler Lindsley Medal awarded for most significant international mineral discovery in 2004.

He thinks that the existing Kora ore body, with the kind of extension we expect to see, could potentially grow much bigger, with multi-million-ounce potential:

“The structures hosting the lodes strike for several kilometres and have known vertical extents of hundreds of metres, and are open beyond this. This indicates multi-million ounce potential proximal the existing resource and the probability of discovering parallel veins is high. Further, when analyzing drill results, I was very impressed with the consistency of the high-grade drill intercepts at Kora. The ratio of high-grade hits is quite remarkable.”

If experts like Doug and Alex are even half right, than K92 could turn into something very big.

And remember, Barrick didn’t buy the Kainantu project for the small mine. They bought it for the potential of something much bigger…”

I believe management is on track to prove just that: the Kora deposit is much bigger than what it appears.

Not only has K92 now begun production on time and on budget, but it’s just told the world – through its Kora PEA – that it may soon become one of the world’s lowest-cost producers, with an enormous potential for growth.

Many would argue that even at that price, K92 shares were cheap.

But at the time of this writing, shares are trading at just $1.25.

So why are shares so heavily discounted, given everything that I just presented?

The most obvious is the fact that gold has been dragged down in recent weeks, taking gold stocks down with it.

The second is that most of the K92 shares from earlier financings – outside of founder shares – are now free trade. These shares are all “in-the-money” and investors have likely taken profits.

Furthermore, just the other day, K92 received $7.5 million in new capital via the exercise of 10 million warrants at $0.75. These warrants were forced and have likely been hitting the market since they are also “in-the-money.”

I have been watching for some time for K92 to bottom from the release of the shares from previous financings. Combined with the recent dip in gold prices , I believe we’re likely at that point.

From a corporate perspective, K92 is much more advanced than it was a few months ago when shares were trading above $2.

K92 has not only begun production on time and on budget, but it just announced a very promising PEA that shows it could soon become one of the world’s lowest cost gold producers, with serious exploration upside.

The Price of Gold

While there are some that believe gold may fall further, I believe we’re now range-bound and don’t expect gold to fall below US$1200.

Furthermore, it’s interesting to note that while gold and many gold shares haven fallen in recent weeks, actual money going into the sector continues to climb.

According to the World Gold Council, the first half of 2016 was the best on record with total gold demand rising 18% year-over-year to 2,335.5 tons.

For the first time on record, investment demand has been the largest component of gold demand for two consecutive quarters – fueled by Western demand across the board, from retail to institutional investors, and for bars, coins, and ETFs.

The last time we witnessed demand like this was in 2009. In the following years, gold prices more than doubled during that time.

This growing demand has continued throughout September, giving us strong signs that there is serious support for gold at these levels.Furthermore, central banks continue to be net buyers of gold, and more and more billionaire fund managers are telling the world that gold is a smart investment choice for our current economic and financial environment.

Billionaire Ray Dalio, for example, said at a seminar last week at the Federal Reserve Bank of New York that “while central banks around the world will probably extend bond-buying programs, making higher-yielding assets seem attractive relative to bonds and cash, those investments are still expensive relative to their inherent risk. If that persists, betting on gold could prove preferable.”

Disclosure: We’re biased towards K92 Mining Inc. because they are advertisers. You can do the math. Our reputation is built upon the companies we feature. It’s your money to invest and we don’t share in your profits or your losses, so please take responsibility for doing your own due diligence. Remember, past performance is not indicative of future performance. Just because many of the companies in our previous Equedia Reports have done well, doesn’t mean they all will. Furthermore, K92 and their management have no control over our editorial content and any opinions expressed are those of our own. We’re not obligated to write a report on any of our advertisers and we’re not obligated to talk about them just because they advertise with us. 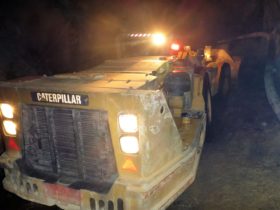 K92 Mining Gives an Update on the Kainantu Gold Mine Operations

K92 Mining Inc. gives us an update on the progress on the refurbishment and rehabilitation of its Kainantu Mine - it's on schedule and on budget. 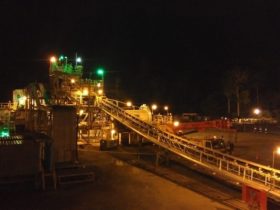 The last time I did this, readers saw a potential 95% return in less than a few weeks...Here's a look at K92 Mining Inc., a near term gold producer that could be much bigger than what it appears.