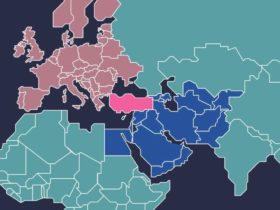 How Turkey Became a Nation Divided

A botched coup in July resulted in over 250 deaths as Turkey's military attempted to overthrow its president, Recep Tayyip Erdogan. He's a divisive figure in a country that is politically and geographically torn between East and West. Bloomberg QuickTake explains what this means for the people of Turkey and the nation itself on the international stage.